Diocesan offices are located in this office building on North Glebe Road. 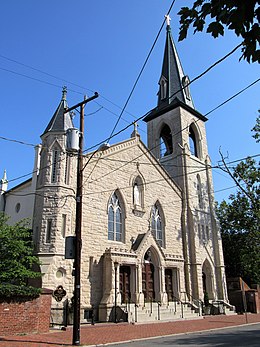 The diocese was canonically erected on May 28, 1974 by Pope Paul VI. [5] [6] The parishes which the Diocese of Arlington comprises were ceded from the neighboring Diocese of Richmond.

Until 2006, the diocese of Arlington was one of the American dioceses that did not allow female altar servers. As of 2020 [update], only the Diocese of Lincoln in the United States prohibits girls from becoming altar servers. [7]

Main article: List of churches in the Roman Catholic Diocese of Arlington

Other priest from the diocese who became bishop

On February 14, 2019, Bishop Michael F. Burbidge released a list of sixteen priests who had been credibly accused of sexual abuse in the Diocese of Arlington. [9] [10] In 2010, Rev. Felix Owino A.J. pled guilty to molesting an 11-year-old girl in Fairfax County. [11] In 2011, Owino was given a nine-month prison sentence, a five-year suspended prison sentence [12] and the chance of being deported back to his native country of Kenya. [11] By 2018, Owino had been deported. [13] [14] In March 2020, New Jersey priest Scott Asalone was arrested on charges of sexually abusing a teenager in Loudoun County, Virginia in 1985. [15] Washington D.C. councilman David Grosso publicly identified himself as the one who was sexually abused by Asalone. [16] [15]

Catholic Charities of the Diocese of Arlington

The Diocese co-ordinates and supports a range of charitable activities focused on assistance to the vulnerable, fund-raising and education. Initiatives include counselling, prison visits and foster care. [17] Archduchess Kathleen of Habsburg-Lorraine is a former communications director of the CCDA. [18]