Aria Resort and Casino is a luxury resort and casino, part of the CityCenter complex on the Las Vegas Strip in Paradise, Nevada. Aria consists of two curved glass and steel highrise towers adjoined at the center. It opened on December 16, 2009 as a joint venture between MGM Resorts International and Infinity World Development. At 4 million sq ft (370,000 m2) and 600 ft (180 m) in height, it is the largest and tallest structure at CityCenter.

Among the most notable aspects of Aria is its incorporation of technology in the exterior and interior design of the hotel, [4] specifically for the reduction of energy consumption. It is the largest hotel in the world to have earned LEED Gold certification. [5] On account of its smart rooms which automatically adjust curtains, turn off unused lights and electronics, and regulate the temperature when a guest enters or leaves a room, Aria was described in Popular Mechanics as possibly "the most technologically advanced hotel ever built". [6]

Construction as completed in 2009

Aria was conceived by MGM Mirage (now MGM Resorts International) [7] as part of the broader CityCenter development project, which was announced on November 10, 2004. The architectural design of Aria was conducted by Pelli Clarke Pelli Architects, and construction began in early 2006 on a plot of land located between the Bellagio and Monte Carlo. This site was previously occupied by the former Boardwalk Hotel and Casino, retail stores, and a large parking lot, all of which were excavated beginning in April 2006. Following excavation, Aria's foundation was poured in June 2006. Vertical progression commenced in September 2007, at which point construction workers built upwards at a rate of one floor every seven days until reaching the final height of 61 floors. [8]

Amid ongoing construction in 2007, Infinity World Development, a subsidiary of Dubai World, [9] invested about $2.7 billion to acquire a 50% stake in the CityCenter project. From this point on, Aria was jointly owned by MGM Resorts International and Infinity World Development, with MGM solely responsible for operations and management. The economic downturn and its ripple effects – including litigation – threatened to halt construction of Aria at one point in early 2009, [10] but an additional funding arrangement was made, allowing construction to continue on schedule. [11] The resort opened on December 16, 2009, in the same month as several other CityCenter properties such as The Crystals, an attached retail shopping complex. [12] [13]

The completed structure comprises two curvilinear glass towers, measuring 61 stories tall. [14] At the base of the connected high-rise towers is a casino and a three-story lobby that incorporates natural materials including foliage, flowers, glass, wood, and stone. [15] Aria's design is described as not adhering to an overarching theme, in contrast to themed resorts prevalent on the Las Vegas Strip. [16] [17] It was named Aria due to its placement as the central feature of CityCenter, as arias are focal points in operas. [18]

Aria lobby, with the Julian Serrano restaurant in background

Artwork is incorporated throughout the lobby and interior of the building. The main entrance contains a lighted water feature called "Lumia" created by WET, which syncs water bursts to music. [19] Maya Lin, designer of the Vietnam Veterans Memorial in Washington, D.C., created an 87 ft (27 m) reclaimed silver sculpture of the Colorado River called Silver River which is suspended behind Aria's hotel registration desk. [8] A result of its design, Aria is the largest hotel in the world to have received LEED Gold certification. [5]

Aria contains 4,004 hotel rooms within its 4 million sq ft (370,000 m2). [20] The suites make up 568 of the rooms, and a portion are referred to as Sky Suites, a AAA-5 Diamond and a Forbes Five Star hotel. Sky Suites are categorized separately since they are accessed via a private entrance and elevator, and include transportation between the hotel and airport in limousines fueled by compressed natural gas. [21] At the time of its opening in 2009, Aria was the 9th-largest hotel in the world as measured by the total number of rooms. [22] 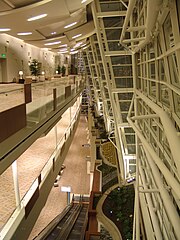 A three-story, 300,000 sq ft (28,000 m2) convention center includes four ballrooms (three with fully functioning theatrical stages), 38 meeting rooms and a three-story 400 ft (120 m) long window overlooking the pool. As of 2009, the window was the largest glass-curtain wall of its type ever constructed in a public building. An additional 900,000 sq ft (84,000 m2) is allocated for back-of-house areas, offices, and a subterranean parking garage. [25] In December 2015, Aria announced an expansion of its convention center with construction to begin in May 2016 and completed in February 2018. [26]

The only casino within the CityCenter complex is located at Aria. Its 150,000 sq ft (14,000 m2) of gaming space includes slots, poker, table games, and a race and sports book. [20] The gaming machines are controlled and monitored by a 3,000 sq ft (280 m2) data center and are changed to play the most popular games based on real-time data collected about the performance of each machine. [6] Exterior windows are present along the edges of the casino floor and skylights are part of the ceiling in the high-limit gaming area, differing from traditional casino design which historically omits natural light. [20] [27] Lemongrass, the first Thai restaurant to be opened on the Las Vegas Strip, is one of multiple restaurants located within the casino area. [28]

Photo of one of the pools

Located at the base of the Aria Casino is the 182,985 sq ft (16,999.9 m2) Pool Deck containing one large pool surrounded by tropical landscaping and multiple smaller pools. The general Pool Deck has a security kiosk and retail shop at the entrance as well as Salt & Ivy, Pool Bar, and 34 cabanas. The Pool Deck structures were designed by Graft's Los Angeles [29] office with structural engineering provided by Geiger Engineers, [30] exclusive of the Liquid Pool area. The cabanas are structural steel covered with tensile fabric. The Breeze Cafe and Pool Bar are sweeping canopies created by layering stucco on top of unusual curved steel skeletons. A separate outdoor pool area called LIQUID Pool Lounge was opened in March 2010. [31] The Breeze Café at Aria Pool Deck has since closed, but guests can order food pool-side from a limited menu via a waitress. 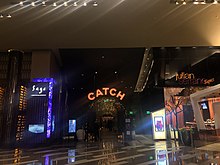 Sage (New American) by Chef Shawn McClain on the left, Catch Las Vegas (Asian-Fusion) in the center, and Julian Serrano (Spanish Tapas) by Chef Julian Serrano on the right located near the check-in desk at Aria Resort & Casino.

PokerGO Studio at the ARIA Resort and Casino

There are 16 restaurants as well as 10 bars and clubs within Aria, covering a total of about 250,000 sq ft (23,000 m2). [32] Julian Serrano, a tapas restaurant in the lobby named after its chef, was noted as one of Esquire Magazine's "20 Best New Restaurants in 2010". [33] Sage, described as a contemporary American restaurant, is also located in the lobby area. [34] Jean-Georges Steakhouse, run by Jean-Georges Vongerichten, is one of only nine restaurants in the United States that serve genuine Kobe beef. [35] Catch, a seafood and sushi restaurant known for drawing celebrities to its New York and Los Angeles locations, opened in 2018. [36]

Among the restaurants led by celebrity chefs that have previously operated at Aria were Masa Takayama's sushi eatery BarMasa and teppanyaki grill Tetsu (both closed in 2018), and Michael Mina's American Fish (closed in 2014). [37] [38]

Cirque du Soleil's Gold Lounge is located in the Aria Resort & Casino and is 3,756 square feet (349 m2). [40] The design is reminiscent of Elvis' mansion, Graceland, and black and gold are utilized extensively throughout the décor. The bar has the same shape as the bar in the Elvis mansion as well. [41] The music played changes throughout the night including upbeat Classic rock, commercial House music, Elvis remixes, minimal hip-hop, Top 40, and Pop. [42] As of mid-2015, Gold Lounge is closed for remodeling and undergoing a $4 Million makeover. [43] Jewel, will replace Haze as the new nightclub in Aria. It is set to open in March 2016.

In May 2018, Poker Central opened the PokerGO Studio at the ARIA Resort and Casino. This poker studio is a 10,000 square-foot space built to host live poker events distributed on the poker streaming service, PokerGO. Notable poker tournaments and cash games held at the PokerGO Studio include the Super High Roller Bowl, Poker Masters, U.S. Poker Open, Poker After Dark, and more. The PokerGO Studio is open to the public on an event-by-event basis. [44]

Zarkana at the Aria Resort and Casino