Midtown Manhattan is the central portion of the New York City borough of Manhattan and serves as the city's primary central business district. Midtown is home to some of the city's most prominent buildings, including the Empire State Building, the Chrysler Building, the Hudson Yards Redevelopment Project, the headquarters of the United Nations, Grand Central Terminal, and Rockefeller Center, as several prominent tourist destinations including Broadway, Times Square, and Koreatown. Penn Station in Midtown Manhattan is the busiest transportation hub in the Western Hemisphere. [5]

Midtown Manhattan is the largest central business district in the world and ranks among the most expensive locations for real estate; Fifth Avenue in Midtown Manhattan commands the world's highest retail rents, with average annual rents at US$3,000 per square foot ($32,000/m2) in 2017. [6] However, due to the high price of retail spaces in Midtown, there are also many vacant storefronts in the neighborhood. [7] Midtown is the country's largest commercial, entertainment, and media center, and also a growing financial center.

The majority of New York City's skyscrapers, including its tallest hotels and apartment towers, are in Midtown. The area hosts commuters and residents working in its offices, hotels, and retail establishments, tourists and students. Times Square, the brightly illuminated hub of the Broadway Theater District, [8] [9] [10] [11] [12] is a major center of the world's entertainment industry. [13] Sixth Avenue also has the headquarters of three of the four major U.S. television networks.

Midtown is part of Manhattan Community District 5. [2] It is patrolled by the 14th and 18th precincts of the New York City Police Department. 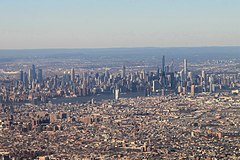 Geographically, the northern boundary of Midtown Manhattan is commonly defined to be 59th Street; its southern boundary is less clear, and variously taken to be 34th Street, 23rd Street, or even 14th Street. Midtown spans the entire island of Manhattan along an east–west axis, bounded by the East River on its east and the Hudson River to its west. The Encyclopedia of New York City defines Midtown as extending from 34th Street to 59th Street and from 3rd Avenue to 8th Avenue. [15] 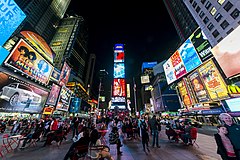 Times Square (2013), one of the world's busiest pedestrian intersections

Skyscrapers line Sixth Avenue in the heart of Midtown 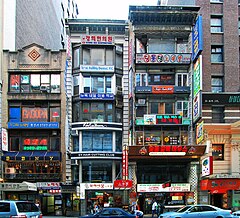 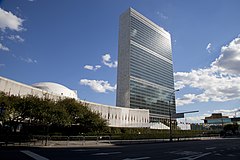 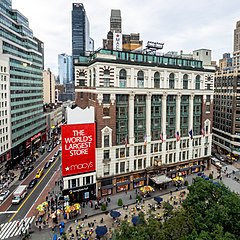 In addition to its central business district, Midtown Manhattan encompasses many neighborhoods, including Hell's Kitchen and Chelsea on the West Side, and Murray Hill, Kips Bay, Turtle Bay, and Gramercy Park on the East Side. It is sometimes broken into "Midtown East" and "Midtown West", or north and south as in the New York City Police Department's Midtown North and Midtown South precincts.

Neighborhoods in the Midtown area include the following:

Midtown is the original district in the United States to bear the name and included historical but now defunct neighborhoods such as the Ladies' Mile, along Fifth Avenue from 14th to 23rd Street; and the Tenderloin, from 23rd to 42nd Street and from Fifth Avenue to Seventh Avenue.

The border of Midtown Manhattan is nebulous and further confused by the fact that the term "Midtown Manhattan" can be used to refer either to a district or a group of neighborhoods and districts in Manhattan:

Midtown Manhattan, along with Lower Manhattan, is one of the world's leading financial centers.

Haier operates its United States offices in the Haier Building at 1356 Broadway, formerly the headquarters of the Greenwich Savings Bank. Haier held the opening ceremony on March 4, 2002. [60] Sumitomo Corporation operates its New York Office, the headquarters of the corporation's United States operations, at 600 Third Avenue, 10016 in the Murray Hill neighborhood. [61] El Al's North American headquarters are in Midtown. [62] The Air France USA regional headquarters are in 125 West 55th Street in Midtown Manhattan. [63] [64] Hachette Book Group USA has its headquarters in 237 Park Avenue. [65] In 1994 Alitalia considered moving its USA headquarters from Midtown to Lower Manhattan, but decided to keep the offices where they were at the last minute. [66] Global Infrastructure Partners has an office in Midtown Manhattan. [67]

Silicon Alley, the common metonym for New York City's high tech sector, is based in Midtown South, specifically the Flatiron District. Prominent Silicon Alley companies in Midtown include AppNexus, Blue Apron, Gilt, Betterment, Oscar, SoFi, Rent the Runway, Warby Parker, and WeWork. The technology sector has been expanding across Midtown Manhattan since 2010. [68] The biotechnology sector is also growing in Midtown Manhattan based upon the city's strength in academic scientific research and public and commercial financial support. By mid-2014, Accelerator, a biotech investment firm, had raised more than US$30 million from investors, including Eli Lilly and Company, Pfizer, and Johnson & Johnson, for initial funding to create biotechnology startups at the Alexandria Center for Life Science, which encompasses more than 700,000 square feet (65,000 m2) on East 29th Street and promotes collaboration among scientists and entrepreneurs at the center and with nearby academic, medical, and research institutions. The New York City Economic Development Corporation's Early Stage Life Sciences Funding Initiative and venture capital partners, including Celgene, General Electric Ventures, and Eli Lilly, committed a minimum of US$100 million to help launch 15 to 20 ventures in life sciences and biotechnology. [69]

Real estate is a major force in Midtown Manhattan's economy, and indeed the city's, as the total value of all New York City property was estimated at US$914.8 billion for the 2015 fiscal year. [70] Manhattan has perennially been home to some of the nation's, as well as the world's, most marketable real estate, including the Time Warner Center, which had the highest-listed market value in the city in 2006 at US$1.1 billion, [71] to be subsequently surpassed in October 2014 by the Waldorf Astoria New York, which became the most expensive hotel ever sold after being purchased by the Anbang Insurance Group, based in China, for US$1.95 billion. [72] When 450 Park Avenue was sold on July 2, 2007, for US$510 million, about US$1,589 per square foot (US$17,104/m2), it broke the barely month-old record for an American office building of US$1,476 per square foot (US$15,887/m2) based on the sale of 660 Madison Avenue. [73] In 2014, Manhattan was home to six of the top ten zip codes in the United States by median housing price. [74] In 2019, the most expensive home sale ever in the United States achieved completion in Midtown Manhattan, at a selling price of US$238 million, for a 24,000 square feet (2,200 m2) penthouse apartment overlooking Central Park. [75] 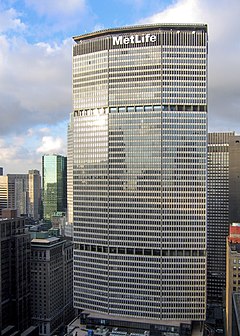 As of 2017, the median household income in Community Districts 4 and 5 (including Chelsea and Hell's Kitchen) was $101,981, [99] though the median income in Midtown individually was $120,854. [3] In 2018, an estimated 11% of Midtown Manhattan residents lived in poverty, compared to 14% in all of Manhattan and 20% in all of New York City. One in twenty residents (5%) were unemployed, compared to 7% in Manhattan and 9% in New York City. Rent burden, or the percentage of residents who have difficulty paying their rent, is 41% in Midtown Manhattan, compared to the boroughwide and citywide rates of 45% and 51% respectively. Based on this calculation, as of 2018 [update], Midtown Manhattan is considered to be high-income relative to the rest of the city and not gentrifying. [96]: 7 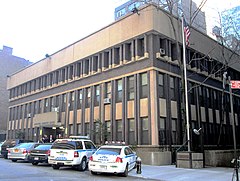 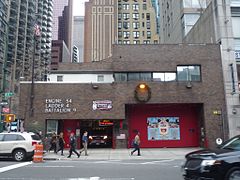 The main part of midtown Manhattan, between 34th and 59th Streets from Lexington Avenue to Eighth Avenue, is served by five fire stations of the New York City Fire Department (FDNY): [107] 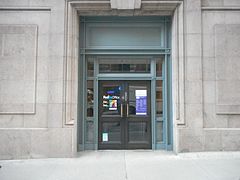 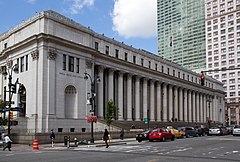 The James A. Farley Building

There are no public elementary or middle schools in Midtown. [127] 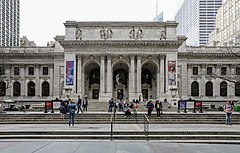 The New York Public Library (NYPL) operates the Stephen A. Schwarzman Building (also the Main Branch), a reference branch at 476 Fifth Avenue. The four-story building, constructed in 1911, is known worldwide for its architecture and has several million items in its collections. [135] There are also five circulating branches in Midtown: [136] [137] 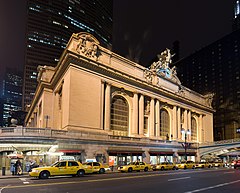 Pennsylvania Station and Grand Central Terminal are the two major railroad stations located in Midtown Manhattan. Penn Station serves Amtrak, NJ Transit, and the Long Island Rail Road (LIRR), while Grand Central serves the Metro-North Railroad and will serve the LIRR in the future. [146] Penn Station is considered to be the busiest transportation hub in the Western Hemisphere, servicing around 650,000 people per day. [147] [148]

The Port Authority Bus Terminal is located at Eighth Avenue and 41st Street at the western edge of Midtown. The terminal is the largest in the United States and busiest in the world by volume of traffic, serving more than 65 million people per year. [149]

Traffic congestion is common, especially for crosstown traffic. In 2011, a new system of traffic light control, known as "Midtown in Motion" was announced, with the aim of reducing traffic congestion. [152] Approximately 750,000 vehicles enter Midtown Manhattan on a fall business day. [153] According to the 2011 Traffic Data Report for New York State, 777,527 vehicles a day went through select toll facilities into Manhattan. [154]