From Wikipedia, the free encyclopedia
Overview of the government of New York City

The Government of New York City, headquartered at New York City Hall in Lower Manhattan, is organized under the New York City Charter and provides for a mayor-council system. The mayor is elected to a four-year term and is responsible for the administration of city government. The New York City Council is a unicameral body consisting of 51 members, each elected from a geographic district, normally for four-year terms. All elected officials—other than those elected before 2010, who are limited to three consecutive terms [1]—are subject to a two consecutive-term limit. [2] The court system consists of two citywide courts and three statewide courts.

New York City consists of five boroughs, each coterminous with one of five counties of New York State: Brooklyn is Kings County, the Bronx is Bronx County, Manhattan is New York County, Queens is Queens County, and Staten Island is Richmond County. When New York City was consolidated into its present form in 1898, all previous town and county governments within it were abolished in favor of the present five boroughs and a unified, centralized city government. [5] However, each county retains its own district attorney to prosecute crimes, and most of the court system is organized around the counties.

The executive branch of New York City consists of the Mayor, and numerous departments, boards and commissions. The Mayor also appoints several deputy mayors to head major offices within the executive branch of the city government. The City Record is the official journal published each weekday (except legal holidays) containing legal notices produced by city agencies, [6] [7] and regulations are compiled in the Rules of the City of New York. [8] 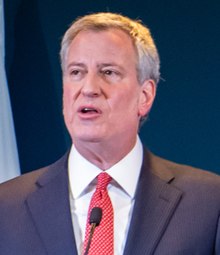 The Mayor is the chief executive officer of the city and a magistrate, [9] [10] appoints and removes all unelected officers and exercises all the powers vested in the city except otherwise provided by law, [11] [10] and is responsible for the effectiveness and integrity of city government operations. [10] The mayor is directly elected by popular vote for a four-year term. The mayor is also responsible for creating the city's budget through the New York City Mayor's Office of Management and Budget, submitted for approval, not drafting, to the Council.

Along with the mayor, the Public Advocate and the Comptroller are the only three directly elected citywide officials in New York City.

The Comptroller conducts performance and financial audits of all city agencies, serves as a fiduciary to the city's five public pension funds totaling nearly $160 billion in assets, provides comprehensive oversight of the city's budget and fiscal condition, reviews city contracts for integrity, accountability and fiscal compliance, manages the fair, efficient and effective resolution of claims against the city, ensures transparency and accountability in the prevailing wage rate-setting process and enforces prevailing wage and living wage laws. [14] [15] The Comptroller stands second, after the Public Advocate, in the line to succeed a mayor who has become unable to serve. [16]

Legislative power in the City of New York is vested in the New York City Council. The New York State Constitution empowers local governments to adopt local laws in addition to ordinances, resolutions, rules and regulations. [17] [18] [19] 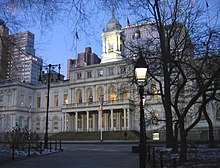 The Council is a unicameral body consisting of 51 Council members, whose districts are defined by geographic population boundaries that each contain approximately 157,000 people. Council members are elected every four years, except that after every census held in years divisible by twenty, districts are redrawn, requiring two consecutive two-year terms, the second of which is held in the redrawn districts. The Speaker of the Council, selected by the 51 Council members, is often considered the second most powerful post in New York City's government after the Mayor.

Bills passed by a simple majority are sent to the mayor, who may sign them into law. If the mayor vetoes a bill, the Council has 30 days to override the veto by a two-thirds majority vote. A local law has a status equivalent with a law enacted by the New York State Legislature (subject to certain exceptions and restrictions [20]), and is superior to the older forms of municipal legislation such as ordinances, resolutions, rules and regulations. [19] The codified local laws of New York City are contained in the New York City Administrative Code. [21] [22]

The Council has several committees with oversight of various functions of the city government. Each council member sits on at least three standing, select or subcommittees. The standing committees meet at least once per month. The Speaker of the Council, the Majority Leader, and the Minority Leader are all ex officio members of every committee.

Prior to 1990, the city also had a powerful Board of Estimate, a unique legislative-executive hybrid. Although it could not pass laws, it shared authority for the city budget with the council and controlled functions such as land use, municipal contracts, franchises, and water and sewer rates. The Board's membership consisted of the mayor, comptroller, president of the City Council, and the five borough presidents. The three citywide officials each cast two votes, and the borough presidents one each. In 1989, the Supreme Court of the United States struck down the Board of Estimate as violating the principle of "one man, one vote", due to the dramatically unequal numbers of constituents being represented by each borough president. The city subsequently adopted its current arrangement by referendum. [23] [24]

The state court system in New York City has two citywide courts, the Criminal Court and the Civil Court, and several statewide courts, the Supreme Court, Surrogate's Court, and Family Court. Unlike the rest of New York, New York City counties do not have a typical County Court. Each statewide court is located in each of New York City's five counties (boroughs). There are also numerous extrajudicial administrative courts, which are executive agencies and not part of the state Unified Court System. 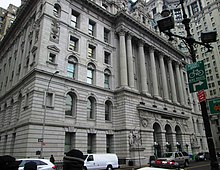 The Criminal Court of the City of New York handles misdemeanors (generally, crimes punishable by fine or imprisonment of up to one year) and lesser offenses, and also conducts arraignments (initial court appearances following arrest) and preliminary hearings in felony cases. [25] [26]

The Civil Court of the City of New York decides lawsuits involving claims for damages up to $25,000 and includes a small claims part for cases involving amounts up to $5,000 as well as a housing part for landlord-tenant matters, and also handles other civil matters referred by the Supreme Court. [25] [26] It handles about 25% of all the New York state and local courts' total filings. [27] 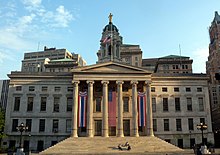 Each of the five boroughs has a borough board. [33] They are composed of the borough president, Council members from the borough, and the chairperson of each community board in the borough. [33] The borough boards can hold or conduct public or private hearings, adopt by-laws, prepare comprehensive and special purpose plans and make recommendations for land use and planning, mediate disputes and conflicts among two or more community boards, submit a comprehensive statement of the expense and capital budget priorities and needs, evaluate the progress of capital developments and the quality and quantity of services provided by agencies, and otherwise consider the needs of the borough. [34]

Each of the five counties of New York City elects a district attorney (DA) for a four-year term, [38] whose duty it is to prosecute all crimes and offenses cognizable by the courts of the county. [39] There is also a sixth DA, the Office of the Special Prosecutor for Narcotics, [40] who is unelected, but appointed by the five elected DAs. [41]

State Election Law defines the structure of political parties. It requires each party to have a state committee and allows them to organize county committees. [42] [43] [44] The county committees are composed of at least two members elected from each election district (containing a maximum of 950–1150 registered voters). The law also allows the election of assembly district leaders. [45] [44] The political parties' county executive committees typically select candidates for local offices, to be ratified by the full county committees. [44] Many small parties do not have county committees and designate candidates at the state level. The political parties' judicial nominating conventions select candidate New York Supreme Court justices. [46] Candidates for the citywide offices of mayor, comptroller and public advocate are designated jointly by the five county executive committees of each party. [47] In most cases, insurgents who are party members can challenge party-designated candidates by petitioning for a primary election.

The New York City Subway is managed by the Metropolitan Transportation Authority (MTA), which is a state public-benefit corporation.

The Metropolitan Transportation Authority (MTA) manages public transportation in the city, through its arm the New York City Transit Authority. Despite this name, the NYCTA, like the rest of the MTA, was created by the New York State Legislature as a public-benefit corporation, which the legislature and governor of New York control. The MTA also operates the Staten Island Railway within the city of New York, as well as the Long Island Rail Road and Metro-North Railroad, both of which are commuter lines that have termini in the city but run largely in the suburban counties of New York State and Connecticut.

The seal of New York City, adopted in an earlier form in 1686, bears the legend SIGILLVM CIVITATIS NOVI EBORACI, which means simply "The Seal of the City of New York". Eboracum was the Roman name for York, the titular seat of James II as Duke of York. The two supporters represent the unity between Native Americans and colonists, the four windmill sails recall the city's Dutch history as New Amsterdam, and the beavers and flour barrels the city's earliest trade goods (see History of New York City). The crest over the seal is the American eagle, added after the American Revolution. "1625", the date at the bottom, was chosen to emphasize the city's Dutch roots but has been characterized as "arbitrary" and "simply wrong" by notable city historians (New Amsterdam was actually settled in 1624). [49]

The flag of New York City was adopted in 1915. Its blue, white, and orange bands represent the colors of the Dutch flag that flew over the city, then New Amsterdam, between the 1620s and 1660s. Located in the center is a blue print of the official Seal of New York City minus its Latin motto. [50]

There are two official variants of the New York City flag. The Mayor's Office version adds an arc of five five-pointed stars (representing each of the five boroughs) in blue above the seal, and the Councilmanic version adds the word "COUNCIL" in blue below the seal. [50]