From Wikipedia, the free encyclopedia
For other uses, see Carnegie Hall (disambiguation).
Not to be confused with Carnegie Hill.

Designed by architect William Burnet Tuthill and built by philanthropist Andrew Carnegie in 1891, it is one of the most prestigious venues in the world for both classical music and popular music. Carnegie Hall has its own artistic programming, development, and marketing departments, and presents about 250 performances each season. It is also rented out to performing groups. The hall has not had a resident company since 1962, when the New York Philharmonic moved to Lincoln Center's Philharmonic Hall (renamed Avery Fisher Hall in 1973 and David Geffen Hall in 2015). [7]

Carnegie Hall has 3,671 seats, divided among its three auditoriums.

Carnegie Hall is composed of three structures arranged in an "L" shape; each structure contains one of the hall's performance spaces. The original building, which houses the Isaac Stern Auditorium, is an eight-story rectangular building, designed by William Tuthill at the corner of 7th Avenue and 57th Street. The 16-story eastern wing contains the Weill Recital Hall and is located along 57th Street. The 13-story southern wing, at 7th Avenue and 56th Street, contains Zankel Hall. [8] 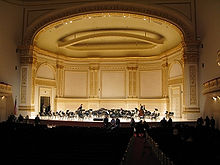 The Isaac Stern Auditorium seats 2,804 on five levels and was named after violinist Isaac Stern in 1997 to recognize his efforts to save the hall from demolition in the 1960s. [9] The hall is six stories high with five levels of seating; [8] visitors to the top balcony must climb 137 steps. All but the top level can be reached by elevator. [10]

The main hall was home to the performances of the New York Philharmonic from 1892 until 1962. Known as the most prestigious concert stage in the US, almost all of the leading classical music and, more recently, popular music performers since 1891 have performed there. After years of heavy wear and tear, the hall was extensively renovated in 1986 (see below).

The Ronald O. Perelman Stage is 42 feet deep. The five levels of seating in the Stern Auditorium begin with the Parquet level, which has twenty-five full rows of thirty-eight seats and four partial rows at stage level, for a total of 1,021 seats. The First Tier and Second Tier consist of sixty-five boxes; the First Tier has 264 seats at eight seats per box and the Second Tier seats 238, with boxes ranging from six to eight seats each. Second from the top is the Dress Circle, seating 444 in six rows; the first two rows form an almost-complete semicircle. At the top, the balcony seats 837. Although seats with obstructed views exist throughout the auditorium, only the Dress Circle level has structural columns. [11]

Zankel Hall, which seats 599, is named after Judy and Arthur Zankel. Originally called simply Recital Hall, this was the first auditorium to open to the public in April 1891. Following renovations made in 1896, it was renamed Carnegie Lyceum. It was leased to the American Academy of Dramatic Arts in 1898 and converted into a cinema, which opened as the Carnegie Hall Cinema in May 1961 with the film White Nights by Luchino Visconti. It was reclaimed for use as a performance space in 1997. The completely reconstructed Zankel Hall is flexible in design and can be reconfigured in several different arrangements to suit the needs of the performers. It opened in September 2003. [12] [13]

The Weill Recital Hall is the smallest of the three performance spaces, with a total of 268 seats. The Orchestra level contains fourteen rows of fourteen seats, a total of 196, and the Balcony level contains 72 seats in five rows. [15]

The building also contains the Carnegie Hall Archives, established in 1986, and the Rose Museum, which opened in 1991. Until 2009 studios above the Hall contained working spaces for artists in the performing and graphic arts including music, drama, dance, as well as architects, playwrights, literary agents, photographers and painters. The spaces were unusual in being purpose-designed for artistic work, with very high ceilings, skylights and large windows for natural light. In 2007 the Carnegie Hall Corporation announced plans to evict the 33 remaining studio residents, some of whom had been in the building since the 1950s, including celebrity portrait photographer Editta Sherman and fashion photographer Bill Cunningham. The organization's research showed that Andrew Carnegie had always considered the spaces as a source of income to support the hall and its activities. The space has been re-purposed for music education and corporate offices. [16] [17] 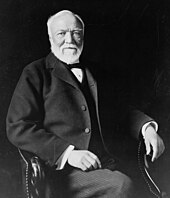 Carnegie Hall is named after Andrew Carnegie, who funded its construction. It was intended as a venue for the Oratorio Society of New York and the New York Symphony Society, on whose boards Carnegie served. Construction began in 1890, and was carried out by Isaac A. Hopper and Company. Although the building was in use from April 1891, the official opening night was May 5, with a concert conducted by Walter Damrosch and Russian composer Pyotr Ilyich Tchaikovsky. [18] [19] 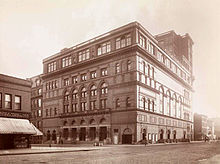 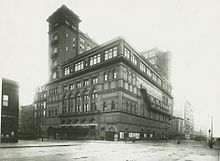 The hall was owned by the Carnegie family until 1925, when Carnegie's widow sold it to a real estate developer, Robert E. Simon. When Simon died in 1935, his son, Robert E. Simon, Jr., became owner. By the mid-1950s, changes in the music business prompted Simon to offer Carnegie Hall for sale to the New York Philharmonic, which booked a majority of the hall's concert dates each year. The orchestra declined, since it planned to move to Lincoln Center, then in the early stages of planning. At the time, it was widely believed that New York City could not support two major concert venues. Facing the loss of the hall's primary tenant, Simon was forced to offer the building for sale. A deal with a commercial developer fell through, and in 1957, with the New York Philharmonic on the move to Lincoln Center, the building was slated for demolition to make way for a commercial skyscraper. [20] Under pressure from a group led by violinist Isaac Stern and many of the artist residents, special legislation was passed that allowed the City of New York to buy the site from Simon for $5 million (which he would use to establish Reston, VA), and in May 1960 the nonprofit Carnegie Hall Corporation was created to run the venue. It was designated a National Historic Landmark in 1962. [3] [21] [22]

The building was extensively renovated in 1986 and 2003, by James Stewart Polshek, who became better known through his post-modern planetarium at the American Museum of Natural History. Polshek and his firm, Polshek Partnership, were involved since 1978 in four phases of the Hall's renovation and expansion including the creation of a Master Plan in 1980; the actual renovation of the main hall, the Stern Auditorium, and the creation of the Weill Recital Hall and Kaplan Rehearsal Space, all in 1986; [23] the creation of the Rose Museum, East Room and Club Room (later renamed Rohatyn Room and Shorin Club Room, respectively), all in 1991; and, most recently, the creation of Zankel Hall in 2003. [12] [13]

The renovation was not without controversy. Following completion of work on the main auditorium in 1986, there were complaints that the famous acoustics of the hall had been diminished. [24] Although officials involved in the renovation denied that there was any change, complaints persisted for the next nine years. In 1995, the cause of the problem was discovered to be a slab of concrete under the stage. The slab was subsequently removed. [25]

In June 2003, tentative plans were made for the Philharmonic to return to Carnegie Hall beginning in 2006, and for the orchestra to merge its business operations with those of the venue. However, the two groups abandoned these plans later in 2003. [26]

In 2014, Carnegie Hall opened its Judith and Burton Resnick Education Wing, which houses 24 music rooms, one of which is large enough to hold an orchestra or a chorus. The $230 million project was funded with gifts from Joan and Sanford I. Weill and the Weill Family Fund, Judith and Burton Resnick, Lily Safra and other donors, as well as $52.2 million from the city, $11 million from the state and $56.5 million from bonds issued through the Trust for Cultural Resources of the City of New York. [27]

Most of the greatest performers of classical music since the time Carnegie Hall was built have performed in the Main Hall, and its lobbies are adorned with signed portraits and memorabilia. The NBC Symphony Orchestra, conducted by Arturo Toscanini, frequently recorded in the Main Hall for RCA Victor. On November 14, 1943, the 25-year old Leonard Bernstein had his major conducting debut when he had to substitute for a suddenly ill Bruno Walter in a concert that was broadcast by CBS, [28] making him instantly famous. In the fall of 1950, the orchestra's weekly broadcast concerts were moved there until the orchestra disbanded in 1954. Several of the concerts were televised by NBC, preserved on kinescopes, and have been released on home video.

The hall has also been the site of many famous lectures, including the Tuskegee Institute Silver Anniversary Lecture by Booker T. Washington, and the last public lecture by Mark Twain, both in 1906.

Rock and roll music first came to Carnegie Hall when Bill Haley & His Comets appeared in a variety benefit concert on May 6, 1955. [31] Rock acts were not regularly booked at the Hall however, until February 12, 1964, when The Beatles performed two shows [32] during their historic first trip to the United States. [33] Promoter Sid Bernstein convinced Carnegie officials that allowing a Beatles concert at the venue "would further international understanding" between the United States and Great Britain. [34] " Led Zeppelin became the first hard rock act to play Carnegie Hall since the Rolling Stones tore the place up some five years ago." Two concerts were performed October 17, 1969. [35] Since then numerous rock, blues, jazz and country performers have appeared at the hall every season. [36] Jethro Tull released the tapes recorded on its presentation in a 1970 Benefit concert, in the 2010 re-release of the Stand Up album. Ike & Tina Turner performed a concert April 1, 1971, which resulted in their album What You Hear is What You Get. The Beach Boys played concerts in 1971 and 1972, and two songs from the show appeared on their Endless Harmony Soundtrack. Chicago recorded its 4-LP box set Chicago at Carnegie Hall in 1971. European folk dance music first came to Carnegie Hall when concert of Yugoslav National Folk Ballet Tanec was performed on January 27, 1956. Ensemble Tanec was the first dance company from Yugoslavia to perform in America. The company performed folk dances from Macedonia, Serbia, Croatia and Albania. [37]

The 2015–2016 season celebrated the hall's 125th anniversary and the launch of an unprecedented commissioning project of at least 125 new works with 'Fifty for the Future" coming from Kronos (25 by female composers and 25 by male composers).

Since July 2005, the Executive and Artistic Director of Carnegie Hall is Sir Clive Gillinson, formerly managing director of the London Symphony Orchestra.

The hall's operating budget for the 2008–2009 season was $84 million. For 2007–2008, operating costs exceeded revenues from operations by $40.2 million. With funding from donors, investment income and government grants, the hall ended that season with $1.9 million more in total revenues than total costs.

Rumor is that a pedestrian on Fifty-seventh Street, Manhattan, stopped Jascha Heifetz and inquired, "Could you tell me how to get to Carnegie Hall?" "Yes," said Heifetz. "Practice!" [40]

This old joke has become part of the folklore of the hall, but its origins remain a mystery. According to The New York Times, the main player in the story has been described at various times as either an unnamed man, violinist Jascha Heifetz or the pianist Arthur Rubinstein. [41] On its webpage, Carnegie Hall quotes the wife of violinist Mischa Elman as having perhaps the best story of its origin: "One day, after a rehearsal that hadn’t pleased Elman, the couple was leaving Carnegie Hall by the backstage entrance when they were approached by two tourists looking for the hall’s entrance. Seeing his violin case, they asked, 'How do you get to Carnegie Hall?' Without looking up and continuing on his way, Elman simply replied, 'Practice.'" [42]