The New York City Police Department (NYPD), officially the City of New York Police Department, is the primary law enforcement agency within the City of New York. Established on May 23, 1845, the NYPD is one of the oldest police departments in the United States, and is the largest police force in the United States. [7] The NYPD headquarters is at 1 Police Plaza, located on Park Row in Lower Manhattan near City Hall. The NYPD's regulations are compiled in title 38 of the New York City Rules. The NYC Transit Police and NYC Housing Authority Police Department were fully integrated into the NYPD in 1995. [8] The NYPD services include the Emergency Service Unit, K9, harbor patrol, air support, bomb squad, counter-terrorism, criminal intelligence, anti- organized crime, narcotics, public transportation, and public housing.

The NYPD employs around 55,000 people, including 36,000 uniformed officers. [9] According to the official CompStat database, the NYPD responded to nearly 500,000 reports of crime and made over 200,000 arrests during 2019. [10] [11] Public support for the NYPD is generally favorable, [12] [13] although critics highlight instances of police brutality and corruption, as well as discrimination on the basis of race, religion and sexuality. [14] [15] [16] Due to its high-profile location in the largest city and media center in the United States, fictionalized versions of the NYPD and its officers have frequently been portrayed in novels, radio, television, motion pictures, and video games.

The Municipal Police were established in 1845, replacing an old night watch system. Mayor William Havemeyer shepherded the NYPD together. [17] In 1857, it was replaced by a metropolitan force. The New York City Transit Police and the New York City Housing Authority Police Department were merged into the NYPD in 1995.

In 1994 the NYPD developed the CompStat computer system for tracking crime geographically. This award-winning system has been given credit for playing a role in the reduction of crime in New York City, [20] and has since been implemented by a number of other Police Departments in the US and overseas. [21]

As of July 2020, the NYPD's current authorized uniformed strength is 35,783. [22] There are also 19,454 civilian employees, including approximately 4,500 auxiliary police officers, 5,500 school safety agents and 3,500 traffic enforcement agents currently employed by the department. The Police Benevolent Association of the City of New York (NYC PBA), the largest municipal police union in the United States, represents over 50,000 active and retired NYC police officers.

Officers graduate from the Police Academy after five and a half to six months (or sometimes more) of training in various academic, physical, and tactical fields. For the first 18 months of their careers, they are designated as "Probationary Police Officers", or more informally, "rookies".

There are three career "tracks" in the NYPD: supervisory, investigative, and specialist. The supervisory track consists of nine ranks; promotion to the ranks of sergeant, lieutenant, and captain are made via competitive civil service examinations. After reaching the rank of captain, promotion to the ranks of deputy inspector, inspector, deputy chief, assistant chief, (bureau) chief and chief of department is at the discretion of the police commissioner. Promotion from the rank of police officer to detective is discretionary by the police commissioner or required by law when the officer has performed eighteen months or more of investigative duty.

Badges in the New York City Police Department are referred to as "shields" (the traditional term), though not all badge designs are strictly shield-shaped. Some officers have used "Pottsy" badges, "dupes," or duplicate badges, as officers are punished for losing their shield by also losing up to ten days' pay. [26]

^ †: Uniform rank that has no police powers

Officers from the Emergency Service Unit 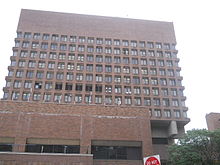 The Department is administered and governed by the Police Commissioner, who is appointed by the mayor. Technically, the Commissioner serves a five-year term; as a practical matter, they serve at the mayor's pleasure. The commissioner in turn appoints numerous deputy commissioners. By default, the commissioner and their subordinate deputies are civilians under an oath of office and are not sworn officers. However, a commissioner who comes up from the sworn ranks retains the status and statutory powers of a police officer while serving as commissioner. This affects their police pensions, and their ability to carry a firearm without a pistol permit. Some police commissioners carry a personal firearm, but they also have a full-time security detail.

Commissioners and Deputy Commissioners are administrators who supersede the chief of department, and they usually specialize in areas of great importance to the Department, such as counterterrorism, support services, public information, legal matters, intelligence, and information technology. However, as civilian administrators, deputy commissioners are prohibited from taking operational control of a police situation (the Commissioner and the first deputy commissioner may take control of these situations, however). Within the rank structure, there are also designations, known as "grades", that connote differences in duties, experience, and pay. However, supervisory functions are generally reserved for the rank of sergeant and above.

Office of the Chief of Department

The Chief of Department serves as the senior sworn member of the NYPD. Terence Monahan is the 40th individual to hold the post [27], which prior to 1987 was known as the chief of operations and before that as chief inspector. [28]

The Department is divided into twenty bureaus, [29] which are typically commanded by a uniformed bureau chief (such as the chief of patrol and the chief of housing) or a civilian deputy commissioner (such as the Deputy Commissioner of Information Technology). The bureaus fit under four umbrellas: Patrol, Transit & Housing, Investigative, and Administrative. Bureaus are often subdivided into smaller divisions and units.

In the 1990s the department developed a CompStat system of management which has also since been established in other cities. The NYPD has extensive crime scene investigation and laboratory resources, as well as units which assist with computer crime investigations. In 2005, the NYPD established a "Real Time Crime Center" to assist in investigations; [32] this is essentially a searchable database the pulls information from departmental records, including traffic tickets, court summonses, and previous complaints to reports, [33] as well as arrest reports. [32] The database contains databases to identify individuals based on tattoos, body marks, teeth, and skin conditions, based on police records. [32]

NYPD also maintains the Domain Awareness System, a network that provides information and analytics to police, drawn from a variety of sources, including a network of 9,000 publicly and privately owned surveillance cameras, license plate readers, ShotSpotter data, NYPD databases and radiation and chemical sensors. [34] The Domain Awareness System of surveillance was developed as part of Lower Manhattan Security Initiative in a partnership between the NYPD and Microsoft. [35] It allows the NYPD to track surveillance targets and gain detailed information about them. It also has access to data from at least 2 billion license plate readings, 100 million summonses, 54 million 911 calls, 15 million complaints, 12 million detective reports, 11 million arrests and 2 million warrants. The data from the 9,000 CCTV cameras is kept for 30 days. Text records are searchable. The system is connected to 9,000 video cameras around New York City. [36]

The NYPD has an extensive history of police brutality, misconduct, and corruption, as well as discrimination on the basis of race, religion and sexuality. [37] [38] [39] [40] [41] [42] Critics, including from within the NYPD, have accused the NYPD of rampantly manipulating crime statistics. [43] [44] In 2009, NYPD officer Adrian Schoolcraft was abducted by his fellow officers and involuntarily admitted to a psychiatric hospital after he provided evidence of manipulation of crime statistics (intentional underreporting of crimes) and intentional wrongful arrests (to meet arrest quotas). [45] [46]

The Civilian Complaint Review Board is an all-civilian, 13-member panel tasked with investigating misconduct or lesser abuse accusations against NYPD officers, including use of excessive force, abuse of authority, discourtesy and offensive language. Complaints against officers may be filed online, by mail, by phone or in person at any NYPD station. [47] On June 8, 2020, both houses of the New York state assembly passed the Eric Garner Anti-Chokehold Act, which makes it so any police officer in the state of New York who injures or kills somebody through the use of "a chokehold or similar restraint" can be charged with a class C felony, punishable by up to 15 years in prison. [48] New York Governor Andrew Cuomo signed the police reforms, which he described as "long overdue", into law on June 12, 2020. [49] [48]

During the 2020 coronavirus pandemic, many NYPD officers refused to wear face masks (contrary to the recommendations of health experts and authorities). [50] During the George Floyd protests, The New York Times reported that there were more than 60 videos showing NYPD police attacking protestors, many of whom were attacked without cause. [51]

The NYPD is affiliated with the New York City Police Foundation and the New York City Police Museum. It also runs a Youth Police academy to provide positive interaction with police officers and to educate young people about the challenges and responsibility of police work. The department also provides a citizen Police Academy which educates the public on basic law and policing procedures.

According to the Officer Down Memorial Page, the NYPD has lost 930 officers in the line of duty since 1849. This figure includes officers from agencies that were later absorbed by or became a part of the modern NYPD in addition to the NYPD itself. This number also includes officers killed on and off duty by gunfire of other officers on duty. The NYPD lost 23 officers in the September 11, 2001 attacks, not including another 136 who died of illnesses related to the attacks. [52] 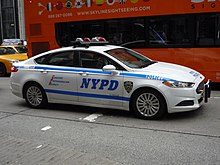 A modified paint scheme, with dark blue (or black, for some Auxiliary units) body and white stripes on the sides was used for some divisions. The text was also white. This was phased out in favor of a modified version of the regular scheme, with the word(s) "AUXILIARY", "SCHOOL SAFETY" or "TRAFFIC" on the rear quarter panels and trunk.

The Smith & Wesson 5946 was issued to new recruits in the past; [55] however, the pistol has been discontinued. [56] While it is no longer an option for new hires, officers who were issued the weapon may continue to use it.

Shotgun-certified officers were authorized to carry Ithaca 37 shotguns, which are being phased out in favor of the newer Mossberg 590. Officers and detectives belonging to the NYPD's Emergency Service Unit, Counter-terrorism Bureau and Strategic Response Group are armed with a range of select-fire weapons and long guns, such as the Colt M4A1 carbine and similar-pattern Colt AR-15 rifles, Heckler & Koch MP5 submachine gun, and the Remington Model 700 bolt-action rifle. [57]

From 1926 until 1986 the standard weapons of the department were the Smith & Wesson Model 10 and the Colt Official Police .38 Special revolvers with four-inch barrels. Female officers had the option to choose to carry a three-inch barrel revolver instead of the normal four inch model due to its lighter weight. Prior to 1994 the standard weapon of the NYPD was the Smith & Wesson Model 64 DAO (Double Action Only) .38 Special revolver with a three or four inch barrel. This type of revolver was called the Model NY-1 by the department. After the switch in 1994 to semiautomatic pistols, officers who privately purchased revolvers before January 1, 1994, were allowed to use them for duty use until August 31, 2018. They were grandfathered in as approved off-duty guns. [54]

Prior to the issuing of the 9mm semi-automatic pistol NYPD detectives and plainclothes officers often carried the Colt Detective Special and/or the Smith & Wesson Model 36 "Chief's Special" .38 Special caliber snub-nosed (2-inch) barrel revolvers for their ease of concealment while dressed in civilian clothes.

The Kahr K9 9 mm pistol was an approved off-duty/backup weapon from 1998 to 2011. It was pulled from service because it could not be modified to a 12-pound trigger pull.