Grindhouse movie theaters on 42nd Street in 1985 before its renovation; the 200 block of W. 42nd Street; former Lyric Theatre facade and nearby buildings

Grand Central Terminal at night, as seen from the west on 42nd Street 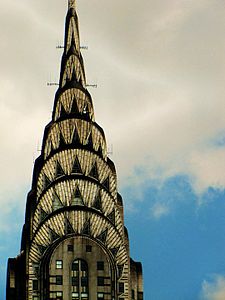 Chrysler Building, with its unique stainless-steel top, is located at Lexington Avenue and 42nd Street 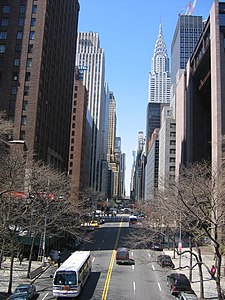 East end of 42nd Street is very different in tone from the west; looking west from bridge at 1st Avenue. The Ford Foundation Building is visible in the right foreground. 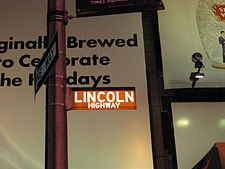 Sign marking the eastern terminus of the Lincoln Highway, which begins on 42nd Street and continues to San Francisco, California

42nd Street is a major crosstown street in the New York City borough of Manhattan, running primarily in Midtown Manhattan and Hell's Kitchen. The street is the site of some of New York's best known buildings, including (east to west) the headquarters of the United Nations, Chrysler Building, Grand Central Terminal, New York Public Library Main Branch, Times Square, and the Port Authority Bus Terminal.

The street is known for its theaters, especially near the intersection with Broadway at Times Square, and as such is also the name of the region of the theater district (and, at times, the red-light district) near that intersection.

During the American Revolutionary War, a cornfield near 42nd Street and Fifth Avenue was where General George Washington angrily attempted to rally his troops after the British landing at Kip's Bay, which scattered many of the American militiamen. Washington's attempt put him in danger of being captured, and his officers had to persuade him to leave. The rout eventually subsided into an orderly retreat. [2]

The street was designated by the Commissioners' Plan of 1811 that established the Manhattan street grid as one of 15 east-west streets that would be 100 feet (30 m) in width (while other streets were designated as 60 feet (18 m) in width). [4]

In 1835, the city's Street Committee, after receiving numerous complaints about lack of access for development above 14th Street, decided to open up all lots which had already been plotted on the city grid up to 42nd Street, which thus became – for a time – the northern boundary of the city. [5]

Cornelius Vanderbilt began the construction of Grand Central Depot in 1869 on 42nd Street at Fourth Avenue as the terminal for his Central, Hudson, Harlem and New Haven commuter rail lines, because city regulations required that trains be pulled by horse below 42nd Street. [6] The Depot, which opened in 1871, was replaced by Grand Central Terminal in 1913. [7]

Between the 1870s and 1890s, 42nd Street became the uptown boundary of the mainstream theatre district, which started around 23rd Street, as the entertainment district of the Tenderloin gradually moved northward. [8]

42nd Street was developed relatively late compared to other crosstown thoroughfares such as 14th Street and 23rd Street, which had grown during the American Civil War, and 57th Street, which became prominent in the 1890s. It was only after the beginning of the 20th century that the street saw entertainment venues being developed around Times Square and upscale office space around Grand Central Terminal. [9] The corner of 42nd Street and Broadway, at the southeast corner of Times Square, was the eastern terminus of the Lincoln Highway, the first road across the United States, which was conceived and mapped in 1913.

An elevated railroad line, running above East 42nd Street from Third Avenue to the Grand Central station, was closed in 1923, [10] leading to the development of such structures as the Chanin Building and 110 East 42nd Street west of Lexington Avenue. The street east of Lexington Avenue continued to be made up of mostly low-rise buildings; these blocks were adjacent to the Second Avenue and Third Avenue elevated lines, and accordingly, initially considered unattractive for major development. [11] By the 1920s, The New York Times reported that several high-rise developments were "radically changing the old-time conditions" along East 42nd Street, [12] including the Chanin, Lincoln, Chrysler, and Daily News Buildings, as well as Tudor City. [13]

West 42nd Street, meanwhile, prospered as a theater and entertainment district until World War II. According to historian Robert A. M. Stern, West 42nd Street's decline started in 1946, when the streetcars on 42nd Street were replaced by less efficient buses. [9]

Lloyd Bacon and Busby Berkeley's 1933 film musical 42nd Street, starring 30s heartthrobs Dick Powell and Ruby Keeler, displays the bawdy and colorful mixture of Broadway denizens and lowlifes in Manhattan during the Depression. In 1980, it was turned into a successful Broadway musical which ran until 1989, and which was revived for a four-year run in 2001. [14] In the words of the Al Dubin and Harry Warren title song, on 42nd Street one could find:

Little nifties from the Fifties, innocent and sweet,

Sexy ladies from the Eighties who are indiscreet,

They're side by side, they're glorified,

Where the underworld can meet the elite

From the late 1950s until the late 1980s, 42nd Street, nicknamed the "Deuce", was the cultural center of American grindhouse theaters, which spawned an entire subculture. The book Sleazoid Express, a travelogue of the 42nd Street grindhouses and the films they showed, describes the unique blend of people who made up the theater-goers:

While the street outside the theatres was populated with:

For much of the mid and late 20th century, the area of 42nd Street near Times Square was home to activities often considered unsavory, [16] including peep shows.

East 42nd Street was, for some time, spared from similar decline, especially east of Third Avenue, where the development of the United Nations supported a thriving business district and prompted the widening of that section of 42nd Street. [9] [17] The demolition of the Second and Third Avenue elevated lines by the 1950s led to increased development on East 42nd Street, such as annexes to the Chrysler and Daily News Buildings, as well as the construction of the Socony–Mobil and Ford Foundation Buildings. [18] By the 1960s, East 42nd Street between Park and Second Avenues contained more headquarters of industries than any other place in the United States except Chicago or Pittsburgh. [19] [20] During this time, there was much development outside the rundown entertainment district of Times Square, somewhat offsetting the perception of that part of 42nd Street. [21]

In the early 1990s, city government encouraged a cleanup of the Times Square area. In 1990, the city government took over six of the historic theatres on the block of 42nd Street between Seventh and Eighth Avenues, and New 42nd Street, a not-for-profit organization, was formed to oversee their renovation and reuse, as well as to construct new theatres and a rehearsal space. In 1993, Disney Theatrical Productions bought the New Amsterdam Theatre, which it renovated a few years later. Since the mid-1990s, the block has again become home to mainstream theatres and several multi-screen mainstream movie theatres, along with shops, restaurants, hotels, and attractions such as Madame Tussauds wax museum and Ripley's Believe It or Not that draw millions to the city every year. This area is now co-signed as "New 42nd Street" to signify this change.

In the 1990s, the renovation of Bryant Park between Fifth and Sixth Avenues, as well as the renovations of Times Square and Grand Central Terminal, led to increases in office occupancy along both sections of 42nd Street. [22]

(from East to West):

Every New York City Subway line that crosses 42nd Street has a stop on 42nd Street: [24]

There are two subway lines under 42nd Street. The 42nd Street Shuttle ( S train) runs under 42nd Street between Broadway/Seventh Avenue ( Times Square) and Park Avenue ( Grand Central). The IRT Flushing Line ( 7 and <7>​ trains) curves from Eleventh Avenue to 41st Street, under which it runs until Fifth Avenue; shifts to 42nd Street between Fifth and Madison Avenues; and continues under the East River to Queens. Each line stops at Times Square and Grand Central, though the Fifth Avenue station is also served by the 7 and <7>​ trains. [24]

In the past, every former IRT elevated line had a station at 42nd Street:

MTA Regional Bus Operations's M42 bus runs the length of 42nd Street between the Circle Line Sightseeing Cruises ferry terminal on the Hudson River and the headquarters of the United Nations on the East River. [25] Its predecessor, the 42nd Street Crosstown Line streetcar, had used 42nd Street.[ citation needed] In 2019, bus lanes were installed along the length of the street. [26]