From Wikipedia, the free encyclopedia
Neighborhood of Manhattan in New York City

Koreatown ( Korean: 맨해튼 코리아타운), or K-Town, is an ethnic Korean enclave in Midtown Manhattan, New York City, centered on 32nd Street between Madison Avenue and the intersection with Sixth Avenue and Broadway, which is known as Greeley Square. The neighborhood in Midtown South features over 150 businesses of various types and sizes, ranging from small restaurants and beauty salons to large branches of Korean banking conglomerates. Koreatown, Manhattan has become described as the "Korean Times Square" and has emerged as the international economic outpost for the Korean chaebol. [1]

Historically, Manhattan's Koreatown has been part of the Garment District. In the 1980s, a Korean bookstore and a handful of restaurants were founded in the area. Their success drew other Korean-owned businesses, sustained by increased immigration from Korea and tourist traffic from nearby Midtown Manhattan landmarks like the Empire State Building, Macy's Herald Square, the United Nations Headquarters, Penn Station, Madison Square Garden, the Garment District, and the Flower District. [2] Today, Koreatown is primarily a Korean business district, but the resident Korean population in the area has grown as well.

From 2000 to 2010, the Korean population of Manhattan (co-extensive with New York County) nearly doubled, to about 20,000, according to the 2010 United States Census. [3] Along with the Koreatowns in nearby Bergen County, New Jersey (in Palisades Park and Fort Lee) and Long Island (extending eastward from Flushing, Queens) in New York City, Manhattan's Koreatown serves as the cultural nexus for an overall Korean American population of 218,764 people in the New York City Metropolitan Area, [4] the second-largest population of ethnic Koreans outside of Korea. [5] 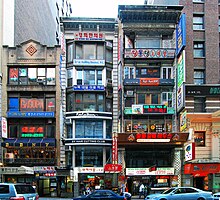 The heart of Koreatown is the segment of West 32nd Street between Fifth Avenue and Sixth Avenue, officially nicknamed Korea Way. Korea Way features stores and restaurants on multiple stories, with independently run establishments reaching up to higher floors, exuding an ambience of Seoul itself. [6] [2] [7] The New York City Korean Chamber of Commerce estimates there to be more than 100 small businesses on Korea Way. [8] Signage in Hangul (한글) is ubiquitous. Koreatown's central location and high density of crowded restaurants, bars, karaoke clubs, and spas on Korea Way have rendered it a major tourist attraction and a center of nightlife in Manhattan. [6]

Development as a Korean dining destination

Some 24/7 restaurants conduct business on Korea Way. [16] [17] Korean restaurants in the district have had to expand or stay open around the clock to meet rising commercial rents and stay financially viable, given the growing prestige and high customer volume generated by foot traffic in Koreatown, Manhattan, and greater investment and involvement by the Korean chaebol. [1] [13] Manhattan's Koreatown, historically known as a more tourist-oriented alternative to Flushing and Murray Hill, Queens (part of the Long Island Koreatown), has since developed a reputation as an authentic Korean dining destination. [13]

Other Koreatowns in the New York City region: