Downers Grove is a village in DuPage County, Illinois, United States. It was founded in 1832 by Pierce Downer, whose surname serves as the eponym for the village. Per the 2020 census, the population of the village was 49,654. It is a south-west suburb of Chicago. The village is located between I-88 and I-55.

Downers Grove was founded in 1832 by Pierce Downer, [5] a farmer who traveled to Illinois from Rutland, New York, but was originally from Vermont. [6] Its other early settlers included the Blodgett, Curtiss, Blanchard, Stanley, Lyman, and Carpenter families. The original settlers were mostly migrants from the Northeastern United States and Northern Europe. The first schoolhouse was built in 1844. In 1846, the Blodgett house was built by Israel and Avis Blodgett. It was the second (or third) home built in Downers Grove, and is of cultural significance as a former stop on the Underground Railroad. The cabin still stands, alongside Pierce Downer's original home on Maple Avenue, and is maintained by the Downers Grove Historical Society [7]

The Chicago, Burlington and Quincy Railroad was extended from Aurora to Chicago through Downers Grove in 1864, boosting its population. The town was incorporated in March 1873. Its somewhat unusual spelling ("Apostrophe-free since 1873") remains a minor historical mystery.

In April 1947, the wreck of a Burlington Railroad Twin Cities Zephyr passenger train killed three people, including the engineer. The streamliner struck a large tractor which had fallen from a freight train and two passenger cars crashed through a wall of the Main Street Station.

The construction of two major toll roads along the village's northern and western boundaries, I-355 in 1989, and what is now referred to as I-88 in 1958, facilitated the village's access to the rest of Chicago metropolitan area. I-55 is not far from the south edge of the village. Downers Grove has developed into a bustling Chicago suburb with many diverse businesses, including the headquarters for Devry University, FTD, Ambitech Engineering Corp, Dover, Heartland Food Corporation, and HAVI Global Solutions.

The housing stock in Downers Grove comprises a mixture; some, generally near the center of town, date from the middle of the 19th century, but housing styles of each succeeding generation are represented. Downers Grove has witnessed one of the highest teardown rates in the Chicago area; small older residences are being demolished and replaced with much larger new houses. [8] Teardowns have been the source of much controversy within the village. Since they occupy much more land than the original houses, rainwater that was originally absorbed by their yards is directed into neighboring yards and streets, resulting in flooding. [9] Concerns have been expressed that teardowns reduce affordable housing in the town and promote gentrification. [10] 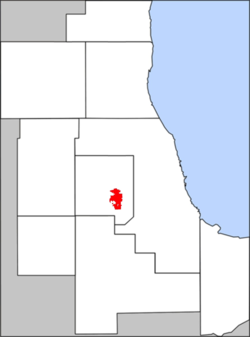 Map of the village's boundaries within DuPage County

Downers Grove is in a humid continental climate zone. On average, January is the coldest month, while July is the warmest month. August typically has the most precipitation, and February the least. The record high for Downers Grove was 105 °F (41 °C) in July 2005, and the record low of −26 °F (−32 °C) was set in January 1985. [15]

Downers Grove's retail economy is largely supported by the local section of Ogden Avenue. The stretch of Ogden Avenue through Chicago's western suburbs is particularly known for its automobile dealerships, classic car dealerships, and service centers. Ogden Avenue is also framed by a variety of grocery and convenience stores such as CVS, Fresh Thyme Farmers Market, Jewel, Trader Joe's, and Walgreens. Industrial and corporate parks may be found on Ogden's tributaries adjacent to major tollways such as I-355 or I-88. [22] [23]

According to the Village's 2017 Comprehensive Annual Financial Report, [24] the top employers in the city are:

About 25 Sears-Roebuck Catalog Homes are located in Downers Grove, built using purchased kits between 1908 and 1940. [25] The Blodgett House (1846) was a stopover point on the Underground Railroad. [26] The house has been moved to the Downers Grove Museum Campus. [27]

The Tivoli Theatre and over 140 community events and festivals, attract thousands of visitors each year. Over 600 acres (2.4 km2) of parks for recreational use are available with 450 recreational activities are available throughout the year. On Friday nights throughout the summer, antique and specialty cars park downtown in an informal car show. The Indian Boundary YMCA sponsors an ice sculpture festival held in January.[ citation needed]

Downers Grove contains a multitude of parks and forest preserves, including: [28]

The Village of Downers Grove operates under a magisterial council-manager form of government. The Village Council is the policy-making body that authorizes a professional manager to oversee the daily operations of the village. The Village Council is composed of the Mayor and six Commissioners elected at-large. In addition to the Municipal Code, which establishes many of the rules and regulations by which the Village operates, the Council has also adopted separate council policies on several matters related to municipal activities.

The elections for Mayor and Commissioners are non-partisan; the candidates' party affiliations do not appear on the ballot, and direct party funding is not traditionally practiced.

In 2006, the July 4 parade in Downers Grove featured both of the major Illinois gubernatorial candidates at the time, Judy Baar Topinka (R) and Rod Blagojevich (D). [30]

Downers Grove is home to the Avery Coonley School. [34] Founded in 1906 and in its present location in Downers Grove since 1929, it is a private K-8 school, known for its math and science-oriented teaching as well as its focus on the arts and foreign language.

According to the American Community Survey 2010, Downers Grove has one of the nation's most educated citizenry, with 50.7% of individuals over the age of 25 holding bachelor's or advanced degrees; the national average is 27.9%. [35]

The main line of the BNSF Railway Line, the line is also used by Metra commuter rail. Metra's BNSF Railway Line has three stops in Downers Grove at Belmont Road, Main Street, and Fairview Avenue. Interstate Highways 355 and 88 pass through the community, as well as the major surface street US 34- Ogden Avenue. Downers Grove is served by the Pace Bus Service, a system of suburban public transportation.

The Grove Commuter Shuttle runs four routes throughout the community to two of the three train station that are in the village. [36] The shuttle also operates for the RotaryGrove Fest from remote parking lots on the north and south sides of the village located at the respective north and south high schools.

Downers Grove drinking water comes from Lake Michigan, via the DuPage Water Commission pipeline, which purchases the water from the City of Chicago Department of Water Management. [37] Its electricity infrastructure is largely maintained by Commonwealth Edison Company (ComEd); [38] its natural gas infrastructure was built by Northern Illinois Gas. [39]

Household waste pickup is contracted out by the village to Republic Services, as is yard waste pickup; these are paid for by either household-purchased stickers or rented carts. Curbside recycling is free.

Waste water is treated by the Downers Grove Sanitary District. [40]