From Wikipedia, the free encyclopedia
For the military conflict, see Battle of Tupelo.

Tupelo National Battlefield commemorates the American Civil War battle of Tupelo, also known as the Battle of Harrisburg, fought from July 14 to 15, 1864, near Tupelo, Mississippi. The Union victory over Confederate forces in northeast Mississippi ensured the safety of Sherman's supply lines during the Atlanta Campaign. [1] 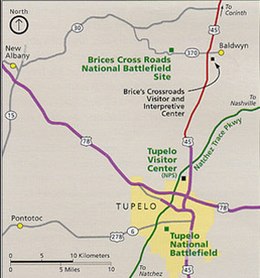 The Tupelo National Battlefield was established as "Tupelo Battlefield Site" on February 21, 1929. The site was transferred from the United States War Department to the National Park Service on August 10, 1933, redesignated, and boundary changed on August 10, 1961. In 1936, the Tupelo-Gainesville Tornado destroyed the concrete monument to the battle, ripping it out of the ground and shattering it. [2] The site was listed in the National Register of Historic Places on October 15, 1966.