Vicksburg National Military Park preserves the site of the American Civil War Battle of Vicksburg, waged from March 29 to July 4, 1863. The park, located in Vicksburg, Mississippi (flanking the Mississippi River), also commemorates the greater Vicksburg Campaign which led up to the battle. Reconstructed forts and trenches evoke memories of the 47-day siege that ended in the surrender of the city. Victory here and at Port Hudson, farther south in Louisiana, gave the Union control of the Mississippi River. 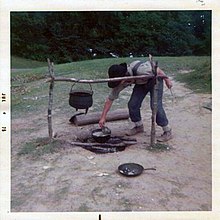 The Cairo, also known as the "Hardluck Ironclad," was the first U.S. ship in history to be sunk by a torpedo/mine. It was recovered from the Yazoo in 1964.

The Illinois State Memorial has 47 steps, one for every day Vicksburg was besieged.

The time period for Civil War interments was 1866 to 1874. The cemetery is not open to new interments. The cemetery [1] has only one airman of Royal Australian Air Force buried during World War II. [2]

The remnants of Grant's Canal, a detached section of the military park, are located across from Vicksburg near Delta, Louisiana. Union Army Major General Ulysses S. Grant ordered the project, started on June 27, 1862, as part of his Vicksburg Campaign, with two goals in mind. The first was to alter the course of the Mississippi River in order to bypass the Confederate guns at Vicksburg. For various technical reasons the project failed to meet this goal. The river did change course by itself on April 26, 1876. The project met its second goal, keeping troops occupied during the laborious maneuvering required to begin the Battle of Vicksburg.

In the late 1950s, a portion of the park was transferred to the city as a local park in exchange for closing local roads running through the remainder of the park. It also allowed for the construction of Interstate 20. The monuments in land transferred to the city are still maintained by the NPS. As with all historic areas administered by the NPS, the park was listed on the National Register of Historic Places on October 15, 1966. Over half a million visitors visit the park every year. [3]