San Pedro Bay in a 1900 plan for the Los Angeles Harbor, present cities and districts are named

Aerial view of the Port of Long Beach.

The Hanjin terminal at The Port of Long Beach.

The San Pedro Breakwater was started in 1899 and over time was expanded to protect the current site of the Port of Long Beach. The Port of Long Beach was founded on 800 acres (3.2 km2) of mudflats on June 24, 1911, at the mouth of the Los Angeles River. In 1917, the first Board of Harbor Commissioners was formed to supervise harbor operations. Due to the booming economy, Long Beach voters approved a $5 million bond to improve the inner and outer harbor in 1924. [5]

By 1926 more than one million tons of cargo were handled, and additional piers were constructed to accommodate the growing business. [7]

In 1921, oil was discovered at the Long Beach Oil Field on and around Signal Hill. In 1932, the fourth-largest oil field in the United States, Wilmington Oil Field, was discovered; much of this field was underneath Long Beach and the harbor area itself. [8] The hundreds of oil wells from Wilmington Oil Field provided oil revenues to the City and Port of Long Beach. The first offshore oil well in the harbor was brought online in 1937, shortly after the discovery that the oil field far extended into the harbor. In the mid-1930s, the port was expanded, largely due to the need to transport oil to foreign markets, as the immense output of oil from the Los Angeles Basin caused a glut in US markets. [9]

The extraction of hundreds of millions of barrels of oil caused concern for subsidence, as the overlying land collapsed into the empty space over time. [10] Engineers and geologists were promptly assigned to the problem, building dikes for flood control at high tide.

On July 3, 1930 the Federal River and Harbor Act authorizes expanding the San Pedro Bay breakwater by 3.5-mile completed in 1949.

Long Beach became a home port for the United States Navy's Pacific Fleet in 1932. In 1940 the navy purchased 105 acres on Terminal Island built the Long Beach Naval Shipyard there.

In 1946, after World War II, the Port of Long Beach was established as "America’s most modern port" with the completion of the first of nine clear-span transit sheds. [11] Pier E was completed and Pier B was expanded to two times its size in 1949. Pierpoint Landing completed on Pier F in 1948, becoming a large sport fishing spot.

Concerns regarding subsidence increased until Operation "Big Squirt," a water injection program, halted any progression of sinking land in 1960. [12]

Port of Long Beach, Container terminal, with the Vincent Thomas Bridge in the background

With the rapid expansion of the port pollution also increased. The Port of Long Beach instituted programs to prevent and control oil spills, contain debris, and manage vessel traffic. Due to its efforts, the port was awarded the American Association of Port Authorities Environmental "E" Award. Long Beach is the first harbor in the Western Hemisphere to receive such an award. [14]

In 1980, with improved relations between the United States and China, the port sent officials to the People’s Republic of China for the first time. Less than a year later, the China Ocean Shipping Co. inaugurated international shipping and designated Long Beach as its first US port of call. Relationships were forged with other international powers, and South Korea's Hanjin Shipping opened a 57-acre (230,000 m2) container terminal on Pier C of the port in 1991. [15] Following this, COSCO, a Chinese international shipping carrier, secured business with the Port of Long Beach in 1997.

The surge in vessel traffic and cargo prompted increased environmental efforts by the port. In 2004, the Port of Long Beach reached compliance with an air pollution mandate by handling petroleum coke, one of the port's largest exports, in improved ways. By using enclosed conveyors and covered storage areas, the port reduced the amount of dust emitted by the petroleum coke by 5%, down 21% in 1997. [18]

In 2007, the seaport launched banned older diesel trucks from serving the port. [19] [20] On October 1, 2011, the Clean Trucks Program was launched by the Ports of Long Beach and Los Angeles. The program set a goal to reduce air pollution from its truck fleet by 80% by 2012. Trucks built prior to 1987 that fail to meet the 2007 clean truck standards set forth by the United States Environmental Protection Agency are denied access to port terminals. In compliance with the clean truck initiative on October 1, all trucking companies conducting business with the port must have a port-approved concession outlining the regulations they must abide by. By September 23, 2011, nearly 500 trucking companies had applied for concessions, amounting to more than 6,000 trucks. [21]

A south looking view of the Port of Long Beach with Santa Catalina Island in the background.

In 2012 International Longshore and Warehouse Union went on strike, that closed down the ports of and Long Beach and Los Angeles. The eight-day strike cost California about $8 billion. Ships were backed up into the pacific ocean. The Federal Mediation and Conciliation Service helped end the strike. The strike impacted retailers getting ready for the holiday sales. [22] [23]

In April 2019, Orient Overseas (International) Ltd. announced that it would sell the Long Beach Container Terminal business to a consortium led by Macquarie Infrastructure Partners for $1.78 billion. [24] The federal government demanded the sale of the terminal after a 2018 review by the Committee on Foreign Investment in the United States [25]

A decision in 2020 by the California Public Utilities Commission allowed building a fuel cell plant at the port to move ahead. The joint venture by Toyota and FuelCell Energy would produce power and hydrogen from natural gas. [26]

The port's combined import and export value is nearly $100 billion per year. [27] The seaport provides jobs, generates tax revenue, and supports retail and manufacturing businesses. More than $800 million a year is spent on wholesale distribution services in the city. In the City of Los Angeles, port operations generate more than 230,000 jobs, with more than $10 billion a year going to distribution services in the city. On the state level, the Port of Long Beach provides about 370,000 jobs and generates close to $5.6 billion a year in state and local tax revenues [28]

The twin ports of Los Angeles and Long Beach are, together, the single largest source of air pollution in the metropolitan Los Angeles area. Both ports have implemented a number of environmental programs to reduce pollution levels while continuing port growth. [29] 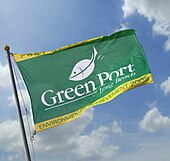 The Green Port Policy was adopted by the Port of Long Beach in 2005.

The internationally recognized Green Port Policy [30] was adopted by the Port of Long Beach in 2005 in an effort to reduce pollution in the growing region of Los Angeles/Long Beach. The policy sets a framework for enhancing wildlife habitat, improving air and water quality, cleaning soil and undersea sediments, and creating a sustainable port culture. The guiding principles of the Green Port Policy are to protect the community from the harmful environmental impacts of port operations, distinguish the port as a leader in environmental stewardship and compliance, promote sustainability, employ the best available technology to avoid or reduce environmental impacts, and engage and educate the community. Long Beach Harbor is recognized for protection by the California Bays and Estuaries Policy. [31]

The Clean Air Action Plan also included the use of trucks that were deemed excessively pollutant. The port's Harbor Commission approved a Clean Trucks Program that banned old diesel trucks by October 2008. The program, outlined in the San Pedro Bay Ports Clean Air Action Plan, was expected to modernize the port trucking industry and slash truck-related air pollution by 80% by 2012. Diesel-powered harbor short-haul (drayage) trucks are a major source of air pollution.

The Community Grants Program was created in 2016 to award grants to projects that improve air quality and energy efficiency at facilities used by the public. Established by the Long Beach Board of Harbor Commissioners, it is the largest voluntary effort of its kind in the nation. [32]

While clean trucks were a focus, the Port of Long Beach also turned its attention to ships. The Green Flag incentive program was set up to encourage ships to slow down in order to improve air quality. The Green Flag program provides approximately $2 million a year in discounts for vessel operators who slow their ships to 12 knots (22 km/h) or less within 20 miles (32 km) of the harbor. According to the port, the Green Flag program reduced air pollution by 600 tons in 2007 and was expected to do better in 2008.

The port has donated millions of dollars to select Southern California wetlands projects, including a $50 million donation to the Bolsa Chica Ecological Reserve in Huntington Beach. [33] Port of Long Beach officials looking into helping restore and revitalize the Los Cerritos Wetlands. [34]

To help improve relations with the Long Beach and surrounding towns, Port of Long Beach started a number of outreach events. 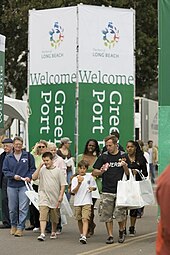 A new "green" Command and Control Center is being built.

In February 2009, the Port opened a $21 million command center. The Command and Control Center conforms to the port's Green Port Policy of being energy efficient. [40] 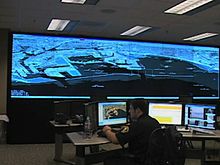 Security officer watches the port, detecting all ships within 11 miles of the facility.

The Long Beach Harbor Patrol is a group of trained and armed public officers dedicated to security and public safety at the Port of Long Beach. Harbor Patrol officers monitor port facilities and public roads, respond to dispatches, and have authority to access all marine terminals and cargo at the port.

Media related to Port of Long Beach at Wikimedia Commons