The Olympic Club is an athletic club and private social club in San Francisco, California.

Its main "City Clubhouse" is located in San Francisco's Union Square district, and its three golf courses are in the southwestern corner of the city, at the border with Daly City. The "Lakeside Clubhouse" is located just north of the Daly City border; the two clubhouses are separated by about 10 miles (16 km).

The three golf courses are named Lake, Ocean, and Cliffs. Lake and Ocean are 18-hole par-71 courses, and the Cliffs is a nine-hole par-3 course in the bluffs overlooking the Pacific Ocean. All three venues are lined with many trees (almost 40,000 on the Lake course) and offer views of the Golden Gate Bridge and Golden Gate Park. The United States Golf Association recognizes the Olympic Club as one of the first 100 golf clubs established in the United States. 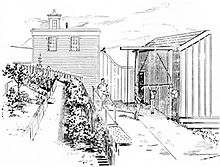 The Olympic Club, drawing by the Nahl Brothers, 1855

James J. Corbett, the heavyweight boxing champion from 1892 to 1897, joined the club in 1884. He later went on to coach boxing at the club for many years. On January 2, 1893 the club opened its first permanent clubhouse on Post Street. That building did not survive the San Francisco earthquake. 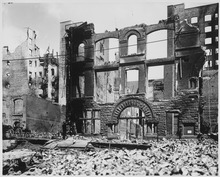 Ruins of the club, after the San Francisco Earthquake of 1906

In 1987, San Francisco City Attorney Louise Renne filed suit against the Olympic Club for discrimination against women and (allegedly) against minorities. Renne contended that the Club's lease of City-owned land upon which fell one hole of the Lake Course and two holes of the Ocean Course required them to conform to the City's anti-discrimination policies. [7] Rather than face a protracted legal case with an uncertain outcome, the board voted to accept women as members in 1990. [8] The allegation involving minorities was withdrawn.

In 1918, the club took over the Lakeside Golf Club, which had just opened in 1917 but was struggling financially. Lakeside had one 18-hole golf course designed by Wilfrid Reid, but following additional land purchases the club decided to replace it with two courses. These were designed by Willie Watson, a well-known Scottish architect, and the Lake and Ocean courses opened in 1924. The Ocean course was shortly thereafter damaged by landslides, and Sam Whiting (who had constructed the two courses, and would remain as superintendent until 1954) remodeled and rebuilt both courses in 1927. In 1953, the Lake course was modified by Robert Trent Jones in preparation for the 1955 U.S. Open. The Ocean course was altered several times over the years, and following heavy storm damage in 1996 was completely redesigned by Tom Weiskopf and reopened in 2000. [9]

The Cliffs Course opened in 1994 with Jay Morrish and Tom Weiskopf as the course architects.

The Olympic Club hosted the 2004 U.S. Junior Amateur (won by Sihwan Kim) and the U.S. Amateur in 1958 (won by Charles Coe) and 1981 (won by Nathaniel Crosby, son of Bing Crosby). The Lake and Ocean Courses were used for the 2007 U.S. Amateur, which was won by Colt Knost of Dallas, Texas, who earned a 2-and-1 victory over Michael Thompson of Tucson, Arizona. 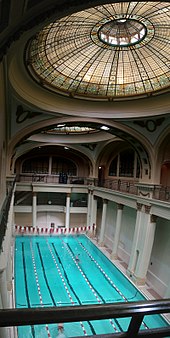 Cycling is one of the sports with the longest tradition at the Olympic Club. From 1893 to 1903, the Olympic Club Cycling Team was one of the club's premier teams. Although the sanctioned cycling team disbanded in 1903, many Olympians participated in cycling on an individual basis. The most illustrious of these was Ernest Ohrt. Ohrt capped his cycling career by being named coach of the United States Olympic Games cycling team in 1924.

In addition to being a springboard for aspiring professional cyclists, the modern cycling team also boasts some of the finest masters-age cyclists in the nation, including Brian McGuire, Hal Johnson, Cynthia Mommsen and Lisa Hunt.

In 1992, the Club set up the Winged "O" Foundation, which changed its name to The Olympic Club Foundation in 2002. Its purpose is to fund youth sports programs which primarily target less advantaged youth who live in the Bay Area.

The Olympic Club fielded a football team that played Bay Area colleges such as Stanford, Cal, St. Mary's, and Santa Clara. [10] The team was formed in 1890. [11] That year, the Olympic Club was accused by a rival club of enticing athletes to jump to its ranks with offers of jobs. An investigation by the Amateur Athletic Union ruled that the Olympics' practice was not actually professionalism but only a "semi" form of it, thus inventing the term " semi-pro". Although the Amateur Athletic Union didn't like the idea very much, it decided that clubs could indeed offer employment without losing their amateur status or compromising the athlete. [12] From 1891 through 1934, Olympic club had a 12-30-8 record against Stanford [13] and a 6-49-5 record against Cal. [14]

In 1926, Percy Locey played football at the Olympic Club. He was a member of the Olympic's "Winged-O" football eleven that handed the University of California's "Wonder Team" their first loss in five seasons. [15] In 1928, Locey took over as the head football coach at the Olympic Club. [15] In his first year with the Olympic Club, his team posted an undefeated season, with wins over future Pac-12 schools Stanford and 1929 Rose Bowl bound California. After the success of that season, Locey was promoted to head coach of all sports at the athletic club. He was named the coach of the West team in the annual East–West Shrine Game in 1929, though his team was defeated that year, 19-7.

In 1913, the Olympic Club's rugby union team played the touring the New Zealand All Blacks, then as now the world top team in that sport. Olympic Club members later provided the core of the U.S. national team that won gold medals in rugby at the 1920 and 1924 Summer Olympics,[ citation needed] the last occasion the sport was part of the Olympic program. 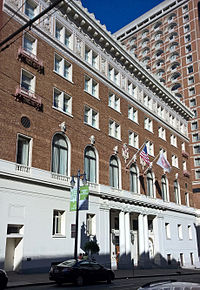 The Olympic Club's City Clubhouse is a masonry building on Post Street, two blocks west of Union Square in San Francisco, next door to the Bohemian Club and on the same block as the Marines Memorial Club. A garage (shared by the Marines Memorial Club) and separate entrance are on Sutter Street, on the north side of the block. The current clubhouse was built in 1912, after the first one was destroyed in the 1906 San Francisco earthquake. The clubhouse contains a pub, a dining room, meeting rooms, banquet rooms, guestrooms, a fitness center, a cardio solarium, handball and squash courts, circuit training facilities, two basketball courts, two swimming pools, and a rooftop deck.

The club was the setting of the 1966 episode "The Fight San Francisco Never Forgot" of the syndicated western television series, Death Valley Days. In the story line Walter Watson ( John McLiam) halts a local bully and trains James J. Corbett (James Davidson) as his promotional rival. [16]

Bent grass covers the greens. The fairways are a rye and poa annua grass combination. The roughs also have a bit of bluegrass mixed in.

Setup for the 2007 U.S. Amateur Championship:

18th hole at the Lake Course

The Lake Course was lengthened to prepare for the 2007 U.S. Amateur and 2012 U.S. Open by architect Bill Love. Included in the improvements by Bill Love were new tees that have added significant length to the 2nd, 3rd, 5th, 6th, 9th, 12th, 13th and 16th holes. In addition, drastic changes were made to the par-4 seventh and par-3 eighth holes as part of the greens replacement project. A new two-tiered green at the seventh replaces the old three-level green constructed in the 1970s. This green is located approximately 20 yards behind the old one. The most dramatic alterations were made at the par-3 8th. Previously just a short uphill pitch, a completely new hole has been built with a teeing area well back and to the right of the original, changing the angle of approach and pushing the length of the hole back to 200 yards. A new green has also been built at the par-3 15th. The controversial 18th green has also been changed further to reintroduce, in a more playable manner, the slope that was previously removed while at the same time creating more diversity in pin placements for the finishing hole. The new 7th and 8th holes opened for play in May 2009.

The Ocean Course has seen many changes over its history including a recent complete redesign and reconstruction in 2012 by architects Bill Love and Brian Kington. The Ocean Course's storied past includes winter El Niño storms in 1983, and 1997 that caused significant damage and required major changes to the course and layout. During the mid-1990s, the club built 4 holes west of Skyline Blvd. along the bluffs overlooking the Pacific Ocean. Holes of par 4, par 3, par 5, and par 4 had dramatic views, but these holes were severely eroded and fell victim to the 1997 storm. Prior to the recent 2012 renovation project the course had been rebuilt in 1999.

In preparation for the 2007 U.S. Amateur, the 14th hole was changed, to allow the 15th hole and driving range to be lengthened. The Ocean Course recently hosted the U.S.G.A. Amateur Four-ball Championships in May 2015.

The 9-hole, par 3 Cliffs Course is the windiest because it is set on the bluffs above the Pacific Ocean. Though it is short, it is very challenging. Designed by Jay Morrish and Tom Weiskopf, it is the most scenic of all three courses. It measures 1,800 yards.

The 54-hole leader has failed to win every time the Open has been played at The Olympic Club.

Jack Fleck won in 1955, defeating Ben Hogan in an 18-hole playoff after the two were tied at the end of 72 holes on 287. Billy Casper defeated Arnold Palmer in a playoff to win in 1966 and in 1987 Scott Simpson won by one shot from Tom Watson.

Lee Janzen won at Olympic in 1998 with a score of 280 (even par, as the course played a par 70 for the U.S. Open). Players complained about the pin position at the 18th hole in the second round. The pin was set at the top of a ridge, and, many balls rolled on way past the cup. Kirk Triplett incurred a two-stroke penalty when he used his putter to stop the ball from rolling. Payne Stewart, the runner-up to Janzen, complained as he three-putted the hole. The green was flattened around 2000 as a result, but was given more slope in the recent renovation to the course.

The 2012 U.S Open was won by Webb Simpson when he scored 4 birdies in the last 13 holes. This U.S. Open was part of three sports championships involving San Francisco that year, along with the Giants' World Series victory and the 49ers' sixth Super Bowl appearance.

The Olympic Club has hosted one U.S. Junior Amateur, in 2004.

In November 2017, it was announced by the PGA of America that The Olympic Club's Lake Course will be the host of the 2028 PGA Championship, as well as the 2032 Ryder Cup. It will be the first Ryder Cup held on the West coast since the 1959 contest in Indian Wells, California. It will also be the first for the Bay Area. [17]