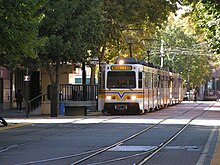 Sacramento's light rail system, with an average of 36,800 weekday daily boardings in Q3 2018, [2] is the sixteenth busiest in the United States.

Prior to 1980 efforts by community organizers led by the Modern Transit Society to bring light rail to Sacramento were stopped by the Regional Transit District Administration and Board of Directors.[ citation needed]

The light rail system opened in 1987. The new line linked the northeastern ( Interstate 80) and eastern ( Route 50) corridors with Downtown Sacramento. [5] More specifically, the "starter line" started at Watt/I-80 station to Butterfield station. [6] As light rail ridership increased, RT continued to expand the light rail system. In September 1998, the line was extended from Butterfield station to Mather Field/Mills station. In September 2003, Sacramento Regional Transit opened the first phase of the South Line(Now called the Blue Line), which was a 6.3-mile (10.1 km) extension to South Sacramento. In June 2004, light rail was extended from the Mather Field/Mills station to Sunrise Boulevard, and on October 15, 2005, a 7.4-mile (11.9 km) extension from the Sunrise station to the city of Folsom was opened.

In December 2006, the final leg of the Amtrak/Folsom project was extended by 0.7-mile (1.1 km), to the downtown Sacramento Valley Station, connecting light rail with Amtrak inter-city and Capitol Corridor services as well as local and commuter buses. In 2012, SACRT completed the first phase of the Green Line. The second phase of the line is planned to reach to the Sacramento International Airport. [7] In August 2015, RT extended service south to Cosumnes River College. [8] RT currently operates 97 bus routes in a 418-square-mile (1,080 km2) service area.[ needs update]

All routes operate every 15 minutes on weekdays and every 30 minutes at night and on the weekend.

The stations along the network are open-air structures featuring passenger canopies for protection from adverse weather. Twenty-six stations offer bus transfer services and 22 have park-and-ride lots with a total of 10,113 available parking spaces. [1] Works of public art included at several stations were developed as part of the RT Public Art Program, and represent an array of media including, mosaics, sculptures, metalwork and murals. Each was commissioned to incorporate an identity and sense of place unique to the neighborhood surrounding the station. [9]

The LRV fleet is composed of cars from three different builders: 36 from Siemens-Duewag U2A, some of which have been in use since the RT opened; 40 newer ones delivered in 2003 from Construcciones y Auxiliar de Ferrocarriles, and 20 Urban Transportation Development Corporation cars purchased from Santa Clara Valley Transportation Authority and refurbished by Siemens. [4]

The fleet will be further augmented by at least 28 brand new Siemens S700 series low floor light rail vehicles starting in 2022 with plans to eventually acquire 76 units to replace the existing aging fleet as additional funding is secured. [10] [11]

With the acquisition of low-floor Siemens vehicles, the system's stations are planned to be reconfigured for level boarding. [14]

Sacramento RT has several plans to expand the light rail system, but most have been placed on hold due to a lack of funding.

The most recent Sacramento Regional Transit Master Plan, adopted September 2009 included plans to extend the system to Elk Grove, Roseville, and Citrus Heights. Such extensions are unlikely before 2050. [15] [16]

The Green Line extension to Sacramento International Airport will extend service 12 miles (19.3 km) to the airport via the Natomas neighborhood. [17] [18] The line would extend northwest from the existing Green Line terminus at the 7th & Richards / Township 9 station. The plan to extend light rail to the airport has been in the works since early 1990s and is the project most requested by residents of the Sacramento region. [19] The agency has completed preparing the draft environmental impact report for the project. [20]

The project, estimated at nearly $1 billion, would be the costliest in RT's history and securing funding has been a challenge. [19] Transportation officials most recently proposed funding the project with a half-cent sales tax increase in Sacramento County, but the measure was narrowly defeated in November 2016.