The Buffalo Metro Rail is the public transit rail system in Buffalo, New York, United States; it is operated by the Niagara Frontier Transportation Authority (NFTA). The system consists of a single, 6.4-mile (10.3 km) long light rail line that runs for most of the length of Main Street ( New York State Route 5) in the City of Buffalo, from KeyBank Center in Downtown Buffalo to the south campus of the University at Buffalo in the northeast corner of the city. The first section of the line opened in October 1984; the current system was completed in November 1986. 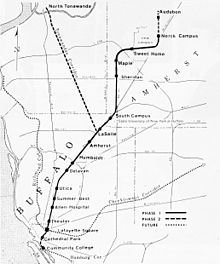 Construction on the initial Metro Rail line began in 1979 and opened in stages: the surface portion opened on October 9, 1984 [3] while the subway opened as far as Amherst Street Station on May 20, 1985, [4] following an opening ceremony on May 18. The line was further extended to University Station, serving the University at Buffalo, on November 10, 1986 due to construction issues at LaSalle Station. [5]

At the time of the start of construction, the line was intended to be the first line for an extensive heavy rail system that would spread throughout the city and suburbs. However, during the construction of the line and afterward, Buffalo's population declined significantly by approximately 55% from around 580,000 in 1950 to about 261,000 in 2010 and the new line's ridership was much lower than originally anticipated. The cost of the urban section was so high that no funding was available to extend the lines into the suburbs, including the Amherst campus of the University at Buffalo. Efforts to obtain funding for feeder lines have historically been met with little to no success.

Although a centerpiece of the original line, the downtown transit mall did not live up to expectations. Because of poor traffic patterns on Downtown Buffalo's Main Street, some business groups occasionally called for the removal of the transit system so that they can return to normal vehicle traffic and curbside parking on Main Street, hoping that this measure would recreate the prosperous days of the past. In 2008, Buffalo began a project to reintroduce cars to Main Street. [6] The project in question involved creating a shared trackbed/roadway with curbside parking, as well as the permanent closure of the Theater Station, which occurred on February 18, 2013. The closure of Theater Station meant that Fountain Plaza Station, located 546 feet (166 m) south in the 500 block of Main Street, now serves as the beginning and ending of the Free Fare Zone. On January 23, 2015, after less than two years of construction, traffic was reintroduced to the 600 block of Main Street, between Tupper and Chippewa Streets, in the Theater District. [7] [8] On December 15, 2015, traffic was reintroduced to the 500 block of Main Street, between Chippewa and Mohawk Streets, in the Central Business District.

On January 9, 2017, Governor Andrew Cuomo announced in his State of the State address that funding would be secured for the Amherst and Cobblestone line extensions. If successful, this would be the first extension in the service's history. [9] Funding for an environmental review into the Amherst extension was approved in 2018. The study is expected to take between 24 and 30 months. [10]

Metro Rail is a light rail transit (LRT) system as characterized by the American Public Transportation Association [11] although it shares many characteristics with "heavy rail" metro systems and could be considered a " light metro." [12] 80% of its track (5.2 miles (8.4 km)) is an underground subway with high-level platforms. This section has eight stations that are spaced fairly widely apart, comparable to subway systems elsewhere. This section is cut-and-cover from Allen/Medical Campus to Utica, then deep-bored from Delavan/Canisius College to University.

The remaining 20% of its track (1.2 miles (1.9 km)) are on the surface on Main Street in downtown Buffalo. [13] On the surface section, trains interact with automobile traffic from the theater district where it emerges from the tunnel until Mohawk Street where it reverts to a transit mall and at cross streets, where movements are governed by traffic signals. Catenary poles are spaced every 130 feet (40 m) to support the overhead electrical lines. [14] Metro Rail operates electric multiple-unit light rail vehicles (LRVs) in two-to-four car trains with power drawn from an overhead catenary system. Three-car trains are limited to rush hour and special events and four-car trains to special events. [13] [15] The Buffalo trains and SEPTA's light rail cars in Philadelphia are the only modern non-articulated LRVs operating in the United States.[ citation needed]

NOTE: all fares are free since late March 2020 due to the COVID-19 pandemic, up to further notice.

Fares are collected through a proof-of-payment system enforced by ticket inspectors. Travel is free on the above ground portion of the system. [16] Regular fare is $2; various passes are also available for sale. All stations have ticket machines. [17]

Metro Rail runs as follows: Monday-Friday from 5:10am–12:50am, Saturdays from 7:05am–12:50am, and Sundays and holidays from 8:00am–11:50pm (although most bus service is available until approximately 12:30am). Trains run as often as once every ten minutes at rush hour and generally no less often than once every twenty minutes. In July 2008, the NFTA reported that the passenger count "eclipsed the previous year's tally by 23%." [18] As a result of this, in September 2008, the NFTA began an earlier starting time to the weekday schedule in response to an 11% increase in ridership over eight months of growth.

Numbers are from the Federal Transit Administration's National Transit Database, which contains statistics from 1996–2011: [19]

Buffalo Metro Rail is ranked 25th in the nation in light rail daily ridership service as of 2013, with 5,058,300 passengers. However, it is noted that the line currently lacks extended branches to the suburbs, being confined to the city limits of Buffalo. One group, the Citizens Regional Transit Corporation (CRTC), advocates for expansion. [20] As indicated in its statement, the CRTC seeks to educate the public, public officials, their authorities, and agencies in the Buffalo-Niagara region about the benefits of a comprehensive transportation system including an expanded Metro Rail. In April 2011, the group stated that the 600 block of Main Street, which has Shea's Performing Arts Center along with hotels and bars, should be converted into a mixed automobile and rail system. [21] The 600 block was re-opened to automobile traffic in 2015.

In December 2012, the NFTA announced it had secured funding of $1.6 million to commission a study in 2013 of bus and rail access to University at Buffalo's North Campus. If a rail project were to be approved, the system would be running in 7–10 years. On February 28, 2013, it was announced that a group consisting of representatives from the Buffalo Niagara Medical Campus, planners from the City of Buffalo, the Buffalo Sabres and NFTA are working on a plan to extend the southern terminus of the rail line just beyond the NFTA rail yard at the DL&W Terminal to a new parking garage being built near the Medical Campus. [22]

On December 4, 2006, in The Spectrum, a publication of the University at Buffalo (UB), it was announced that John B. Simpson, who was the school's president at the time, was planning to get a project underway that would connect UB's North, South and downtown campuses via a transportation system. The proposed systems included a subway, trolley or light rail. A study, published in 2014, detailed four alternatives chosen for the corridor, including a light rail corridor and three bus rapid transit corridors. The light rail corridor would extend from a turnout at University station, head north to Niagara Falls Boulevard past the Boulevard Mall, turn to Sweet Home Road, enter the University at Buffalo North Campus and parallel Interstate 990 ending at the Crosspoint Business Park in Getzville. [23]

Planning and funding is currently underway for a northbound Niagara Falls Boulevard extension to the University at Buffalo North Campus. [24] As of 2019, the proposed turnout tunnel to Niagara Falls Boulevard has been shortened, increasing the overall length of the street-side light rail portion of the route, and a new tunnel has been added to the design near I-290. In addition, the chosen corridor would parallel Audubon Boulevard and end at a park-and-ride after passing under I-990, rather than continuing to the Crosspoint Business Park. [25] The NFTA has also released a finalized scoping report and a draft environmental study report, [26] and has been receiving community input on the project. [27] [28]

The Airport corridor would begin in Downtown Buffalo, near Church station and continue in an easterly direction in/out Division Streets, diagonally in a northeastern direction near Jefferson Avenue toward the Buffalo Central Terminal, cross Broadway and then continue eastbound in its private right-of-way to the Thruway Plaza, Walden Galleria and Buffalo-Niagara International Airport.

The Tonawandas corridor would operate from LaSalle station northwesterly to the City of Tonawanda using the abandoned Erie Railroad tracks. The NFTA purchased 12 Presidents' Conference Committee (PCC) streetcars in the 1980s to serve the Tonawanda turn-out, a proposed Metro Rail extension to Tonawanda and North Tonawanda. These cars were built by the St. Louis Car Company and acquired by Cleveland, Ohio's Greater Cleveland Regional Transit Authority second-hand in 1953. It was determined after initial trial runs that the PCCs were too wide for existing station platforms and the plan was abandoned. The PCCs were sold to the Brooklyn Historic Railway Association (BHRA) and scrapped in 2003 when the BHRA folded.

The NFTA has a fleet of 27 (originally 29) rigid-bodied (non-articulated) LRVs for the Metro Rail system, numbered sequentially from 101-127. They were built in 1983 by the Japan Transport Engineering Company ( Japanese: 株式会社総合車両製作所 Kabushiki-gaisha Sōgō Sharyō Seisakusho). [14] The cars' body shell design is notably similar to that of the earlier articulated US Standard Light Rail Vehicle, whose shells were also fabricated by Tokyu Car Corp. for Boeing Vertol. The cars have a maximum service speed of 50 miles per hour (80 km/h), but trains run at 15 miles per hour (24 km/h) in the above-ground section of the line. [14] There are three sliding doors on each side of each LRV; these doors can be opened by passengers by push buttons on the outside wall of the train when trains are stopped at stations on the above-ground section of the line. [14] However, in practice, train operators typically open all doors and extend all the retractable staircases at all above-stations. The NFTA acquired twelve PCC streetcars from the Greater Cleveland Regional Transit Authority in 1990 for service on the never-built Tonawandas branch. They were later sold to the Brooklyn Historic Railway Association in 2003. [29]

In May 2006, it was announced that all of the LRVs would be rehabilitated by AnsaldoBreda. The rehabilitation featured many improvements, including enhanced video monitoring of the railcar interiors, an upgraded braking system, rebuilt HVAC systems, rebuilt door systems, a new interior closely representing the agency's new look, upgraded propulsion systems and repairs to the body shells. In addition, the rail cars were to receive new monitoring systems, an automated announcement system calling out stations, new door chimes and interior/exterior LED signage to replace existing roll signs. The total project cost was estimated at $40 million for rehabilitation of the 27 cars. [30]

Because the refurbished cars have new car-to-car communications equipment, they are not compatible with unrefurbished cars and cannot run with them on the same train. [31] The project originally planned to use SuperSteel's manufacturing facilities in Schenectady, New York for the overhaul. However, due to the loss of orders and a dip in the economy, SuperSteel closed the facility in April 2009. The closure cost 175 jobs and delayed the rehabilitation. [32] The project later was moved to Gray Manufacturing Industries, located in Hornell, New York. [33] The first two cars were due back in revenue service in July 2010. [34]