Garbis Keurjikian standing beside the Little Armenia sign during the ceremony opening on October 6, 2000.
Neighborhood of Los Angeles in California, United States 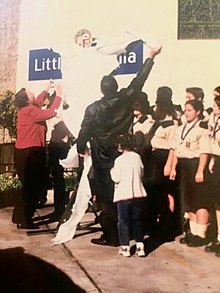 [1]Little Armenia ( Armenian: Փոքր Հայաստան) is a neighborhood in Central Los Angeles, California. It is named after the Armenians who escaped genocide and made their way to Los Angeles during the early part of the 20th century. [2]

The area is served by the Metro B Line at the Hollywood/Western, Vermont/Sunset and Vermont/Santa Monica stations.

On October 6, 2000, [3] the Los Angeles City Council designated a portion of east Hollywood as “Little Armenia” in an effort to recognize the community’s vast “presence and voice in Los Angeles.” [4]

In 1999, the Honorary Mayor of Little Armenia, Garbis Keurjikian, also known as Garo, had a vision to establish an area in East Hollywood representing the Armenians who migrated to America. He worked with councilwoman Jackie Goldberg to bring his vision to life. After working on the establishment of Little Armenia for a year, the ceremony opening took place on October 6, 2000 outside of Saint Garabed Armenian Apostolic Church. The name comes from the large number of Armenian-Americans who live in the area and also from the large number of Armenian stores and businesses that had already opened in the neighborhood by the early 1970s.

St. Garabed Armenian Apostolic Church is an Armenian church that is located inside Little Armenia. St. Garabed church is the place of worship for the vast majority of Armenians living in Hollywood. It is located on Alexandria Avenue and it was built in 1978. The church is located in front of the Rose and Alex Pilibos Armenian School.[ citation needed]

The main Los Angeles Branch of the Church of Scientology has been located in Little Armenia on Sunset Bl. between N. Catalina St. and L. Ron Hubbard Way since 1977. [6] In 1996 a small section of what was N. Berendo St. was renamed L. Ron Hubbard way. [7]

Little Armenia's only public park is Barnsdall Art Park, which includes the Frank Lloyd Wright designed Hollyhock House and a city-run arts center built in 1919-1921. The park, located on small but scenic Olive Hill, was donated to the city of Los Angeles by oil heiress Aline Barnsdall.

Many of the novels, short stories and poems of Charles Bukowski, a native of East Hollywood, are set in the area.

On April 24 each year, Armenians gather in Hollywood to commemorate the Armenian genocide. Though Hollywood was once home to the biggest Armenian community in the region, Glendale surpassed Hollywood in both the total number and proportion of Armenians in population, while Burbank, Pasadena, Montebello, and La Crescenta also have large Armenian communities but with no special designation. 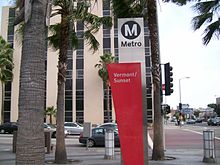 Vermont and Sunset, Children's Hospital in the background

Little Armenia is served by the Metro B Line subway which runs north-south along Vermont Avenue and east-west along Hollywood Boulevard.

The 101/Hollywood Freeway cuts northwest from downtown Los Angeles, through Hollywood, to the San Fernando Valley.

Thirteen percent of East Hollywood residents aged 25 and older had earned a four-year degree by 2000, an average figure for the city and the county, but the percentage of residents with less than a high school diploma was high for the county. [8]

Schools within Little Armenia's borders are: [9]