State Route 2 (SR 2) is a state highway in the U.S. state of California that runs from the Los Angeles Basin and through the San Gabriel Mountains to the edge of the Victor Valley in the Mojave Desert. Officially, it begins at the intersection of Centinela Avenue in the City of Los Angeles limits adjacent to the city of Santa Monica and extends all the way to SR 138 east of Wrightwood. The highway currently is divided into three segments, and it briefly runs concurrently with U.S. Route 101 (US 101) and Interstate 210 (I-210) to connect the segments. The western section of the highway is an old routing of US 66; the eastern portion is known as the Angeles Crest Highway, while the middle section is known as the Glendale Freeway along with multiple surface streets around US 101.

Play media
Time-lapse video of an eastbound trip on California Route 2 in 2017; the trip includes both the urban and mountain portions of the route.

SR 2 is known as the Angeles Crest Scenic Byway, a National Forest Scenic Byway, [4] from SR 2's east junction with I-210 in La Canada Flintridge to the Los Angeles– San Bernardino county line. The Big Pines Highway is routed along SR 2 from County Route N4 (CR N4, the northwest continuation of the designation) in Big Pines to the Los Angeles–San Bernardino county line. [5]

SR 2 is part of the California Freeway and Expressway System, [6] and except for much of the mountain portion is part of the National Highway System, [7] a network of highways that are considered essential to the country's economy, defense, and mobility by the Federal Highway Administration. [8] SR 2 is eligible to be included in the State Scenic Highway System; [9] however, only the portion of SR 2 from a point north of the I-210 interchange to the San Bernardino County line is actually designated as a scenic highway by the California Department of Transportation (Caltrans), [10] meaning that it is a substantial section of highway passing through a "memorable landscape" with no "visual intrusions", where the potential designation has gained popular favor with the community. [11]

The California Legislature has relinquished state control of various segments of SR 2 in Santa Monica, Los Angeles, Beverly Hills and West Hollywood, and turned them over to local control. [12]

SR 1 to the southeast junction with US 101 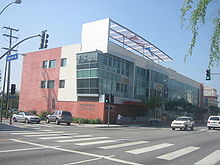 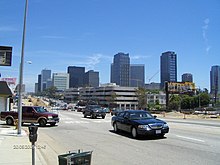 Route 2 then merges onto U.S. Route 101 (the Hollywood Freeway) and heads southeast leaving US 101 at the Alvarado Street exit.

From US 101, Route 2 heads northeast on Alvarado Street through the community of Echo Park. The route then turns north onto Glendale Boulevard. 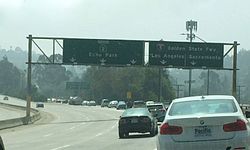 Junction of SR 2 and I-5 south of Glendale.

The route then branches northeast onto the Glendale Freeway, a north–south route. With five lanes each direction, the freeway is quite wide. It intersects the 5 Freeway (the Golden State Freeway) and then crosses the Los Angeles River, and runs through the communities of Glassell Park and Eagle Rock.

After its interchange with the eastern Ventura Freeway (SR 134), the Glendale Freeway route follows a ridge in the San Rafael Hills through eastern Glendale. The freeway ends in the Crescenta Valley, at Foothill Boulevard in La Cañada Flintridge. Just before reaching Foothill Boulevard, SR 2 turns off the Glendale Freeway onto the eastbound Foothill Freeway (Interstate 210) for a short distance until reaching the Angeles Crest Highway exit in La Cañada Flintridge.

The Glendale Freeway was originally proposed to continue through Echo Park all the way to Hollywood Freeway (101). [14] Since that plan has been scrapped, the freeway is somewhat isolated from the remainder of the LA freeway system.

Angeles Crest Highway as it winds through the Angeles National Forest.

Leaving La Cañada Flintridge at an altitude of 1,300 feet (400 m), the route turns north onto the Angeles Crest Highway. This route winds generally east-northeast through the canyons of the San Gabriel Mountains for over 80 miles (130 km), before descending through Big Pines and Wrightwood to the edge of the Victor Valley approximately 20 miles (32 km) west of Hesperia and ending at SR 138. The highway climbs to a high point of 7,903 feet (2,409 m) at Dawson Saddle. The eastern portions of the Angeles Crest Highway are notoriously dangerous, with many switchbacks and blind curves, and are often closed during occasions of heavy winter snowfall. The highway is generally closed between Islip Saddle and Vincent Gap from mid-December to mid-May due to snow and rockfall.

In 1964, Route 2 was defined as a single route from Santa Monica to Wrightwood with no discontinuities. The segment of former US 66 on Santa Monica Boulevard west of the Hollywood Freeway and Lincoln Boulevard was added to Route 2 at this time, since US 66 was truncated to Pasadena. Route 2 became discontinuous at Routes 101 and 210 in 1965 and 1990, respectively. [15]

Originally, it was to have been the Beverly Hills Freeway from Route 405 to Route 101 just east of Vermont Avenue, flowing onto the Glendale Freeway. In fact, the proposed freeway on Route 2 west of Route 101 was the original routing of the "Santa Monica Freeway" (a name which subsequently went to the distantly parallel Route 10). However, for a variety of political reasons, the department never reached agreement with Beverly Hills to build the segment through that city. At one time, the department considered building a cut-and-cover tunnel under Beverly Hills, but even this proved a non-starter, and the freeway plan west of Route 101 was quietly cancelled in 1975. Currently, the Glendale Freeway begins as a stub at Glendale Boulevard. A freeway-wide bridge was built over Glendale Boulevard in hopes that the freeway would be built further west. Today, the bridge serves as the westbound lanes of Route 2, connecting the southwestbound freeway lanes to southbound Glendale Boulevard. A more modest freeway/expressway extension to Route 101 has been discussed. [16]

Planners originally intended for it to connect to the Hollywood Freeway with Route 101 near the Vermont Avenue interchange, but community opposition killed the project by the 1960s (which is why there is a huge median around the cancelled interchange today). The Glendale Freeway offers stunning vistas of the eastern San Fernando Valley, the Verdugo Mountains, the Crescenta Valley, and the San Gabriel Mountains. [17]

In the 1960s, the city of Beverly Hills had begun a transition from a quasi- exurban retreat for the entertainment industry to its current status as one of the world's premier shopping and culinary destinations. Building a freeway along Santa Monica Boulevard, the northwestern border of the city's emergent "Golden Triangle" shopping district, did not fit into city fathers' vision for Beverly Hills' development. Moreover, it was feared that a freeway would exacerbate the already evident divisions between the fabulously wealthy residents of the hilly areas north of Santa Monica Boulevard and the merely affluent ones to the south. A proposed cut-and-cover tunnel for the freeway failed to generate sufficient political support, and by the mid-1970s the project was essentially dead.

California State Senator (later Congressman) Anthony Beilenson was one of the leading opponents of the project.

Caltrans' decision not to build the freeway was both harmful and beneficial to the areas along its proposed route. The massive Century City high-rise commercial development just west of the Beverly Hills city limits was built with freeway access in mind. For many Century City workers who live in Los Angeles' eastern suburbs, the quickest way home takes them through the residential district of Cheviot Hills, which has caused consternation among its well-heeled residents. For Beverly Hills, the decision helped preserve much of its emergent downtown, but at the cost of creating gridlock on Wilshire Boulevard and I-10.

For its entire length, until the tracks were removed, Santa Monica Boulevard followed the tracks of the Pacific Electric Railway. In the portion from Holloway Drive in West Hollywood to Sepulveda Boulevard in West Los Angeles, the tracks were in a separate right-of-way, with two roadways, one on each side of the tracks. For the rest of the route, the tracks ran in the traffic lanes. [20]

From 1936 to 1964, U.S. Route 66 ran along Lincoln Boulevard from its junction with Alternate U. S. 101 (now California Route 1) and California Route 26 (now replaced by Interstate 10) to Santa Monica Boulevard and along Santa Monica Boulevard from Lincoln Boulevard to the Hollywood Freeway. US 66 turned southeast on the Hollywood Freeway with US 101. At that time, Route 2 began on Alvarado Street at the Hollywood Freeway. As is today, Route 2 traversed Alvarado Street and Glendale Boulevard to the Glendale Freeway. Route 2 continued on the Glendale Freeway to a temporary connection with Fletcher Drive at Avenue 38 in the Atwater district of Los Angeles. From the temporary connection, the route ran northeast on Fletcher Drive, and north on Verdugo Road to its south intersection with Cañada Boulevard in Glendale. From the south intersection, Route 2 headed north on Cañada Boulevard to its north intersection with Verdugo Road, north on Verdugo Road, and east on Verdugo Boulevard, before reaching Foothill Boulevard in La Canada Flintridge. Route 2 continued approximately one mile southeast on Foothill Boulevard with California Route 118 to Angeles Crest Highway. From Foothill Boulevard, Route 2 continued north on Angeles Crest Highway, where it continues to this day. [1]

Since the 1950s, proposals have been made to extend the Glendale Freeway to the Antelope Valley Freeway via a tunnel under the San Gabriels, relieving some of the latter freeway's notorious congestion. The difficulty of designing and building such a route through the mountains (designated SR 249) and the cost of insuring it against earthquakes and terrorism would undoubtedly make perpetually cash-strapped Caltrans unable to undertake such an ambitious project. [22]

Because of its relatively short length, the Glendale Freeway is often less congested in comparison to other Los Angeles freeways. The overpass from which this picture was taken was featured as a "collapsing" bridge in the 1974 disaster film Earthquake.

The section of freeway between the Ventura Freeway ( 134) and the Foothill Freeway ( 210) was largely completed in 1973, but not fully finished until spring 1978. During this time, the closed freeway was used as a location for several films due to its relatively complete construction status, and its proximity to major movie studios in Southern California. Some of these productions included Coffy, Corvette Summer, The Gumball Rally, Death Race 2000, Cannonball, Hardcore, and several American television series including Adam-12, Emergency! and CHiPs. The transition overpass from the eastbound Ventura Freeway to the northbound Glendale Freeway was prominently featured in the notorious disaster film Earthquake when a livestock truck and two cars crash over the side of the overpass (a shot completed in miniature special effects). Ever since it was opened in 1979, this section of freeway is still relatively lightly traveled (especially on weekends), and is still utilized as a filming location.