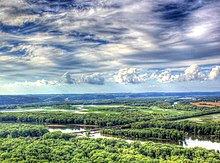 Wyalusing State Park /waɪ.əˈluːsɪŋ/ is a 2,628-acre (1,064 ha) Wisconsin state park at the confluence of the Mississippi and Wisconsin rivers in the town of Wyalusing, just south of Prairie du Chien.

Wyalusing means "home of the warrior" in the Lenape language spoken by Munsee-Delaware tribes who settled in the area in the 19th century after being displaced from farther east. 500-foot-high (150 m) bluffs dotted with prehistoric Native American mounds look out over the river valleys. Two park resources have been recognized nationally: the Wyalusing Hardwood Forest is a National Natural Landmark and the Wyalusing State Park Mounds Archaeological District is on the National Register of Historic Places.

The park is in the Driftless Area of Wisconsin, a portion of territory that remained ice free during the last ice age, while land to the east and west was crushed by glaciers. The high bluffs along the Mississippi River and the large deep canyon of the Wisconsin River are evidence of glacial meltwaters reshaping this region.

Wyalusing has more than 14 miles (23 km) of hiking trails with varying difficulty. [5]

The area is listed as one of the “Wisconsin Important Bird Areas” by the Wisconsin Bird Conservation Initiative. [8]

There are two main campgrounds: Homestead and Wisconsin Ridge, offering a total of 114 campsites [10]

The Hugh Harper Indoor Group Camp is the largest of only three indoor group camps in the Wisconsin State Park system. It has four dorm buildings (two are fully accessible) that can house up to 27 people each. There are two bathrooms in each dorm that have showers, toilets and sinks. [11]

The Lawrence L. Huser Astronomy Center is located inside the park. It is one of only two astronomy observatories located in Wisconsin state parks [12] and features a 16-inch telescope. [13] Groundbreaking for the Center took place in October 1999 [14] and it was dedicated on June 8, 2003. [15] It is named for Lawrence Huser, a park ranger who worked at Wyalusing for 30 years, beginning in 1952. [16]

The Center and observatory are run by the Starsplitters, a local nonprofit group that conducts free seasonal astronomy programs at the Center.

In 1947, the Wisconsin Society for Ornithology (WSORC) erected a monument to the now-extinct passenger pigeon in Wyalusing State Park. It is the only monument in the United States dedicated to the passenger pigeon. [17] The inscription on the monument, drafted by ornithologist Arlie W. Schorger, reads: "Dedicated to the last Wisconsin Passenger Pigeon shot at Babcock, Sept. 1899. This species became extinct through the avarice and thoughtlessness of man."

Aldo Leopold wrote the essay “On a Monument to the Pigeon” on the occasion of the dedication of the monument in 1947. A version of this essay appeared in his book A Sand County Almanac. [18]

The monument was restored and rededicated in 2014, in observance of the centenary of the pigeon’s extinction. [19] At the rededication ceremony, Stanley Temple, Beers-Bascom Professor Emeritus in Conservation at the University of Wisconsin–Madison and Senior Fellow at the Aldo Leopold Foundation, delivered a keynote speech. [20]