The Circus World Museum is a large museum complex in Baraboo, Wisconsin, devoted to circus-related history. The museum, which features not only circus artifacts and exhibits, but also hosts daily live circus performances throughout the summer, is owned by the Wisconsin Historical Society and operated by the non-profit Circus World Museum Foundation. The museum was the major participant in the Great Circus Parade held from 1963 to 2009.

In 1954, John M. Kelley, a former attorney for the Ringling Brothers, incorporated Circus World Museum with the intent of forming a museum of the Ringling Brothers Circus and circus history in general. By this time the popularity of circuses and other live shows was declining in favor of new media, such as television. After an initial period of organization and fundraising, the museum acquired a large site in Baraboo that included the former wintering grounds of the Ringling Brothers Circus. This site was deeded to the State Historical Society of Wisconsin (now called the Wisconsin Historical Society) to be used as the museum's location, and Circus World Museum opened to the public on July 1, 1959.

Owned by the Wisconsin Historical Society, the museum sits on some of the land owned by the Ringlings, and includes eight of the ten remaining Ringling buildings on the grounds. Circus World Museum holds one of the largest collections of circus materials in the world, including circus wagons, posters, photography, and artifacts used by shows from all over the United States. The museum also has smaller collections of Wild West shows and carnival materials. 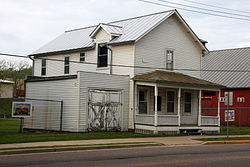 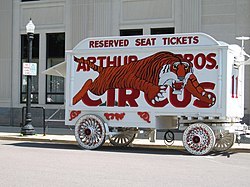 Ringlingville consists of the remaining buildings of the original wintering grounds of the Ringling Brothers Circus, a National Historic Landmark. Buildings in Ringlingville include the Ring Barn, Elephant House, Animal House, Baggage Horse Barn, Winter Quarters Office, and Wardrobe Department. Tours of Ringlingville present information on the history of the Ringling Brothers Circus, as well as offering behind the scenes glimpses into the efforts taken by the circus while preparing for shows.

The Irvin Feld Exhibit Hall is the museum's largest building, and houses exhibits on the history of the Ringling Brothers Circus, as well as other exhibits relating to general aspects of circuses and circus history.

The Hippodrome is a permanent big-top which houses the museum's daily circus and magic show performances.

The C.P. Fox Wagon Restoration Center is used by the museum to refurbish Circus Wagons, and visitors to the building can view in wagon restorations that are in progress.

The Robert L. Parkinson Library and Research Center is a research facility holding collections of circus-related books, photographs, archives, and periodicals. The library is open to the public at no charge while staff are present.

The Great Circus Parade, which featured historic circus wagons from the Circus World Museum, was held in Milwaukee in 1963, and in various cities between 1985 and 2005, primarily Milwaukee (1985–2003) and Baraboo, Wisconsin (2004–2005), [3] and Chicago, Illinois. [4] [5] When held in Milwaukee, the parade entailed a two-day journey by train across Wisconsin, from Baraboo to Milwaukee, making brief stops at cities along the way. An encampment on Milwaukee's lake front allowed visitors to view the circus wagons up close, take elephant, camel, and zebra rides, and view historical circus artifacts. The parade itself took a three-mile route through downtown Milwaukee. It was on hiatus during the mid-2000s, but it returned to Milwaukee in 2009. The parade is expected to run every few years in the future.