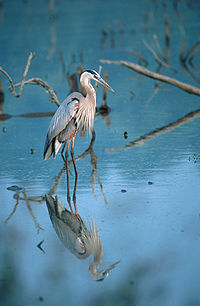 A great blue heron, one of the many migratory birds on the refuge

An executive order in 1913 declared Hog Island a national preserve for the benefit of native birds. Plum and Pilot Island were transferred from the U.S. Coast Guard to the U.S. Fish and Wildlife Service in 2007.

Plum Island and Pilot Island originally held lighthouse facilities and provided safe havens for sailors out on Lake Michigan. Some of these safe havens are considered part of the National Register of Historic Places. By 1939, the Coast Guard had taken control of Plum Island, and acquired control of the lighthouse on the island. The old wooden lighthouse was eventually replaced with a steel structure in 1964, and workers were moved to the island in order to oversee the operations of the lighthouse. At this time the lighthouse used range lights. By 1969, these lights were replaced with an automatic lighting system. The lighthouse is still in use today, but Coast Guard employees no longer remain on the island to operate it. [4]

The lack of human presence on the islands for many years has led to much reclamation of the land by the plants and wildlife native to the area. On October 17, 2007, Pilot and Plum Islands were officially added to the Green Bay National Wildlife Refuge. Previously under the control of the United States Coast Guard, they are now managed by the United States Fish and Wildlife Service. [4]

The Green Bay National Wildlife Refuge consists of three main islands which cover approximately 330 acres (1.3 km2). Hog Island covers 2 acres (8,100 m2) of land, Plum Island 325 acres (1.32 km2), and Pilot Island approximately 3.7 acres (15,000 m2). Located off the northern tip of the Door Peninsula in Lake Michigan as part of the Niagara Escarpment, these islands are mainly composed of limestone and dolomite. These rocks form the foundations of the islands, which are a result of millions of years of compaction of sediments. [1] The islands have been eroded and re-shaped over many years by changing water levels, specifically by the drop in water level of oceans and glacier movement. [2]

Green Bay National Wildlife Refuge contains a variety of plants native to the area. Hog Island has an abundance of Canada yew. This plant is greatly decreasing in number on the island because of the increase in white-tailed deer and their appetite for this shrub. The rare dwarf lake iris (Iris lacustris) can be found along the shoreline of Plum Island. [4]

Plum Island is most well known for having large forests of basswood, sugar maple, and white cedar. These trees are associated with the dolomite geology of the area. [2]

The Green Bay National Wildlife Refuge provides habitat for many kinds of wildlife, especially birds. The refuge was established first for the purpose of conserving native birds of the Great Lakes Basin. Great blue herons, red-breasted mergansers, and herring gulls are common. Migratory birds breed undisturbed by human presence on the islands. No development has occurred on Hog Island due to its small size, remoteness, and landing difficulties.

Plum Island may offer public use opportunities in the future provided they are compatible with the refuge’s purpose and mission. Because no people have been allowed on the island in recent times, the local flora grows in an undisturbed ecosystem which provides habitat for birds. [1] Pilot Island provides a safe haven for approximately 3,600 double-crested cormorant nests and about 650 herring gull nests. Black-crowned night herons also find nesting habitat there. Smallmouth bass, lake trout, lake sturgeon, and lake whitefish are commonly found in the waters northwest of Plum and Pilot Islands. [4]