Woodland Hills, California in the foreground, including Warner Center.

Warner Center is a master-planned neighborhood and business district development in the Canoga Park and Woodland Hills neighborhoods of the San Fernando Valley in Los Angeles, California. [1]

Warner Center, which began as a master-planned area, is designated as a Regional Center within the City's Canoga Park-West Hills-Winnetka-Woodland Hills Community Plan. Historically, Warner Center is generally bounded by Vanowen Street to the north, the Ventura Freeway to the south, De Soto Avenue to the east, and Topanga Canyon Boulevard on the west. The Warner Center 2035 Plan (adopted in December 2013) added the area between Vanowen and the LA River to the plan area, which comprises approximately 1,100 acres or 1.7 square miles. [2]

The area was originally planned to relieve traffic to and from downtown Los Angeles, as well as generate jobs in the San Fernando Valley. It was first envisioned in the late 1960s. [1] 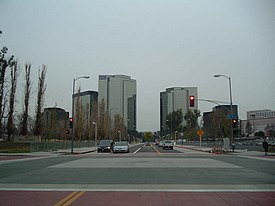 The three tallest skyscrapers of Warner Center, with lower mid-rises around them. Taken from the corner of Owensmouth and Erwin in December 2004.

Warner Center is named for Harry Warner, the eldest of the Warner Brothers, who owned the land since the 1940s, which he used as a horse ranch. His family donated 20 acres (8.1 ha) of land in 1967 that became the Warner Center Park (also known as the Warner Ranch Park), situated east of Topanga Canyon Boulevard between Califa Street and Marylee Street.

In 1968, Robert Allison, then the manager for the San Fernando Valley office of Coldwell Banker, arranged the sale of 630 acres (250 ha) of the land to Aetna Life and Casualty for $30 million. Aetna acquired the land for long-term investment and development purposes, and later brought in Kaiser as a joint venture partner. Mr. Allison spearheaded the early land planning, subdivision and development efforts on behalf of Kaiser Aetna.

Initially, large tracts of the Warner Ranch land were developed in the Canoga Park portion, between Victory Boulevard and Vanowen Avenue. Topanga Plaza, which opened in 1964 as the first enclosed shopping mall West of the Mississippi River, wast first, followed by engineering facilities and headquarter offices for the aerospace companies Rocketdyne and Litton Industries.

With the sale of the land to Aetna, the pace of development in Warner Center accelerated. Kaiser Aetna acted as a master developer, offering land for sale or lease, buildings for sale or lease, and leased buildings built to owner's specifications. Development sites from very small parcels up to 100 or more acres were offered.

In the ensuing 20 years, much of the build-out of Warner Center occurred, including approximately 4,300 multi-family dwelling units, and millions of square feet of commercial and office space. Notable developments include:

Real estate developer Robert Voit, in partnerships with Robert Allison and New England Life Insurance Company, developed the Warner Center Business Park and Warner Center Plaza. The partnerships were wound down in the early 1990s and since that time the ownership of the properties has become fragmented.

During the 1990s following the completion of the Warner Center Plaza project, relatively little new development occurred. The economic slowdown of the early 1990s, combined with the damage from the 1994 Northridge earthquake, served to put the brakes on new development for the rest of the decade.

The next major project was LNR Warner Center, which was built at the site of the former Prudential Life Insurance Company buildings between 2001-2005, totaling over 1.4 million square feet of primarily office space.

Also, in the early 2000s, a flurry of new multifamily housing projects were built. This burst of residential building created concerns in the community about issues such as traffic. In reaction to these concerns, City Councilmember Dennis Zine initiated a restudy of the Warner Center Specific Plan in 2005.

A Citizen's Advisory Committee was established in 2005, consisting of members of the local neighborhood councils including the Woodland Hills-Warner Center Neighborhood Council and the Canoga Park Neighborhood Council as well as business and property owners, which worked with city planning staff and its consultants to develop the plan. In December 2013 the plan was adopted by the Los Angeles City Council. [3]

Warner Center contains a mix of companies and industries, with a concentration in healthcare, financial services and professional services. Aerospace and manufacturing uses have declined significantly during its history, primarily attributable to regional business climate factors that favor moving production out of California. Approximately 40,000 employees worked within the Warner Center area as of 2013.

In 2011, the Los Angeles Daily News quoted City Planner Ken Bernstein as describing a new vision for Warner Center as more "cosmopolitan, 21st century." The paper added: "The plan would allow 40-story skyscrapers. Small retail shops — where locals could walk to buy basics — would be encouraged, in an area now dominated by national chains and big malls. The long superblocks and six-lane thoroughfares would be 'cut up' by adding paseos and crosswalks to create a more intimate feel for pedestrians." [4]

In 2012 the City Council approved the Village at Westfield Topanga - which included a new Costco, as well as a massive retail, dining, and entertainment development that would combine with existing Westfield Warner Center malls to make one of Southern California's largest shopping complexes: "Westfield's Big 3". The Village at Westfield Topanga is a mixed-use project designed to be a community destination and gathering place in the heart of the West Valley. The project will include over one million square feet of uses on 30.67 acres of land within Warner Center. [5]

The hospital had 12,600 admissions in the latest year for which data are available. It performed 4,055 annual inpatient and 5,197 outpatient surgeries. Its emergency room had 38,131 visits. Kaiser Permanente Woodland Hills Hospital is the highest ranked hospital in the San Fernando Valley, and ranked 13th highest hospital among Los Angeles-area hospitals because of its strength in specialties such as cancer, diabetes, endocrinology, gynecology, orthopedics and urology." [7]