The Florida Atlantic Owls are the athletics teams of Florida Atlantic University (FAU). The Owls participate in the National Collegiate Athletic Association (NCAA)'s Division I as members of Conference USA. Florida Atlantic has attracted high-profile coaches in the past for various sports, including Howard Schnellenberger and Lane Kiffin for football and Mike Jarvis for basketball. Other former coaches include Matt Doherty, Rex Walters, and Sidney Green. As of March 2018, the Owls are led by athletic director Brian White. [2]

The logo and mascot of Florida Atlantic University's athletic teams is the burrowing owl. Owlsley is the name of the mascot for Florida Atlantic University. The presence of this bird has been popular on the land of the university, even preceding the construction of FAU. At the dedication ceremony in 1964, President Lyndon B. Johnson even made notice and reference to the popular presence of the bird. [3] In 1971, the National Audubon Society designated FAU's land an official owl sanctuary, honoring the tradition of the bird's presence and moving to protect the birds from attempts to expand construction of the university. Owls are still dominant in their presence on the Boca Raton campus to this day. With the addition of intercollegiate athletics in the mid-1980s, the university used the bird as its mascot - an animal that denotes wisdom, determination and cognizance. 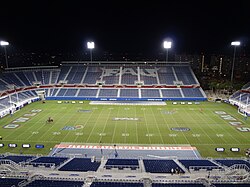 Florida Atlantic University fielded its first football team in 2001, coached by former Miami and Louisville coach Howard Schnellenberger. Their first game was a 40–7 loss against Slippery Rock University on September 1, 2001. After just four seasons of existence, the Owls jumped from Division I-AA (now FCS) competition to Division I-A (now FBS), joining the Sun Belt Conference. Through the 2008 season, after eight years of competing in football, the Owls are 47–47 overall. In 2007 they competed in their first bowl game, the New Orleans Bowl, where they defeated the Memphis Tigers 44–27. In 2008, the Owls competed in their second straight bowl game, the Motor City Bowl, where they defeated the Central Michigan Chippewas by a score of 24–21.

In 2010, quarterback Rusty Smith became the first FAU player to be drafted.

The Owls opened their new on-campus FAU Stadium on October 15, 2011, against Western Kentucky.

The Owls' natural rival are the Florida International Golden Panthers, who are located just 50 miles from Florida Atlantic and also compete in Conference USA. The rivals meet annually in a conference match up named the Shula Bowl, after Miami Dolphins coach Don Shula. [4] The first Shula Bowl was played in 2002 at the Miami Dolphins' Pro Player Stadium (now Hard Rock Stadium), and since alternated between FAU at Sun Life Stadium and FIU Stadium annually; the first game in the series at the Owls' new stadium was in 2012. FAU leads the all-time series thirteen games to four.

On December 12, 2016, the program hired the fourth coach in program history; Lane Kiffin. Kiffin was formerly the head coach for the Oakland Raiders of the NFL, the University of Tennessee Volunteers, and the University of Southern California as well as the former Offensive Coordinator for the University of Alabama under Nick Saban. [5] He led the Owls to two conference championships in 2017 and 2019, as well as a 2017 Boca Raton Bowl victory, where the Owls defeated the Akron Zips by a score of 50-3.

On December 11, 2019, FAU announced the hiring of former Florida State University head coach Willie Taggart as the next head coach. [6] On December 21, 2019, former interim head coach and current University of South Florida defensive coordinator Glenn Spencer led the Owls to their fourth bowl victory in the Boca Raton Bowl, where the Owls defeated the SMU Mustangs by a score of 52-28.

Florida Atlantic Baseball fielded its first squad in 1981. Since inception FAU has had only three coaches. Kevin Cooney, most successful coach in school history, was the Florida Atlantic head baseball coach from 1988 through 2008. By many accounts, Cooney built a mid-major dynasty in the baseball world. University of Cincinnati head coach Brian Cleary called FAU "one of the country's best baseball programs," and added, "it's been an incredibly successful program over the last several years." [7] Coach Cooney won his 800th career game on March 15, 2006, when FAU played Columbia. At FAU, Cooney won more than 700 games.

Currently the Owls are coached by long-time assistant for Cooney, John McCormack. McCormack was an assistant under Cooney at FAU for 18 seasons. 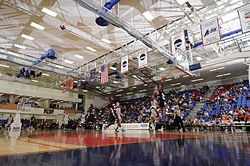 FAU basketball began play in 1988 and in its 19+ seasons has experienced limited success, marred with frequent coaching changes. Along with the other FAU athletics teams, basketball entered the Sun Belt Conference in the 2006–2007 season, and has shown signs of maturing into a national competitor. The Owls competed on the Division II level from 1988 to 1993 before joining the Atlantic Sun Conference when moving to Division I in the 1993–1994 season.

The Owls were coached by Rex Walters in 2006–2008, a former standout at Kansas. Walters played a major role in the Jayhawks' run to the Final Four in 1993. Coach Walters became the 6th head coach of FAU basketball, after Matt Doherty left the university a year into his tenure to coach at SMU.

The Owls are currently coached by Dusty May, in his first head coaching opportunity.

The Owls play at FAU Arena, briefly known as RoofClaim.com Arena and commonly referred to as The Burrow.

The rivalry between FAU and Florida International University was born in 2002, when FIU's newly formed football program signed on to an annual matchup with FAU, alternating between home fields. The game was come to be called the Shula Bowl. All-time, FAU leads the football series. On the basketball court, FIU has been on the better part of the rivalry, leading the all-time series 8–11. In the 2006–07 season, FAU swept the season series (3 games).

Troy University has been a long-time rival of FAU, as both schools participated in the Atlantic Sun Conference and now both moved to the Sun Belt Conference. Both schools' baseball teams constantly competed as top programs in the Atlantic Sun, and currently both maintain that elite status in Sun Belt baseball competition. Along with baseball, football and basketball also share in the rivalry. Both programs' football teams cracked the surface as Division I-A competitors around the same time. (FAU created a team in 2001 and joined D-IA in 2004; Troy moved from Division I-AA to D-IA in 2003.) Although FAU football has seen unprecedented success at such a rapid pace against Sun Belt competition, Troy had beaten FAU in all 3 of their football meetings, inciting the rivalry. However, in 2007, FAU defeated Troy in the final game of the season, winning the Sun Belt Conference, and earning a spot in the New Orleans Bowl, the fastest ascent to a bowl game in D-IA history. This rivalry has declined due to FAU's move into Conference USA in 2013, with 2012 being the last time the two schools played each other in football.

Owlsley the owl is the official mascot of Florida Atlantic.

FAU Owls home and road games for football and basketball can be heard locally (the "tri-county area" of South Florida - Palm Beach, Broward, and Miami-Dade counties) on WMEN Fox Sports 640 AM South Florida (formerly known as "640 The Hurricane Sports Radio") on the radio, on the station's webstream, and thru their stream on the TuneIn application. [15] The voice of Owls football is part-time ESPN 106.3 West Palm 's Ken LaVicka. All football and basketball games can be heard live on FAU's website, as well.

Occasional FAU football and, as of 2019, all FAU men's basketball games are broadcast by ESPN+, the streaming service from ESPN. Other networks that have broadcast FAU games in recent years include FOX, ESPNU, NFL Network, CBS Sports Network, Stadium, and ABC.

The Florida Atlantic University Athletic Hall of Fame inducted its inaugural class of members in 2006. [16]