FIU's colors are navy blue and gold, and their mascot is the Panther (taken from the Florida panther, an endangered species endemic to the nearby Everglades), which is embodied by a panther named Roary the Panther. The school's original nickname was the "Sunblazers", but it was changed in 1987 to the "Golden Panthers", with the word "Golden" officially dropped beginning with the 2010–11 school year.

Many players from past years have been drafted by Major League Baseball teams and have played in the majors. FIU's most notable baseball alumni is Mike Lowell, former third baseman of the New York Yankees, Florida Marlins, and Boston Red Sox. Lowell was the 2007 World Series MVP. Garrett Wittels finished the 2010 season with a 56-game hitting streak, two hits shy of the Division I record, set the FIU season record for hits, was nominated for the Best Male College Athlete ESPY Award for his 2010 performance, won Sun Belt Conference Player of the Year honors, and was named a NCBWA and Louisville Slugger/TPX Preseason All-American. [3] [4] [5] [6] 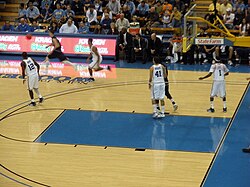 The current head coach of the FIU men's basketball team is Anthony Evans, who was hired on April 15, 2013.

FIU men's basketball team had its lone NCAA Tournament appearance in the 1995 tournament under then Head Coach Bob Weltlich. FIU won the TAAC Basketball Tournament and in doing so earned an automatic bid for the NCAA Tournament. FIU was seeded #16 and played the #1 seeded UCLA Bruins in the first round of the West Regional, which was played at the Taco Bell Arena in Boise, Idaho. The Panthers lost the game to the Bruins by the score of 92–56, being the first tournament win in UCLA's successful run to the National Championship that year.

FIU alumni who have played in the National Basketball Association include Carlos Arroyo and Raja Bell. 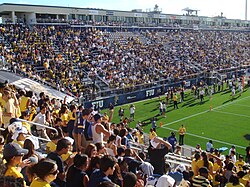 The Panthers play at the on-campus Riccardo Silva Stadium. 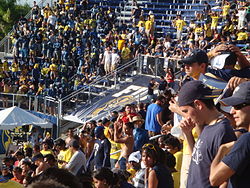 FIU fans at a football game at Riccardo Silva Stadium.

The FIU Panthers football team competes in the NCAA FBS Football Bowl Subdivision (formerly known as Division I-A), the highest level in intercollegiate football, and is a member of Conference USA. They are led by head coach Butch Davis and play at Riccardo Silva Stadium on FIU's University Park campus. The team began playing in 2002 as a member of NCAA Division 1-AA, now known as the NCAA FCS Football Championship Subdivision. Three years later, the FIU Athletics Department decided to move the program up to Division 1-A. FIU became the fastest school to make such a move from a program's inception.

The FIU football team's main rivals are the Florida Atlantic Owls and the University of Miami Hurricanes. Both FIU and Florida Atlantic play annually in a game known as the Shula Bowl. The game is named after former Miami Dolphins head coach and Football Hall of Fame inductee Don Shula. The Panthers and Hurricanes last played on November 23, 2019 at Marlins Park, with FIU defeating UM 30-24.

FIU has won two NCAA Division II national championships in men's soccer. In 1982, FIU beat Southern Connecticut State by the score of 2–1, to win the school's first national title in any sport. Two years later the Panthers won their second national title beating Seattle Pacific University 1–0. To date these are the only national titles the university has achieved in athletic competition.

Recently, two new soccer fields were finished in the summer of 2007 on the northwest side of campus. These fields will complement the other two, making four soccer fields for use by both the men and women's soccer teams, as well as practice fields for the football team.

The women's soccer team competes in Conference USA after previously being unaffiliated from 1985–1999 and a member of the Sun Belt Conference from 2000 through 2012.

FIU's softball team competes in Conference USA after previously being a member of the Atlantic Sun Conference in 1998, Independent from 1999 to 2000, and of the Sun Belt Conference from 2001 through 2012. The team plays its home games at Felsberg Field at FIU Softball Stadium.

FIU's Swimming & Diving team competes in Conference USA after previously being a member of the Sun Belt Conference from 2003-2004 through 2012-2013.

FIU's Track & Field teams compete in Conference USA after previously being a member of the Atlantic Sun Conference in 1998. 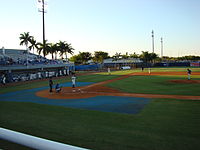 Mike Martinez [9] batting for the Panthers at FIU Baseball Stadium, home of the Panther baseball team

Riccardo Silva Stadium was originally opened in 1995 as a standard track and field athletics stadium, with mobile seats for the football end zones and an artificial turf infield. In 2007, the stadium was closed and converted into a dedicated football stadium, with the track removed, the original turf replaced with FieldTurf, and permanent stands providing 20,000 seats. It was re-opened in time for the 2008 college football season. Further improvements to FIU Stadium are ongoing, with a future capacity target of 45,000 seats.[ citation needed]

During Riccardo Silva Stadium's reconstruction, the Panthers football team played at the Miami Orange Bowl in the 2007 season, and actually won the final college football game played at the stadium before it was demolished to make way for the new Marlins Park.[ citation needed]

Ocean Bank Convocation Center (previously known as Sunblazer Arena, Golden Panther Arena, Pharmed Arena, U.S. Century Bank Arena, and FIU Arena), is a 6,000-seat multi-purpose arena that opened on February 1, 1986. The FIU Panthers' basketball and volleyball teams play there. It was originally named Sunblazer Arena but was renamed Golden Panther Arena when FIU's athletic teams changed their nickname from Sunblazers to Golden Panthers in 1987. It was eventually renamed on September 1, 2004 in honor of Pharmed Group after a $1 million USD donation was made to the FIU athletic department by Pharmed owners Jorge and Carlos de Cespedes. After Pharmed was liquidated in 2008 the arena name was briefly changed to FIU Arena. Later in 2008, the name was changed to U.S. Century Bank Arena when the local bank of that name acquired naming rights. The name reverted to the FIU Arena name in 2014, but was renamed the Ocean Bank Convocation Center in January 2018.

Other events such as MTV's Campus Invasion, the Miss Universe Contest, National Political Rallys, music concerts, ceremonies and fairs are also held year-round at the arena.

Infinity Insurance Park is a baseball stadium located in the Modesto A. Maidique Campus of Florida International University in Miami, Florida. It is used as the home venue of the university's baseball team. The facility opened on January 26, 1996 with an FIU victory against Bethune–Cookman, 1–0. The baseball team played its 2000 season at the Homestead Sports Complex in Homestead, Florida while the facility underwent an expansion.

The stadium was renamed Infinity Insurance Park in 2018.