Under Jim Leavitt, USF began college football play as a Division I-AA independent in 1997, after having their first team meetings under a tree on campus. The team grew rapidly and moved to Division I-A in 2001, where they remained an independent. In 2003, the Bulls moved to Conference USA, but they would leave for the Big East Conference in 2005. The Big East eventually became the American Athletic Conference in 2013 as part of the major college football realignment. The football team plays its home games in Raymond James Stadium, also the home field of the National Football League's Tampa Bay Buccaneers.

On September 16, 2007, a week after defeating Auburn, USF was nationally ranked for the first time in the young program's history. The AP poll listed USF at #23, while the USA Today Coaches Poll had the Bulls at #24. This was an NCAA record, as USF achieved its first Top 25 ranking faster than any other Division I-A school in the modern era. Since becoming a bowl-eligible Division I-A member in 2001, the Bulls were ranked after 104 AP Polls during the 4th week of their seventh season. Boise State had the previous record, getting ranked after 115 AP Polls during the 13th week of its seventh year as a bowl-eligible Division I-A member. [3] On October 14, 2007, after the AP, Coaches', and BCS rankings were released, the Bulls were ranked #2, #3, and #2 respectively, the highest ranked the school's football program has ever been. However, on Thursday, October 18, the Bulls lost to the Rutgers Scarlet Knights in a 30-27 upset in Piscataway, New Jersey. Two more losses followed, knocking the Bulls out of the college rankings. The Bulls rebounded to finish the 2007 season 9–3, ranked #21 in the BCS standings, and earning a spot in the Brut Sun Bowl. The Bulls, however, lost to the Oregon Ducks by a score of 56–21 in that contest.

On September 12, 2008, the Bulls defeated #11 ranked Kansas 37-34 at Raymond James Stadium. USF would win its next two games, getting to 5-0, and being ranked #10 in the AP Poll, before losing to Pittsburgh 26-21. The Bulls would finish the season 7-5, which earned them a spot in the inaugural St. Petersburg Bowl against the Memphis Tigers, which they would win 41-14.

On September 26, 2009, USF defeated in-state rival, #18 ranked Florida State, 17-7 at Doak Campbell Stadium. On October 4, 2009, the Bulls entered the AP rankings for the first time in the 2009-10 season, coming at #23 after beating Syracuse 34-20. The following week, they lost to the highly favored #8 ranked Cincinnati Bearcats. The Bulls would get back into the AP Poll a few weeks later after a 30-19 victory over #20 West Virginia, however for the second time in three years, Rutgers would defeat a ranked Bulls team, scoring a 31-0 victory on November 12, 2009, and the Bulls would fall from the AP Poll. The Bulls would finish the season 8-5 and earn a spot in the International Bowl against the Northern Illinois Huskies. The Bulls would go on to win 27-3.

Leavitt was fired on January 8, 2010 after an investigation alleged that, during halftime of a game against Louisville, he grabbed a player by the shoulder pads and struck him twice across the face. The investigation also claimed that Leavitt interfered with the investigation by telling several coaches and players to change their stories. Leavitt maintains he never struck the player, but was merely trying to console him, and after a wrongful termination suit against USF, the school eventually settled with Leavitt for $2.75 million.

On January 14, 2010, Skip Holtz was hired away from East Carolina and named the team's second head coach. The Bulls went 8-5 in Holtz's first season, finishing it off with a 31-26 Meineke Car Care Bowl victory over Clemson. USF started the 2011 season on a high note, defeating #16 Notre Dame 23-20 at Notre Dame Stadium. The Bulls reached #16 in the AP Poll after starting the season 4-0, but a 44-17 loss to Pittsburgh would drop them from the rankings. The Bulls would struggle for the rest of season, finishing with a record of 5-7, and failing to qualify for a bowl game for the first time in 7 seasons. The Bulls' 2012 was its worst to date, as the team finished 3-9.

On December 8, 2012, USF announced that Willie Taggart, who previously coached at Western Kentucky, would be the third Head Coach in USF football history. The Bulls struggled in Taggart's first year, posting a 2-10 record, however, the team improved slightly in his second year, finishing 4-8. Taggart finished his third season at USF 8-5 with a loss in the Miami Beach Bowl to Western Kentucky. 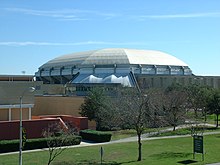 The birth of the college basketball program at the University of South Florida was in 1971. The first game was a 74–73 victory over Stetson University at Curtis Hixon Hall in downtown Tampa. The season ended with eight wins and 17 losses. Since 1980, home games have been played at the USF Sun Dome. 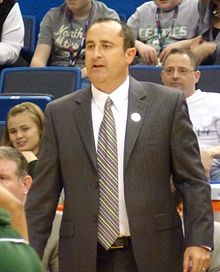 USF Director of Athletics Mark Harlan announced the appointment of Brian Gregory as the 10th head coach of the USF men's basketball program on March 14, 2017.

Gregory, who has previously led programs at Georgia Tech (2011–16) and Dayton (2003–11) and spent nearly a decade as an assistant coach under Michigan State head coach Tom Izzo, brings nearly 250 career head coaching wins and six postseason appearances, including the 2010 NIT championship, to Tampa. [5]

The women's head coach is Jose Fernandez. Fernandez arrived in Tampa in April 2000, as a women's basketball assistant coach and was officially named head coach on December 14, 2000. As head coach at USF, he has guided the Bulls to five-straight postseason tournaments and to the cusp of bringing his program into the upper echelon of the Big East Conference. Under his tutelage, USF advanced to the program's first-ever NCAA Tournament during the 2005-06 season, and to 10 postseason tournaments in 11 years after the Bulls had recorded just three winning seasons, all 14-13 records, in the 25 years prior. Fernandez also guided USF to four 20-win campaigns — 21-11 in 2004-05, 21-12 in 2006-07, 27-10 in 2008-09, 22-11 in 2012-13 and 23-13 in 2013-14; in his career. On April 4, 2009, Fernandez led the team to their first-ever post season championship with a 75-71 win over the Kansas Jayhawks in the WNIT. Fernandez also won USF's first women's basketball NCAA Tournament game, beating Texas Tech in the first round of the 2013 NCAA Tournament.

The head baseball coach is Billy Mohl. The team plays at USF Baseball Stadium on campus.

From 2006–2014, Lelo Prado was the program's head coach. He was a native of Cuba who grew up in Tampa before embarking on a successful college coaching career that includes back-to-back NCAA Division II National Championships in his hometown. He returned to Tampa on June 16, 2006, to become the fifth coach in the USF baseball program's history. In his first two years with the Bulls, Prado produced consecutive Big East Tournament appearances, picking up a pair of wins in the post-season tournament both years.

A nationally recognized women's sailing program at USF is coached by Allison Jolly the gold medalist in the first olympic women's sailing event at the 1988 Summer Olympics in Seoul.

The USF men's soccer team beat St. Johns to win the Big East Conference title in 2008. They made it to the Elite Eight of the 2008 NCAA College Cup Championships, where they lost to number 1 seed Wake Forest.

The USF women's soccer team is led by coach Denise Schilte Brown, who became the second coach in the program's history. She joined the program in December 2006 and had previously coached at Virginia Commonwealth and University of Maryland-Baltimore County. In 2010 the women's soccer teamed earned their first berth to the NCAA tournament.

Men's head coach Matt Hill joined USF during June 2012, replacing long-time coach Don Barr (1992-2012). Hill spent five years at Mississippi State as an assistant coach before coming to USF, and coached the Bulls to a conference championship in 2014. In 2015 the USF Men's Tennis Team captured once again the conference championship after beating Tulsa in the finals. During the 2015 NCAA team championships USF beat Boise State in the first round and number 15 seed Virginia Tech in the second round to advance to the Sweet 16 for the first time in program history. USF was eliminated by Baylor after an intense dual match that the Bears ended up winning 4-1.

Courtney Draper was named the 11th head coach in USF volleyball history in June 2012, and has started a program turnaround, leading USF to its best conference finish (4th) since 2002 during the 2013 season, and receiving top-100 ranking by PrepVolleyball.com for three consecutive recruiting classes (2012-2014). 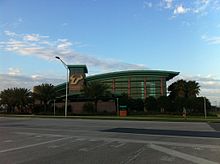 Opened in 2004, the Lee Roy Selmon Athletic Center is the main hub for USF Athletics. [7] In 2012, the facility was dedicated to the late Lee Roy Selmon, a Pro Football Hall of Fame member and former Director of USF Athletics. [8] Selmon is considered by many to be the "Father of USF Football." [8] The 104,000 square foot facility houses all USF sports teams, except for men's and women's basketball, sailing, and volleyball. [7] The building features a large strength and conditioning center, a sports medicine clinic, and an Academic Enrichment Center complete with a computer study lab, a library, study lounges, and academic counseling. [7]

The USF Sun Dome on the Tampa campus is the home facility of the men's and women's basketball teams and the women's volleyball team. The first event held in the facility was a basketball game in 1980. [9] Since the opening of the arena, it has been the site for USF Commencement Ceremonies, orientation sessions, and other major university events. [10] The facility has also played host to a number of outside events including sports and entertainment events, consumer shows, religious services, conventions, rodeos, youth sports camps, gymnastics and cheerleading competitions, lectures, and political rallies. [11] The venue is also one of the top concert spots in the Tampa Bay region, having hosted musicians like Elton John, Florence and the Machine, Frank Sinatra, Heart, Sting, and more. [12]

The USF football team began its inaugural football game in 1997 at Houlihan's Stadium (Tampa Stadium) with an 80-3 win over Kentucky Wesleyan College. [9] The stadium is home to the professional football team the Tampa Bay Buccaneers, making USF one of only a few American college teams to play in an NFL stadium. [13] Located ten miles away from the USF Tampa campus, the stadium has a capacity of more than 65,000 people. [13]

The Herd of Thunder, often called HOT or the Pride of the Bay, is the athletic band of the South Florida Bulls, including the show band, pep band, and marching band ensembles, although it is often used to refer simply to the marching band. It was founded in 1999, two years after USF fielded its first football team.

USF is known in the cheerleading world and has a strong co-ed team and all-girls squad. In 2010, the All-Girl squad finished 3rd at UCA nationals, and routinely finishes in the top five. The Co-Ed squad is one of the top 15 programs in the nation to cheer for.

The USF Sun Dolls are an all-girl dance team that perform at USF football and basketball games, in addition to competing in the annual Universal Dance Association College Nationals. [14] The USF Cheerleading program consists of two teams — a co-ed team and a competitive all-girl squad. [15] The all-girl squad continually ranks among the top five competitive college squads in the nation. [15]

The USF Bulls Rugby Football Club was founded in 1969. The Bulls play college rugby in the South Independent conference against local rivals such as Central Florida and Florida State. The Bulls were the USA Rugby South champions in 2009 and again in 2011. USF used to play Division II, but were promoted to Division I college rugby in 2011. The Bulls play sevens in the fall, and fifteens in the winter and spring. [17] The Bulls are led by Head Coach Gordon Campbell. [18] USF Rugby offers a limited number of scholarships for rugby student-athletes. [19]