4 Times Square, also formerly known as the Condé Nast Building, is a skyscraper in Times Square in Midtown Manhattan, New York City. Located on Broadway between West 42nd and 43rd Streets, the structure was finished in January 2000 as part of a larger project to redevelop 42nd Street. The architects were Fox & Fowle, who also designed the Reuters Building as part of the larger project. The 809-foot (246.5 m), 52- story building is the 28th tallest building in New York City and the 59th tallest in the United States. Owned by the Durst Organization, the building contains 1,600,000 square feet (150,000 m2) of floor space.

The building was designed by Fox & Fowle, chosen for their experience designing ecologically sustainable buildings. [2]

4 Times Square is one of the first and most important examples of green design in skyscrapers in the United States. Environmentally friendly gas-fired absorption chillers, along with a high-performing insulating and shading curtain wall, ensure that the building does not need to be heated or cooled for most of the year. The air-delivery system provides 50% more fresh air than is required by New York City Building Code, [3] and recycling chutes serve the entire building. The building uses solar technology and PureCell Systems fuel cells. It was the first project of its size with these features, for which it received awards from the American Institute of Architects and AIA's New York state chapter. 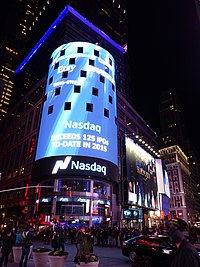 If the building's antenna is included, the structure's total height is 1,118 feet (340.7 m), making it the sixth-tallest structure in New York City, behind One World Trade Center, the Empire State Building, 432 Park Avenue, 30 Hudson Yards and the Bank of America Tower.

The original antenna was built primarily for Clear Channel Communications (now iHeartMedia, Inc.) as a backup transmitter site for its four FM stations. It was replaced between 2002 and 2003, with a 300-foot (91 m) mast to broadcast television and radio signals as a backup transmission site. This was done so that work could be completed to transfer those that were displaced by the destruction of the World Trade Center to the Empire State Building, without disruption to the existing FM tenants at the Empire State Building. [4] The mast has four tiers: The top for WJLP, one for VHF, one for UHF, and one for FM. Currently, twelve FM stations use the site as a backup, and four— WBGO, WKCR-FM, WNYE, WBAI use it as a primary site. (WBGO does not use the master antenna, they have their own installed antenna below). One FM translator, W220EJ (repeats WFMU), also uses the tower. [5] Two TV stations are using the mast for auxiliary use, and one for primary. [6] The antenna systems and mast were constructed by Dielectric Communications of Raymond, Maine, Shively Labs of Bridgton, Maine, and Electronics Research Inc., of Chandler, Indiana. [7]

In 1995, 4 Times Square was the first speculative office building to be developed in New York City in almost a decade, but it was fully leased and occupied almost immediately after completion. [8] The major office space tenants were Skadden, Arps, Slate, Meagher & Flom, a prominent U.S. law firm, and magazine publishing company Condé Nast. Both have vacated 4 Times Square, however: Conde Nast moved from its namesake building to One World Trade Center in Lower Manhattan in November 2014 and Skadden Arps moved to One Manhattan West in 2020.

H&M has the majority of the retail space in the building (formerly occupied by ESPNZone); in August 2013, the retailer announced that it would be installing four illuminated panels bearing the company logo atop the tower. [9]

The building's northwest corner holds NASDAQ's 24,000-square-foot (2,200 m2) MarketSite, a seven-story cylindrical tower whose electronic display provides market quotes, financial news and advertisements. The ground floor of the MarketSite contains a television studio with a wall of monitors and an arc of windows looking out onto Times Square. In February 2018, NASDAQ signed a 15-year, 145,000-square-foot (13,500 m2) lease to move the company's global headquarters to the building. [17] The company expanded to 180,000 square feet (17,000 m2) in May 2019 by leasing the entire 28th floor. [18] CNBC broadcasts Squawk Box, Fast Money and several of its signature financial markets television shows from the MarketSite at 4 Times Square.

A replica of the Condé Nast Building is featured in the Battlestar Galactica universe, as a prominent building in the Caprica City skyline. It can be seen during scene of the city in the series finale " Daybreak: Part 2". It can also be seen briefly in the pilot for the Caprica television series. The building is also featured in Grand Theft Auto IV, as part of Liberty City and the 2009 documentary about Anna Wintour, The September Issue. It is a central location in The Accidental Husband. It is also featured in police-career simulation game True Crime: New York City, including a realistic version of the building's Times Square location, as well as in the game Prototype as part of the skyline.

The building was the basis for the fictional Elias-Clark building in Lauren Weisberger's novel The Devil Wears Prada, where the head office for fictional Runway magazine is located. Weisberger based the plot on her own experiences as assistant to Vogue editor-in-chief Anna Wintour, whose offices were located in the Condé Nast building.

The building is the location for the climactic action sequences in both The Amazing Spider-Man and Teenage Mutant Ninja Turtles, and it is used for some scenes in the 2001 film Vanilla Sky.

The building appears in Jessica Jones as the location of the radio station WNEX, which hosts Trish Walker's radio show Trish Talk.

The building the space occupies is the location of the main building of the Stark Tower Complex in many American comic books published by Marvel.

The YouTube channel WIRED and its "Google Autocomplete interviews", are produced in the building, which was mentioned by John Krasinski in one of those interviews.