From Wikipedia, the free encyclopedia
"U.S. Steel Building" redirects here. It is not to be confused with One Liberty Place, or the Empire Building (previously called the U.S. Steel Building).
Office skyscraper in Manhattan, New York

One Liberty Plaza, formerly the U.S. Steel Building, is a skyscraper in the Financial District of Lower Manhattan in New York City. It is situated on a block bounded by Broadway, Liberty Street, Church Street, and Cortlandt Street, on the sites of the former Singer Building and City Investing Building.

The building, completed in 1973, is 743 ft (226 m) tall and has 54 floors. At 2.3 million sq ft (210,000 m2), each floor offers almost 1 acre (0.40 ha) of office space, making it one of the largest office buildings in New York by usable interior space. Its facade is black, consisting of a structural steel frame. South of the building is Zuccotti Park, formerly called Liberty Plaza Park.

One Liberty Plaza was originally commissioned by U.S. Steel, and also housed the headquarters of Merrill Lynch. A variety of tenants occupy the space, from large law firms to public and not-for-profit agencies like the Lower Manhattan Development Corporation and the World Trade Center Memorial Foundation as well as new businesses. Since 2001 One Liberty Plaza has been owned and operated by Brookfield Office Properties. 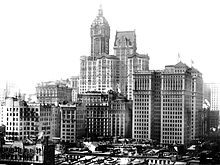 Predecessors at the site, demolished to make way for One Liberty Plaza: Singer Building (tallest tower in the center of the image) and City Investing Building (second tallest, with slanted roof)

Image of the World Trade Center site, facing One Liberty Plaza, 17 days after the September 11 attacks.

The Singer Building, the tallest in the world from 1908 to 1909, and the City Investing Building adjacent to it were demolished from 1967 to 1968 to clear land for One Liberty Plaza's construction. One Liberty Plaza had more than twice the interior area than the two former buildings combined. [2]

The building had a substantial renovation in 1989, which involved the creation of a new lobby and elevator system. The lobby and elevators have an extensive security system, and the building has a connection to the New York City Subway's Fulton Street/ Fulton Center station ( 2, ​ 3​, 4, ​ 5​, A, ​ C, ​ E​, J​, N, ​ R, ​ W, and Z trains) in the basement.

In 2001, Brookfield Office Properties bought the property for $432 million. [3] Following the September 11 attacks, and the subsequent collapse of the World Trade Center nearby, One Liberty Plaza sustained significant facade damage. The building needed hundreds of windows that had been blown out on its western facade to be replaced, and the removal of heavy dust and debris from the floors and equipment on the roof. An outside area on the street beside Brooks Brothers on the ground floor of the building was used as a temporary morgue in the days following the attack.[ citation needed] At one point there was a rumor going around that the building was in danger of collapse. These claims were quickly refuted by the New York Times:

There are no structural concerns with this building," said Ilyse Fink, the director of communications for the city's Department of Buildings, reinforcing a message she has delivered almost daily since Sept. 12. "It is not and was not in danger of collapse. The building is structurally sound." [4]

The building was planned to be reopened to office workers with a ribbon cutting ceremony on October 22, 2001. [4] But the day before it was to happen, it was decided that it was not yet sufficiently safe for employees to return to the office tower. The tower reopened on October 24, two days after originally scheduled. [5]

In December 2017, Brookfield sold a 49% stake in the tower to Blackstone, valuing the tower at $1.55 billion. [7] The sale of the minority stake followed the refinancing of the building in August 2017 with a $784 million loan from Morgan Stanley.

The following is a list of the tenants by floor: [13]