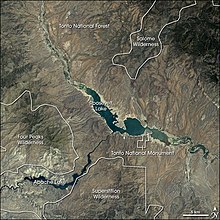 Roosevelt Lake is the oldest of the six reservoirs constructed and operated by the Salt River Project. It also has the largest storage capacity of the SRP lakes with the ability to store 1,653,043 acre-feet (2.039 km3) of water when the conservation limit of Roosevelt Dam is reached. When the dam is in flood-control mode, the lake can store 2,910,200  acre⋅ft (3.590 km3) of water; [2] [3] however, the U.S. Army Corps of Engineers requires all water over the conservation limit to be released from the lake within 20 days. [4]

Aerial view of the dam 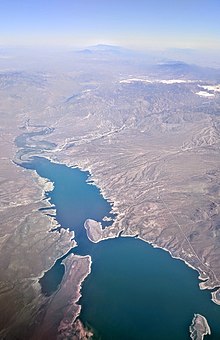 Aerial view of the upper part of the lake

Roosevelt Lake is located in central Arizona almost entirely within Gila County although a small portion lies in Maricopa County. Located about 4 miles (6 km) upstream from Apache Lake (the next SRP reservoir on the Salt River), Roosevelt Lake occupies about 10 miles (16 km) of the original Salt River riverbed and also extends for about 8 miles (13 km) up Tonto Creek, a significant tributary of the Salt with its headwaters along the Mogollon Rim. The lake covers much of the southern portion of the Tonto Basin, a low-lying area between the Sierra Ancha Mountains, Mazatzal Mountains (including Four Peaks), and the Superstition Mountains. State Route 188 travels along the shore of the lake for much of its length. Tonto National Monument is located 4 miles (6 km) from Roosevelt Dam. Parts of the monument provide views of much of the reservoir. 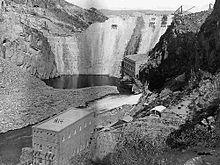 Theodore Roosevelt Dam under construction in 1906.

Fishing is a common recreational activity at Roosevelt Lake. The lake is home to a variety of game fish including crappie, carp, sunfish, flathead and channel catfish, and smallmouth bass and largemouth bass. There was a slot size limit of between 13 and 16 inches for the bass, and only one can be taken per day.

Until recently, Lake Roosevelt also hosted the state's most significant population of the federally endangered southwestern willow flycatcher. Since the lake's rise following heavy rains in the winter of 2005, the population dynamics between this site and the other significant Arizona population (on the San Pedro River) are unclear.

There are several Arizona Trail trailheads in the vicinity. The 800 mile (1,280 km) long hiking trail extending from the Arizona- Mexico border to Utah crosses the Salt River on the State Route 188 bridge that crosses Theodore Roosevelt Lake just northeast of Roosevelt Dam.

The Lake is home to the Grapevine Airstrip, a small general aviation recreational airstrip located a quarter mile from the shore. The airstrip hosts numerous fly-ins a year. [5]