The reservoir is mainly in southwest Wyoming and partially in northeastern Utah. The northern tip of the reservoir is 10 miles (16 km) southeast of Green River, Wyoming, 14 mi (23 km) southwest of Rock Springs, Wyoming, and the Southern tip is approximately 40 miles (64 km) north of Vernal, Utah. The lake straddles the Utah-Wyoming border. The nearby town of Dutch John, Utah, was built to serve as a base camp during construction of the dam, and as an administrative site afterwards.[ citation needed] 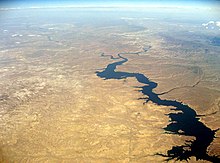 The foundation of the reservoir is a steep-sided narrow canyon composed of siliceous sandstone and hard quartzites inter-bedded with softer shales, siltstones, and argillites. About 1.5 miles (2.4 km) east of the dam, a road cut has revealed a fault scarp on the southbound side with about 9 feet (3 m) of slippage.

Visitors enjoy hiking, boating, fishing, windsurfing, camping, backpacking, cross-country skiing, and snowmobiling within Flaming Gorge National Recreation Area, which is operated by Ashley National Forest. Camp sites can be found close to the dam and along Highway 191 for a fee, as well as free throughout the area. Campgrounds operated by the U.S. Forest Service close in the winter months, with the exception of Dripping Springs near Dutch John. There are also public camp sites at Buck Board and Lucerne Marinas, along Highway 530 on the west side of the reservoir. The many available fish species in the reservoir and surrounding lakes are Colorado River Cutthroat trout, Brown trout, Rainbow trout , Lake trout, Kokanee salmon, Smallmouth bass, Burbot and Common carp. The Green River is a popular spot for fishing, mainly below the dam. The river's ice cold water and beautiful structure make it a world class, world-renowned fly fishing stream.

A panorama of Flaming Gorge Reservoir taken from the observation platform on Highway 191 during the summer.
Retrieved from " https://en.wikipedia.org/?title=Flaming_Gorge_Reservoir&oldid=956207898"
Categories:
Hidden categories: