From Wikipedia, the free encyclopedia
"USBR" redirects here. For the network of long-distance cycling routes, see United States Bicycle Route System.
Not to be confused with Office of Surface Mining, Reclamation, and Enforcement.
Government agency

The United States Bureau of Reclamation (USBR), and formerly the United States Reclamation Service, is a federal agency under the U.S. Department of the Interior, which oversees water resource management, specifically as it applies to the oversight and operation of the diversion, delivery, and storage projects that it has built throughout the western United States for irrigation, water supply, and attendant hydroelectric power generation. Currently the USBR is the largest wholesaler of water in the country, bringing water to more than 31 million people, and providing one in five Western farmers with irrigation water for 10 million acres of farmland, which produce 60% of the nation's vegetables and 25% of its fruits and nuts. The USBR is also the second largest producer of hydroelectric power in the western United States. [3]

From 1902 to 1907, Reclamation began about 30 projects in Western states. [4] Then, in 1907, the Secretary of the Interior separated the Reclamation Service from the USGS and created an independent bureau within the Department of the Interior. Frederick Haynes Newell was appointed the first director of the new bureau. Beginning with the third person to take over the direction of Reclamation in 1923, David W. Davis, the Title was changes from Director to Commissioner [5].

In the early years, many projects encountered problems: lands or soils included in projects were unsuitable for irrigation; land speculation sometimes resulted in poor settlement patterns; proposed repayment schedules could not be met by irrigators who had high land-preparation and facilities-construction costs; settlers were inexperienced in irrigation farming; waterlogging of irrigable lands required expensive drainage projects; and projects were built in areas which could only grow low-value crops. In 1923 the agency was renamed the "Bureau of Reclamation". [6] In 1924, however, in the face of increasing settler unrest and financial woes, the "Fact Finder's Report" spotlighted major problematic issues; the Fact Finders Act in late 1924 sought to resolve some of these problems.[ citation needed]

In 1928 Congress authorized the Boulder Canyon ( Hoover Dam) Project, and large appropriations began, for the first time, to flow to Reclamation from the general funds of the United States. The authorization came only after a hard-fought debate about the pros and cons of public power versus private power.[ clarification needed] [7]

The heyday of Reclamation construction of water facilities occurred during the Depression and the 35 years after World War II. From 1941 to 1947, Civilian Public Service labor was used to carry on projects otherwise interrupted by the war effort. The last major authorization for construction projects occurred in the late 1960s, while a parallel evolution and development of the American environmental movement began to result in strong opposition to water development projects. Even the 1976 failure of Teton Dam as it filled for the first time did not diminish Reclamation's strong international reputation in water development circles. [8] However, this first and only failure of a major Reclamation Bureau dam led to subsequent strengthening of its dam-safety program to avoid similar problems. Even so, the failure of Teton Dam, the environmental movement, and the announcement of President Carter's "hit list" on water projects profoundly affected the direction of Reclamation's programs and activities. [9]

Reclamation operates about 180 projects in the 17 western states. The total Reclamation investment for completed project facilities in September 1992 was about $11 billion. Reclamation projects provide agricultural, household, and industrial water to about one‑third of the population of the American West. About 5% of the land area of the West is irrigated, and Reclamation provides water to about one-fifth of that area, some 9,120,000 acres (37,000 km²) in 1992. Reclamation is a major American generator of electricity. As of 2007 [update], Reclamation had 58 power plants on‑line and generated 125,000 GJ of electricity.

From 1988 to 1994, Reclamation underwent major reorganization as construction on projects authorized in the 1960s and earlier drew to an end. Reclamation wrote that "The arid West essentially has been reclaimed. The major rivers have been harnessed and facilities are in place or are being completed to meet the most pressing current water demands and those of the immediate future". Emphasis in Reclamation programs shifted from construction to operation and maintenance of existing facilities. Reclamation's redefined official mission is to "manage, develop, and protect water and related resources in an environmentally and economically sound manner in the interest of the American public". In redirecting its programs and responsibilities, Reclamation substantially reduced its staff levels and budgets but remains a significant federal agency in the West.[ citation needed] 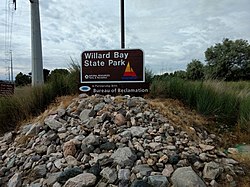 Reclamation commissioners that have had a strong impact and molding of the Bureau have included Elwood Mead, Michael W. Straus, and Floyd Dominy, with the latter two being public-power boosters who ran the Bureau during its heyday. Mead guided the bureau during the development, planning, and construction of the Hoover Dam, the United States' first multiple-purpose dam. [10]

John W. Keys, the 16th Commissioner of the Bureau of Reclamation who served from July 2001 to April 2006, was killed two years after his retirement on May 30, 2008, when the airplane he was piloting crashed in Canyonlands National Park, Utah. [11]