From Wikipedia, the free encyclopedia
Regional wholesaler of water in Southern California

The Metropolitan Water District of Southern California is a regional wholesaler and the largest supplier of treated water in the United States. The name is usually shortened to "Met," "Metropolitan," or "MWD." It is a cooperative of fourteen cities, eleven municipal water districts, and one county water authority, that provides water to 19 million people in a 5,200-square-mile (13,000 km2) service area. It was created by an act of the California Legislature in 1928, primarily to build and operate the Colorado River Aqueduct. Metropolitan became the first (and largest) contractor to the State Water Project in 1960.

Metropolitan owns and operates an extensive range of capital facilities including the Colorado River Aqueduct which runs from an intake at Lake Havasu on the California-Arizona border to its endpoint at the Lake Mathews reservoir in Riverside County. It also imports water supplies from northern California via the 444-mile (715 km) California Aqueduct as a contractor to the State Water Project. In 1960, Metropolitan became the first (and largest) contractor to the State Water Project. Metropolitan's extensive water system includes three major reservoirs, six smaller reservoirs, 830 miles (1,340 km) of large-scale pipes, about 400 connections to member agencies, 16 hydroelectric facilities and five water treatment plants.

The Metropolitan headquarters is in downtown Los Angeles, adjacent to historic Union Station. 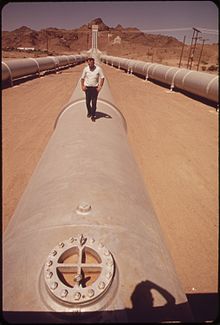 The Metropolitan story dates back to the early 20th century, as Southern California cities were faced with a growing population and shrinking local groundwater supplies. The Metropolitan Water District of Southern California was established in 1928 under an act of the California Legislature to build and operate the 242-mile Colorado River Aqueduct (389 km) that would bring water to southern coastal areas. Southland residents voted for a major bond in the depths of the Great Depression to fund the construction effort through the desert to deliver essential water supplies and generate badly needed jobs.[ citation needed]

In 1960, Metropolitan, along with 30 other public agencies, signed a long-term contract that made possible the construction of the State Water Project, including reservoirs, pumping plants and the 444-mile California Aqueduct (715 km), which currently serves urban and agricultural agencies from the San Francisco Bay to Southern California. As the largest of the now 29 agencies, Metropolitan contracts with the state Department of Water Resources, which owns and operates the State Water Project, for slightly less than half of all supplies delivered to Metropolitan.[ citation needed]

Metropolitan is governed by a board of 38 directors whose powers and functions are specified in the 1927 authorization act. This board was in charge of issuing bonds and financing their repayment by selling water to member agencies. In the early years, revenue from water sales was too low, so Metropolitan also collected taxes that ranged from 0.25 to 0.50 percent of assessed value. Ninety percent of the cost of the aqueduct has been paid for by the taxpayers. In 1929 the district was set up with an area of 600 square miles (1,600 km2) and served a population of around 1,600,000 in 13 cities. [1]

The San Diego County Water Authority joined Metropolitan as its first wholesale member agency in 1946. SDCWA was formed in 1944 to facilitate joining Metropolitan, received its first deliveries in 1947 and was buying half of Metropolitan's water by 1949. The SDCWA annexation broke two traditions at Metropolitan: Member agencies had previously been cities (SDCWA was a water wholesaler) in the south coast basin (SDCWA was south of the basin). The next "break" came in 1950, when Pomona MWD (now Three Valleys MWD) joined Metropolitan. Since Pomona was a largely agricultural member agency at the time, Metropolitan was no longer selling water only for "domestic use". [3]:13, 28–32 (The territory served by the Pomona district urbanized rapidly, with agriculture having disappeared almost entirely by 1970.)

Metropolitan's additional supplies and easier rules of entry facilitated an expansion through annexation of large areas of low populations: The eight MWDs that joined from 1946 to 1955 added 200 percent to Metropolitan's service area but only 75 percent to Metropolitan's population served. [3]:32 By 1965, Metropolitan had 13 cities and 13 municipal water districts as members. It covered more than 4,500 square miles (12,000 km2) in the counties of Los Angeles, Ventura, Orange, San Diego, Riverside, and San Bernardino—and served some 10,000,000 people.[ citation needed] 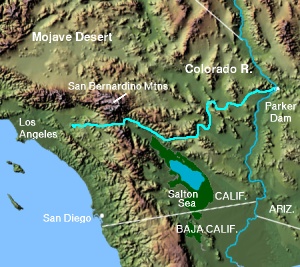 The State Water Project moves water from the western Sierra Nevada through the Sacramento-San Joaquin River Delta before delivering supplies—via the California Aqueduct to Southern California. Once in the south coastal plain, deliveries are split between the SWP's West Branch, storing water in Castaic Lake for delivery to the west side of the Los Angeles metropolitan area, and the East Branch, which delivers water to the Inland Empire and the south and east parts of the Los Angeles Basin.

Metropolitan contracts for about 2 MAF/Y (million acre feet per year) from the State Water Project (SWP) and 1.35 MAF/Y from the Colorado River Aqueduct (CRA), but actual delivery amounts depend on a conditions including hydrology, infrastructure and regulatory conditions . Between 1984 and 2004 the actual deliveries were 0.7 MAF/Y from the SWP and 1.2 MAF/Y from the CRA. The SWP allotment is rarely met, if at all, due to restrictions on the amount of water that can be pumped from the Delta. A minimum freshwater flow has to pass through the Delta in order to prevent salinity intrusion from San Francisco Bay, and the removal of freshwater from the Delta has also threatened multiple species, such as native chinook salmon. [3] [5]

The Inland Feeder project [6] added a direct tunnel and pipeline connection from Silverwood Lake to Diamond Valley Lake and was completed in 2010.

The Metropolitan Water District of Southern California reservoirs store fresh water for use in Los Angeles, Orange, Ventura, Riverside, San Bernardino, and San Diego counties. These reservoirs were built specifically to preserve water during times of drought, and are in place for emergencies uses such as earthquake, floods or other events. 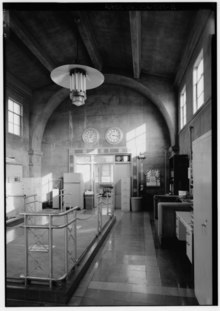 They collectively filter water for more than 19 million Southern Californians. [13] Metropolitan employs over 2,100 people to maintain and do research at these facilities,[ citation needed] including scientists specializing in chemistry, microbiology, and limnology (the study of lakes and rivers).

Metropolitan's water treatment plants each use a conventional 5-step treatment process as follows: [14]

Following the conventional treatment process, chlorine and ammonia are added to the water to form chloramines and maintain a disinfectant residual in the distribution system. Sodium hydroxide is added as a corrosion control measure to adjust the pH level and protect pipes and plumbing fixtures. Also, fluoride is added to help prevent dental caries in children as recommended by the U.S. Department of Health and Human Services.

In 2019 the Metropolitan Water District played a crucial role in the development of the Colorado River Drought Contingency Plan (DCP). The Drought Contingency Plan aims to implement legislation to reduce the risk of declining levels in the Colorado River reservoirs, particularly by incentivizing agencies to store additional water in Lake Powell and Lake Mead [15]. In 2018, the Imperial Water District elected to not execute the DCP and the Metropolitan Water District agreed to provide the full portion of water storage contributions to Lake Mead [16]. By the end of 2020, MWD will have nearly stored 1 million acre-feet in Lake Mead and contributing to 12 feet of Lake Mead's elevation [16].

In partnership with the Sanitation Districts of Los Angeles County and the Metropolitan Water District, The Regional Recycled Water Program will introduce purified and treated wastewater that will replenish groundwater basins across Los Angeles and Orange Counties that aims to potentially accommodate direct potable reuse demands in the near future [17]. The program includes 60 miles of new pipelines to convey the treated water across four regional groundwater basins, an industrial facility, and two MWD treatment plants.

The program calls for a water treatment facility that would be the one of the largest in the nation, producing 150 million gallons per day or 168 thousand acre-feet per year of purified water [18]. However, before the full-scale facility is developed, a 0.5 million gallon per day demonstration facility, The Advanced Purification Center, in Carson will take its place and vigorously test, treat, and operate to ensure the highest quality standards of wastewater treatment are met prior to the development of the new facility [18]. The construction and application of a membrane bioreactors in the demonstration facility cost nearly $17 million dollars and the total cost of building the full-scale program will be $3.4 billion, resulting in an annual operation cost of $129 million, and water cost of $1,830 per acre-foot [18]. The full scale treatment facility would serve 500,000 homes daily and deliver a purified source of water to the four regional groundwater basins: Central, West Coast, Main San Gabriel, and Orange County [16] . 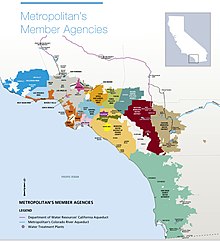