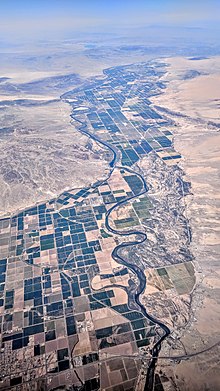 Aerial view looking north along the Palo Verde Valley and into the Parker Valley, where the Colorado River defines the border between California (left) and Arizona (right). A portion of the city of Blythe, California, and Ehrenberg, Arizona, and Interstate Highway 10 are visible at the bottom.

The region is the ancestral home of several Native American tribes: the Quechan, the Chemehuevi and Matxalycadom or Halchidhoma, [2] [3] some who have Indian reservations in California and Arizona along the Colorado and Gila Rivers today.

Agriculture is the valley's most important industry since indigenous farming. Crops include melons, alfalfa, cotton and vegetables. [4] The Palo Verde Irrigation District (PVID), with its water sourced from the Palo Verde Diversion Dam, controls the canal system for these fields. Dating back to Thomas Henry Blythe's filing in 1877, the PVID has the most senior Colorado River water rights of any California agency. [5]

In a 2005 agreement, Metropolitan Water District of Southern California (MWD) negotiated with PVID in Blythe to fallow, or idle, farm land for 35 years. The deal will transfer water that would have been used for farming in the area of Blythe, Ripley and Palo Verde to MWD.

According to a 1990 pilot study, water diversions and fallowed farm land reduced farming employment. The MWD provided $6 million in a development fund to reimburse the community for losses caused by shifting water to urban areas. [7]

California currently uses more than its allotted share of water from the Colorado River. The transfer agreement also seeks to address over-use of river water. It is partly designed to reduce overall diversions from the river.

The Blythe Airport is west of the valley. [9]

Rail transportation by the Arizona and California Railroad served the valley until 2007.