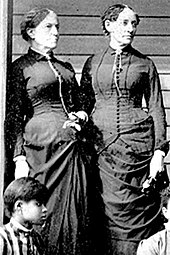 The Atlanta Baptist Female Seminary was established on April 11, 1881 (1881-04-11) in the basement of Friendship Baptist Church in Atlanta, Georgia, by two teachers from the Oread Institute of Worcester, Massachusetts: Harriet E. Giles and Sophia B. Packard. [2] [9] Giles and Packard had met while Giles was a student, and Packard the preceptress, of the New Salem Academy in New Salem, Massachusetts, and fostered a lifelong friendship there. [10] The two of them traveled to Atlanta specifically to found a school for black freedwomen, and found support from Frank Quarles, the pastor of Friendship Baptist Church.

Giles and Packard began the school with 11 African-American women and $100 given to them by the First Baptist Church in Medford, Massachusetts., [2] and a promise of further support from the Women's American Baptist Home Missionary Society (WABHMS), a group with which they were both affiliated in Boston. [10] Although their first students were mostly illiterate, they envisioned their school to be a liberal arts institution – the first circular of the college stated that they planned to offer "algebra, physiology, essays, Latin, rhetoric, geometry, political economy, mental philosophy (psychology), chemistry, botany, Constitution of the United States, astronomy, zoology, geology, moral philosophy, and evidences of Christianity". [10] Over time, they attracted more students; by the time the first term ended, they had enrolled 80 students in the seminary. [10] The WABHMS made a down payment on a nine-acre (36,000 m2) site in Atlanta relatively close to the church they began in, which originally had five buildings left from a Union Civil War encampment, to support classroom and residence hall needs. [11]

In 1882 the two women returned to Massachusetts to bid for more money and were introduced to wealthy Northern Baptist businessman John D. Rockefeller at a church conference in Ohio. [2] Rockefeller was impressed by Packard's vision. In April 1884, Rockefeller visited the school. By this time, the seminary had 600 students and 16 faculty members. It was surviving on generous donations by the black community in Atlanta, the efforts of volunteer teachers, and gifts of supplies; many Atlanta black churches, philanthropists, and black community groups raised and donated money to settle the debt on the property that had been acquired. [10] Rockefeller was so impressed that he settled the debt on the property. [11] Rockefeller's wife, Laura Spelman Rockefeller; [2] her sister, Lucy Spelman; and their parents, Harvey Buel and Lucy Henry Spelman, were also supportive of the school. The Spelmans were longtime activists in the abolitionist movement. In 1884 the name of the school was changed to the Spelman Seminary in honor of Laura Spelman and her parents. Rockefeller also donated the funds for what is currently the oldest building on campus, Rockefeller Hall, which was constructed in 1886.

Packard was appointed as Spelman's first president in 1888, after the charter for the seminary was granted. Packard died in 1891, and Giles assumed the presidency until her death in 1909.

The years 1910 to 1953 saw great growth and transition for the seminary. [12] Upon Giles' death, Lucy Hale Tapley became president. Although the college was a stride in and of itself, at the time, neither the founders nor the current administration had interest in challenging the status quo of young women as primarily responsible for the family and the home. [10] Tapley declared: "Any course of study which fails to cultivate a taste and fitness for practical and efficient work in some part of the field of the world's needs is unpopular at Spelman and finds no place in our curriculum." [12] The nursing curriculum was strengthened; a teachers' dormitory and a home economics building were constructed, and Tapley Hall, the science building, was completed in 1925. [12] The Granddaughters' Club, a club for students whose mothers and aunts had attended Spelman was also created, and this club is still in existence today.

In 1927, one of the most important buildings on campus, Sisters Chapel, was dedicated. The chapel was named for its primary benefactors, sisters Laura Spelman Rockefeller and Lucy Maria Spelman. The college had also begun to see an improvement in extracurricular investment in the arts, with the organization of the Spelman College Glee Club in 1925, [14] inauguration of the much-loved Atlanta tradition of the annual Spelman-Morehouse Christmas Carol Concert and smaller events such as the spring orchestra and chorus concert, the Atlanta University Summer Theater, and the University Players, a drama organization for AUC students. The school also began to see more of a focus on collegiate education, as it discontinued its elementary and high school divisions. In 1930 the Spelman Nursery School was created as a training center for mothers and a practice arena for students who planned careers in education and child development. Spelman celebrated its 50th anniversary in April 1931. This milestone as accompanied by the construction of a university library that was shared amongst the Atlanta University Center institutions, and the center continues to share a library to this day.

The school continued to expand, building and acquiring more property to accommodate the growing student body. IN 1947, Spelman joined the list of "approved institutions" of the Association of American Universities. [15] In 1953, Florence Read retired, and Albert E. Manley became the first black and first male president of college. Under his presidency and the presidency of his successor, Donald Stewart, Spelman saw significant growth. The college established its study abroad program, the Merrill Foreign Travel-Study Program. [13] Stewart's administration tripled the college's endowment and oversaw the establishment of the Comprehensive Writing Program, an across-the-curriculum writing program that requires students to submit portfolios of their written work; the Ethel Waddell Githii College Honors Program; and the Women's Research and Resource Center. [13] In 1958, the college received accreditation from the Southern Association of Colleges and Schools.

Going into the 1960s, the Spelman College students became involved in the heated civil rights actions going on in Atlanta. In 1962, the first Spelman students were arrested for participating in sit-ins in the Atlanta community. Noted American historian Howard Zinn was a professor of history at Spelman during this era, and served as an adviser to the Student Nonviolent Coordinating Committee chapter at the college. Zinn mentored many of Spelman's students fighting for civil rights at the time, including Alice Walker and Marian Wright Edelman [16] Zinn was dismissed from the college in 1963 for supporting Spelman students in their efforts to fight segregation; at the time, Spelman was focused on turning out "refined young ladies." Edelman herself writes that Spelman had a reputation as "a tea-pouring, very strict school designed to turn black girls into refined ladies and teachers." [17]

Stewart retired in 1986, and the following year, Johnnetta Betsch Cole became the first black female president of Spelman College. During this time, the college became noted for its commitment to community service and its ties to the local community. Cole also led the college's most successful capital campaign; between 1986 and 1996, the college raised $113.8 million, including a $20 million gift from Bill Cosby and his wife, Camille Hanks Cosby, whose daughter graduated from Spelman. [13] In honor of this gift, the Cosby Academic Center was constructed. [18] In July 2015 the remainder of the funds were returned and an endowed professorship named for the Cosby couple discontinued as allegations of sexual assault by Bill Cosby grew more prominent. [19] [20]

In 1997, Cole stepped down and Audrey Forbes Manley became Spelman's first alumna president. After her retirement, in 2002, Beverly Daniel Tatum, the college's president until 2015, took the post. The campus now comprises 26 buildings on 39 acres (160,000 m2) in Atlanta. [3]

In 2012, Oprah Winfrey served as the keynote commencement speaker. [21]

In 2015, Spelman opened the Wellness Center at Reed Hall, a state-of-the-art recreation center. It is host to a multitude of services from an indoor track and cycling room to a teaching kitchen and a multitude of fitness and wellness programs. [22]

In March 2015, Mary Schmidt Campbell was named the 10th president of Spelman College. [23] She began her presidency August 2015.

In 2017, Spelman's leadership voted to allow transgender women to enroll in the institution. [24]

In 2018, Spelman received $30 million from Spelman trustee Ronda Stryker for the construction of a new state-of-the-art building on campus. Stryker's gift is the third largest single donation from a living donor to a HBCU and second largest in Spelman history. [25] [26]

In June 2020, philanthropists Reed Hastings and his wife Patty Quillin donated $40 million to Spelman College to be used as scholarship funds for students enrolled at Spelman. Their single donation is the largest in the history of Spelman and HBCUs. [27] In July 2020, Spelman received a notably large undisclosed donation from philanthropist MacKenzie Scott. [28] 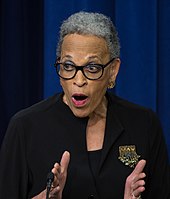 Since its inception Spelman has had ten presidents:

The Spelman College Museum of Fine Art is the only museum in the United States that emphasizes art by and about women of the African Diaspora. [29] Some Black Women artists the museum has featured include Amy Sherald, Mickalene Thomas, and Reneé Stout. [30] Each semester, the museum features a new exhibit; past exhibits have included artists Beverly Buchanan (2017) [31] and Zanele Muholi.

In 2016, the museum collaborated with Spelman's Department of Art and Art History to start a two-year curatorial studies program to increase diversity in the museum industry. [32]

Spelman is ranked tied for 54th best among national liberal arts colleges and 1st among historically black colleges in the United States by U.S. News & World Report for 2021; additionally, it ranked Spelman 4th in "Social Mobility", 10th "Most Innovative", tied for 19th "Best Undergraduate Teaching", and 100th for "Best Value" among liberal arts colleges. [37] Spelman leads the nation in enrolling the highest percentage of Gates Millennium Scholars. [38] [39] Spelman is also ranked among the top 50 four-year colleges and universities for producing Fulbright and Gilman Scholars, and was ranked the second-largest producer of African-American college graduates who attend medical school. [40] [41] [42] Spelman ranks first among baccalaureate origin institutions of African-American women who earned science, engineering, and mathematics doctoral degrees. [43] [44] The Princeton Review ranked Spelman among the Best 373 Colleges and Universities in America in 2017. [45]

Spelman offers bachelor's degrees in over 30 academic majors. In addition, Spelman has strategic partnerships with over 30 different universities to help students more efficiently complete degree programs not offered on campus in healthcare, law, and engineering. [46] [47]

Students are all women and predominantly African-American. [3] Approximately 30% come from Georgia, 69% from the rest of the United States, and 1% are international. 85% of Spelman students receive financial aid, the average financial package for a first year student adds up to $22,000. [57]

Spelman's gated campus near downtown Atlanta consists of over 25 buildings on 39 acres.

All new Spelman students are required to attend a six-day new student orientation (NSO) in August immediately before the fall semester begins. The orientation includes events, workshops, and sessions designed to teach new Spelmanites about the mission, history, culture, traditions, and sisterhood of Spelman College; students are also given information on how to successfully matriculate to Spelman Women (graduates), such as registration, advisement, placement, and planning class schedules. Orientation is led by student leaders known as PALs (Peer Assistant Leaders) and Spelman alumnae. During orientation, new students are required to remain on campus at all times; any leave must be approved by PALs. [58]

One of Spelman's oldest traditions are Spelmanites wearing "respectable and conservative" white dresses to designated formal events on campus. The tradition began in the early 1900s when it was customary for women to wear such dresses when attending formal events. White attire is worn to the annual NSO induction ceremony, Founders Day Convocation, Alumnae March, and graduating seniors wear white attire underneath their graduation gowns for Class Day and Commencement. [59] 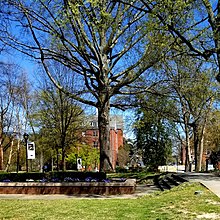