Historically black colleges and universities (HBCUs) are institutions of higher education in the United States that were established before the Civil Rights Act of 1964 with the intention of primarily serving the African-American community. Most of these institutions were founded in the years after the American Civil War and are concentrated in the Southern United States. [1] During the period of segregation in the United States prior to the Civil Rights Act, the overwhelming majority of higher education institutions were predominantly white and completely disqualified or limited African-American enrollment. [2] [3] For a century after the end of slavery in the United States in 1865, most colleges and universities in the Southern United States prohibited all African Americans from attending, while institutions in other parts of the country regularly employed quotas to limit admissions of blacks. [4] [5] [6] [7] 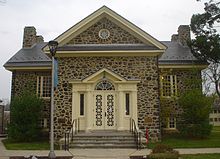 Cheyney University founded in 1837 is the oldest HBCU.

Exactly three months after the end of the Civil War, Atlanta University – now Clark Atlanta University – was founded on September 19, 1865, as the first HBCU in the Southern United States. Atlanta University was the nation's first graduate institution to award degrees to African Americans in the nation and the first to award bachelors degrees to African Americans in the South; Clark College (1869) was the nation's first four-year liberal arts college to serve African-American students. The two consolidated in 1988 to form Clark Atlanta University. [13] Shaw University, founded December 1, 1865, was the second HBCU to be established in the South. The year 1865 also saw the foundation of Storer College (1865–1955) in Harper's Ferry, West Virginia. Storer's former campus and buildings have since been incorporated into Harpers Ferry National Historical Park.[ citation needed] [14]

In the 1920s and 1930s, historically Black colleges developed a strong interest in athletics. Sports were expanding rapidly at state universities, but very few black stars were recruited there. Race newspapers hailed athletic success as a demonstration of racial progress. Black schools hired coaches, recruited and featured stellar athletes, and set up their own leagues. [16] [17]

In the 1930s, many Jewish intellectuals fleeing Europe after the rise of Hitler and anti-Jewish legislation in prewar Nazi Germany following Hitler's elevation to power emigrated to the United States and found work teaching in historically black colleges. [18] [19] In particular, 1933 was a challenging year for many Jewish academics who tried to escape increasingly oppressive Nazi policies, [20] particularly after legislation was passed stripping them of their positions at universities. [20] Jews looking outside of Germany could not find work in other European countries because of calamities like the Spanish Civil War and general antisemitism in Europe. [21] [20] In the US, they hoped to continue their academic careers, but barring a scant few, found little acceptance in elite institutions in Depression-era America, which also had their own undercurrent of antisemitism. [19] [22]

As a result of these phenomena, more than two-thirds of the faculty hired at many HBCUs from 1933 to 1945 had come to the United States to escape from Nazi Germany. [23] HBCUs believed the Jewish professors were valuable faculty that would help strengthen their institutions' credibility. [24]HBCUs had a firm belief in diversity and giving opportunity no matter the race, religion, or country of origin. [25] HBCUs were open to Jews because of their ideas of equal learning spaces. They sought to create an environment where all people felt welcome to study, including women. [25]

Claus-Dieter Korn got his first teaching job at Howard University. [26] His testimony was published in a paper editorial in the New York Times in 1994. [26] He says," Thus I got my first teaching job at Howard University through Ralph Bunche, then chairman of political science at Howard. Similarly, at his recommendation, a young fellow political scientist, Ossip Flechtheim, obtained his first academic employment at Atlanta University." [26]

Ernst Borinski moved to Jackson, Mississippi, during the Holocaust to begin a job as a professor at Tougaloo College. [21] Borinski was a judge and a lawyer when he left Germany and hoped to find refuge in an HBCU due to their acceptance of those who were not yet considered white in the United States. [21] He eventually became a leading sociologist at Tougaloo College and is remembered for his impact on creating a well-integrated community for academics from all backgrounds.

Ernst Manasse [ de] was a philosopher and close friend of Ernst Borinski who also got a job at an HBCU. [21] His first position in the United States was at North Carolina Central University. [21]

HBCUs made great contributions to the US war effort. One example is Tuskegee University in Alabama, where the Tuskegee Airmen trained and attended classes. [27] [28]

After the landmark Brown v. Board of Education decision of 1954, the legislature of Florida, with support from various counties, started a series of eleven junior colleges serving the African-American population. The purpose was to show that separate but equal education was working in Florida. Prior to this, there had been only one junior college in Florida serving African Americans, Booker T. Washington Junior College, in Pensacola. The new ones, with their year of founding, are

The new junior colleges began as extensions of black high schools; they used the same facilities and often the same faculty. Some built their own buildings after a few years. After passage of the Civil Rights Act of 1964 mandating an end to school segregation, the colleges were all abruptly closed. Only a fraction of the students and faculty were able to transfer to the previously all-white junior colleges, where they found, at best, an indifferent reception. [29]

A reauthorization of the Higher Education Act of 1965 established a program for direct federal grants to HBCUs, to support their academic, financial, and administrative capabilities. [30] [31] Part B specifically provides for formula-based grants, calculated based on each institution's Pell grant eligible enrollment, graduation rate, and percentage of graduates who continue post baccalaureate education in fields where African Americans are underrepresented. Some colleges with a predominantly black student body are not classified as HBCUs because they were founded (or opened their doors to African Americans) after the implementation of the Sweatt v. Painter (1950) and Brown v. Board of Education (1954) rulings by the U.S. Supreme Court (the court decisions which outlawed racial segregation of public education facilities) and the Higher Education Act of 1965.

In 1980, Jimmy Carter signed an executive order to distribute adequate resources and funds to strengthen the nation's public and private HBCUs. His executive order created the White House Initiative on historically black colleges and universities (WHIHBCU), which is a federally funded program that operates within the U.S. Department of Education. [32] In 1989, George H. W. Bush continued Carter's pioneering spirit by signing Executive Order 12677, which created the presidential advisory board on HBCUs, to counsel the government and the secretary on the future development of these organizations. [33]

Starting in 2001, directors of libraries of several HBCUs began discussions about ways to pool their resources and work collaboratively. In 2003, this partnership was formalized as the HBCU Library Alliance, "a consortium that supports the collaboration of information professionals dedicated to providing an array of resources designed to strengthen historically black colleges and Universities and their constituents." [34]

In 2015, the Bipartisan Congressional Historically Black Colleges and Universities (HBCU) Caucus was established by U.S. Representatives Alma S. Adams and Bradley Byrne. The caucus advocates for HBCUs on Capitol Hill. [35] As of September 2019, there are 94 elected politicians as members of the caucus. [36]

Every year, the U.S. Department of Education deems one week in the fall as "National HBCU Week". During this week, several conferences and events are held in Washington, D.C. discussing and celebrating HBCUs, as well as recognize select scholars and alumni from the HBCU community. [37]

North Carolina A&T State University is the largest HBCU in the nation.

Although HBCUs were originally founded to educate black students, their diversity has increased over time. In 2015, students who were either white, Hispanic, Asian or Pacific Islander, or Native American made up 22% of total enrollment at HBCUs, compared with 15% in 1976. [42]

In 2006, the National Center for Education Statistics released a study showing that HBCUs had a $10.2 billion positive impact on the nation's economy with 35% coming from the multiplier effect. [44]

Following the enactment of Civil Rights laws in the 1960s, many educational institutions in the United States that receive federal funding have undertaken affirmative action to increase their racial diversity. Some historically black colleges and universities now have non-black majorities, including West Virginia State University and Bluefield State College, whose student bodies have had large white majorities since the mid-1960s. [8] [45] [46]

HBCU libraries have formed the HBCU Library Alliance. That alliance, together with Cornell University, have a joint program to digitize HBCU collections. The project is funded by the Andrew W. Mellon Foundation. [64]

NCAA Division I has two historically black athletic conferences: Mid-Eastern Athletic Conference and Southwestern Athletic Conference. The top football teams from the conferences have played each other in postseason bowl games: the Pelican Bowl (1970s), the Heritage Bowl (1990s), and the Celebration Bowl (2010s). These conferences are home to all Division I HBCUs except for Hampton University and Tennessee State University. Tennessee State has been a member of the Ohio Valley Conference since 1986, while Hampton left the MEAC in 2018 for the Big South Conference. In 2021, North Carolina A&T State University will make the same conference move that Hampton made three years earlier (MEAC to Big South).[ citation needed]

See also the "Notable alumni" sections of each institution's article.

HBCUs have a rich legacy of matriculating many leaders in the fields of business, law, science, education, military service, entertainment, art, and sports. This list of alumni includes people such as Martin Luther King Jr., who began his studies at Morehouse College, following in the footsteps of his father, Martin Luther King, Sr.. Oprah Winfrey attended Tennessee State University to pursue a broadcasting career. W. E. B. Du Bois, relying on money donated by neighbors, attended Fisk University, from 1885 to 1888. After Dubois earned his doctorate, he became a professor of history, sociology, and economics at Clark Atlanta University, between 1897 and 1910. [66] Althea Gibson entered Florida A&M University on a full athletic scholarship. Michael Strahan played one season of high school football, which was enough for him to get a scholarship offer from Texas Southern University. Thurgood Marshall attended Frederick Douglass High School in Baltimore and was placed in classes with the best students. He later went on to graduate from Lincoln University, in Pennsylvania and Howard University School of Law. In 1933, he graduated first in his law class at Howard. Roscoe Lee Browne also attended Lincoln University, in Pennsylvania, where he graduated with a bachelor's degree, in 1946. Browne also occasionally returned to Lincoln, between 1946–52, to teach English, French and comparative literature. Spike Lee enrolled in Morehouse College, where he made his first student film, Last Hustle in Brooklyn. He took film courses at Clark Atlanta University and graduated with a BA in mass communication from Morehouse. Kamala Harris, the first black senator from California received her bachelor's degree from Howard University. Rod Paige earned a bachelor's degree from Jackson State University in Jackson, Mississippi. Anika Noni Rose attended Florida A&M University where she earned a bachelor's degree in theater. The Tuskegee Airmen were educated at Tuskegee University. Douglas Wilder received his bachelor's degree from Virginia Union University and his law degree from Howard University School of Law. Astronaut Dr. Ronald McNair graduated from North Carolina A&T State University. NASA mathematician Katherine Johnson and Leon H. Sullivan, developer of the Sullivan Principles used to end apartheid in South Africa, attended West Virginia State College (now West Virginia State University). Ruth Simmons is a Dillard University graduate who became the first black president of an Ivy League institution (Brown University).

Government funding has increased in recent years, with the Obama administration setting a six-year record in 2016 by expanding support to HBCUs by $17 million under the Higher Education Act. [67] According to U.S. Department of Education records, the Trump administration has provided the most funding to historically black colleges and universities in the nation's history for both undergraduate and graduate studies, with in excess of US$360 million recorded in 2018. [68]