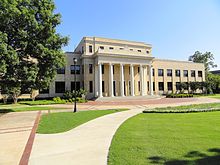 Austin College is a private liberal arts college affiliated with the Presbyterian Church (USA) and located in Sherman, Texas. [5]

About 1,300 students are enrolled at the college. [6] Students are required to live on campus for the first three years of their education in order to foster a close-knit and community oriented campus lifestyle. Austin College actively promotes study abroad programs; 70% of graduates have at least one international study experience during college, and about 82% of students are involved in research. [7] The college cultivates close interaction between students and professors via a 13:1 [8] student to faculty ratio and an average class size of fewer than 25 students. [9]

Chartered in November 1849, Austin College remains the oldest institution of higher education in Texas to be operating under its original charter and name as recognized by the State Historical Survey Committee. [5] The college was profiled in all three editions of Colleges That Change Lives.

The college was founded on October 13, 1849, in Huntsville, Texas, by the Hampden–Sydney [10] and Princeton-educated missionary Dr. Daniel Baker. Signed by Texas Governor George Wood, the charter of Austin College was modeled after those of Harvard, Yale, and Princeton. [11]

Baker named the school for the Texas historical figure Stephen F. Austin after the original land on which it was built was donated by the Austin family. Two other important figures in Texas history, Sam Houston and Anson Jones, [5] served on the original board of trustees for the college, and the former site in Huntsville later became today's Sam Houston State University.

Austin College's founding president was Irish-born Presbyterian minister Samuel McKinney, who served as the school's president a second time from 1862 to 1871. [12] Under the tenure of the fourth president of Austin College, Reverend Samuel Magoffin Luckett, [13] Austin College suffered several yellow fever epidemics and complications related to the Civil War. Texas Synod of the Presbyterian Church decided the college would be relocated to Sherman in 1876. Construction of the new campus in north Texas came in the form of "Old Main," a two-story, red brick structure, which occurred between 1876 and 1878. Struggling with the Long Depression. Austin College saw little improvement to its building or grounds during the late 1870s; as such, Samuel Luckett resigned his position as president. From 1878 to 1885, the college continued to struggle from the aftershocks of economic depression; with an increasing debt and shrinking student body, the college turned to its 7th president, Reverend Donald MacGregor. A shrewd and well connected businessman, President MacGregor relieved a great deal of the college's debt and returned operations to normalcy. After MacGregor's death in 1887, the college welcomed President Luckett back to the campus. Throughout his second term as president, Samuel Luckett adopted a military program, grew the student body, introduced a YMCA chapter, established intercollegiate athletics and Greek fraternities, and added two wings to Old Main.

One of the school's most iconic presidents came in the form of Reverend Thomas Stone Clyce, who served as the Austin College president from 1900 to 1931; Reverend Clyce's presidency would become, and remains, the longest tenure in Austin College history.

On January 21 of 1913, Old Main was set ablaze and burnt to the ground in a matter of hours. A professor of Austin College, Davis Foute Eagleton described the incident:

"Austin College on fire and every particle of wood reduced to ashes--and walls rendered totally unfit for use. Oh, dies irae, dies irae! - The dear old building in which I have laboured for twenty-four years, gone! What traditions, memories, griefs, joys, were associated with it! The carpenters were approaching the completion of their work. The new English room was completed, the library room was soon to be ready. The literary societies lost everything. I lost all books, or, [those] in my class room. The laboratories were almost a total loss. Fortunately, the library, records, and office furniture were all in the new Y.M.C.A. building. Before the fire had begun to die out, the Senior class called the student body together and they pledged themselves by classes in writing to stand by the Faculty and the College, and that no one would leave. The Faculty also met shortly after and unanimously decided to continue college work the next day as usual, meeting their classes in places designated. Probably not another institution in the State could have done this. But the old College building is gone forever!!!" [14]

Following the fire, the citizens of Sherman raised $50,000 to help the college rebuild. Now one of the oldest buildings on the Austin College campus, Sherman Hall housed administrative offices, an auditorium-chapel, and a library. Now the home of the humanities division, Sherman Hall boasted such guests as Harry Houdini, Harry Blackstone Sr., Madame Schumann-Heink, William Howard Taft, and George H.W. Bush.

To this day, the Austin College administration rarely cancels classes for weather or minor incidents in honor of the great commitment students and faculty made to continue on with regular coursework following the fire.

Austin College became co-educational in 1918, merging in 1930 with the all-female Texas Presbyterian College.

The Great Depression severely limited campus growth and educational expansion, however the college quickly regained momentum in the mid-1930s with the introduction of many courses, ground breaking on new facilities, and growth of previously established programs. Throughout 1942, Austin College trained some 300 men and women in engineering, science and management courses as part of the United States Office of Education's war efforts. The following year, Austin College undertook a Cadet nurses training program and hosted Naval Reserves, Texas Home Guard, Army-air trainees and Air Corps Cadets.

On September 20, 1973, the musician Jim Croce died in a plane crash in Natchitoches, Louisiana, on his way to perform the next night at Austin College. Six people died in the crash.

In 1994, Dr. Oscar Page joined the community as its 14th president. Under his tenure, 1994-2009, Dr. Page increased the school's endowment by nearly 80%, due in large part to his dedicated fundraising efforts as evidenced by the success of the "Campaign for the New Era;" a total of $120 million were raised and the campaign was heralded as the largest fundraiser in Austin College's history. Dr. Page orchestrated the construction of Jordan Family Language House, Jerry E. Apple Stadium, the Robert J. and Mary Wright Campus Center, the Robert M. and Joyce A. Johnson 'Roo Suites, and the Betsy Dennis Forster Art Studio Complex; as well as the renovation of the David E. and Cassie L. Temple Center for Teaching and Learning at Thompson House and of Wortham Center, and creation of the John A. and Katherine G. Jackson Technology Center, the Margaret Binkley Collins and William W. Collins, Jr., Alumni Center, and the College Green in Honor of John D. and Sara Bernice Moseley and Distinguished Faculty. [13]

In the latter part of Austin College's history, the school would see de-segregation, welcome its first full-time black faculty member, first female head of a department, and, employ its first female president.

Dr. Marjorie Hass joined the campus in 2009 as both its first female and Jewish faith president. Under her leadership, the college saw the construction of the IDEA Center and two new housing complexes—the Flats at Brockett Court and the Village on Grand. The IDEA Center is a 103,000 square ft. facility which includes multi-disciplinary and multi-purpose classrooms, laboratories, lecture halls and the largest telescope in the region found in Adams Observatory. It is a LEED Gold certified facility. [15]

Austin College offers about 35 majors and pre-professional programs for study, and students can also create a specialized major to match their academic interests. The college is known for its nationally recognized five-year Master of Arts in Teaching program, its pre-medical, international studies, and pre-law programs, which draw many students to the campus. The college has a music program, [20] and supports the Austin College A Cappella Choir and the Sherman Symphony Orchestra [21] made up of students and local musicians, and assorted smaller musical ensembles. It sponsors the Posey Center of Excellence in Leadership, the Center for Environmental Studies, and the Center for Southwestern and Mexican Studies, three specialized programs that give students numerous research and internship opportunities. The school also has active programs in over 40 academic disciplines. The school's student newspaper, the Austin College Observer, is a bi-weekly publication.

Austin College participates in NCAA Division III athletics. Previously, Austin College competed in NAIA Division II athletics. Austin College athletes do not receive athletic scholarships. The football team became known as the "Kangaroos" sometime during the 1914 to 1915 seasons. According to campus legend, the mascot name was derived from a kangaroo court of organized students that would paddle violators of college rules. Currently students refer to their sports teams as the 'fighting roos.'

Austin College joined the Southern Collegiate Athletic Conference (SCAC) on July 1, 2006, replacing Rose-Hulman Institute of Technology. Austin College was previously a member of the American Southwest Conference (ASC), Texas Intercollegiate Athletic Association, and Texas Conference. In 2017, the Austin College football team joined the Southern Athletic Association in football, while remaining a member of the SCAC across all other sports. [22] The college started fielding varsity men's and women's water polo during the 2018-19 school year; the men participate in the Mountain Pacific Sports Federation (MPSF) while the women compete in Collegiate Water Polo Association (CWPA) Division III.

In 2007, the first year of participating in the SCAC, the Austin College baseball team won the conference tournament, beating Millsaps College 9-7 in the finals. The Roos finished the season with a win-loss record of 22-25. The tournament win was the first ever conference championship for the Roos and the first time the program had ever been in the Regional tournament. [23] Carl Iwasaki was the head coach for the Roos from 2005 until 2010. He won two coach of the year awards, the first in 2006 while the Roos were still in the ASC and the second, coming in 2007 after the Roos had joined the SCAC. Coach Iwasaki was replaced by James Rise for the 2011 season who coached for four seasons. Under Rise, the Roos went 11-24 in 2011, 8-29 in 2012, 12-29 in 2013, and 6-33 in 2014. [24] In the fall of 2014, the Roos hired Mike Ramsey, a former TCU baseball player, who in his first year went 8-21.

Austin College began its first football season in 1896, making Austin College one of the first teams in the south. Austin College has had 119 straight seasons with a football team. Since its beginning Austin college has won eight conference championships, and one national championship. It has also hosted over 130 all Americans. Currently the football team is coached by Loren Dawson and is currently a member of NCAA Division III Southern Collegiate Athletic Conference (SCAC). As noted above, the football team moved to the Southern Athletic Association (SAA) in 2017.