From Wikipedia, the free encyclopedia
This article is about the U.S. university. For the university in the Philippines, see Southwestern University (Philippines).
Not to be confused with Southwestern Law School.

Southwestern University (Southwestern or SU) is a private university in Georgetown, Texas. Formed in 1873 from a revival of collegiate charters granted in 1840, Southwestern is the oldest university in Texas. Southwestern offers 40 bachelor's degrees in the arts, sciences, fine arts, and music as well as interdisciplinary and pre-professional programs. The university is accredited by the Southern Association of Colleges and Schools and the National Association of Schools of Music. It is historically affiliated with the United Methodist Church.

The university is a member of the Annapolis Group, the Associated Colleges of the South, the Council of Independent Colleges, and is a signatory of the Talloires Declaration. 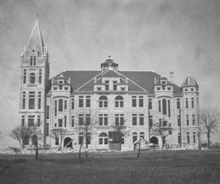 The Roy and Lillie Cullen Building shortly after completion 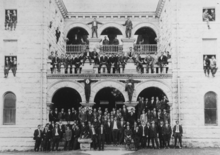 Students in front of Mood-Bridwell Hall in 1910

In 1873, the union of these four institutions opened in Georgetown as Texas University. [4] Wishing to reserve that name for a proposed state university in Austin, the University of Texas, the Texas Legislature instead granted a charter in 1875 under the name Southwestern University as a continuation of the charters for Rutersville, Wesleyan, McKenzie, and Soule. The university considers its founding date to be 1840 when Rutersville College opened. Southwestern thus claims to be the oldest university in Texas and the second oldest coeducational liberal arts college west of the Mississippi.

Southwestern was a charter member of the Southwest Conference in 1915. Southern Methodist University was Southwestern's main rival for several decades in remembrance of an unsuccessful attempt to relocate Southwestern to Dallas which instead resulted in the establishment of SMU. When SMU's student population became much larger, students at Southwestern began considering Trinity University and Austin College to be the school's main rivals. After World War II, Southwestern transformed itself into a small liberal arts institution, discontinuing its post-graduate degrees, disbanding the football team, and rebuilding much of the campus with a massive capital campaign. The endowment rose substantially.

The university offers 40 majors and 36 minors divided between the Brown College of Arts, Garey School of Natural Sciences, and the Sarofim School of Fine Arts. In addition to traditional academic majors, Southwestern offers interdisciplinary, independent, and paired majors as well as pre-professional programs in Engineering, Law, Medicine, and Theology. [10] [11]

In the 2013-2014 school year, total student enrollment was at 1,536, with a gender distribution of about 60 percent female and 40 percent male. Of the entering first-year students in Fall 2013, 37 percent were in the top 10 percent of their high school graduating class with an average SAT score of 1166 (*writing section not included). While the majority of students come from Texas (89 percent), the remaining 11 percent come from 23 other states and 6 countries. Minority students constitute 33 percent of the student body. [12]

The student to faculty ratio is 11:1, with an average class size of 15 students. Ninety-nine percent of the tenured or tenure-track faculty hold a doctorate or highest degree in their fields. Collaborative research and publication with students is common. [12]

Southwestern hosts two interdisciplinary academic exhibitions each year to showcase research by students at Southwestern and researchers across the country. The Brown Symposium held in the early spring is an academic conference attracting guest lecturers and panelists. All Brown Symposium speakers present research that shares the symposium's theme for that year. [13] The Creative Works Symposium held near the end of the spring semester offers undergraduate students an opportunity to display their own research as a formal oral presentation, panel discussion, poster presentation, art exhibit, or technology demonstration. These student presentations are often the culmination of senior capstone projects, independent studies, collaborations with a faculty member, or a requirement for receiving research grants. [14]

Loren Pope, former education editor for The New York Times, included Southwestern in his 1996 book, Colleges That Change Lives, and in a 2012 update to that book. [18]

Southwestern University is located in Georgetown, Texas, about 30 miles (50 km) north of Austin. The campus comprises 700 acres (2.8 km²) mostly located north of University Avenue, although the eastern portion of these lands remains largely undeveloped with some portions serving as an EcoLab where faculty and students conduct research. The main campus is organized around a central academic mall formed by a semi-circular grassy area bounded by a pedestrian walkway and academic buildings. Residence halls and on-campus apartments are located to the east and northwest of the academic mall. Sports fields, support facilities, and parking are on the periphery of the main campus. 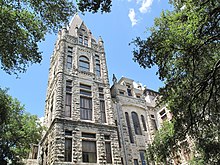 The Hugh Roy and Lillie Cullen Building in 2009 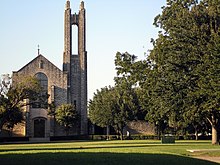 The Lois Perkins Chapel situated along the Academic Mall

The Hugh Roy and Lillie Cullen Building (formerly called the Administration Building) was built in 1898 in the Richardsonian Romanesque style and is listed on the National Register of Historic Places. The Cullen Building currently houses the administration, business office, alumni relations, and classrooms. Throughout various times in its history, it has also housed the campus auditorium, gymnasium, chapel, and library. It is named in honor of Hugh Roy Cullen and his wife.

Mood-Bridwell Hall, originally a men's dormitory, was completed in 1908 and currently houses classrooms, faculty offices, a computer lab, the Debbie Ellis Writing Center, and an indoor atrium. Mood-Bridwell is included in the Cullen Building's listing on the National Register of Historic Places.

The A. Frank Smith Library Center opened in 1939 as the Cody Memorial Library and was built as part of a WPA project. It was expanded in 1966 and again in 1989, receiving the new name as a result of the second expansion. In addition to books and periodicals, the library houses a film and audio collection, 24-hour computer lab, maps, sheet music, and special collections for Texas history and culture, John Tower, J. Frank Dobie, Jessie Daniel Ames, Herman Melville, Aaron Burr, Edward Blake, Thomas Bewick, and Australia. [19]

The Lois Perkins Chapel was built in 1950 and includes an Aeolian-Skinner pipe organ. Stained glass windows along the east and west sides depict Reformation leaders and Methodist leaders with seals for the educational institutions they were affiliated with.

The Fayez Sarofim School of Fine Arts is housed in the Alma Thomas Fine Arts Building, originally built in 1956 on the former property of the Texas rancher John Wesley Snyder, a Southwestern University benefactor. [20] The Fine Arts Building (FAB) has been renovated multiple times, most recently in 1998 and 2008. The FAB houses the 700-seat Alma Thomas Theater, the smaller Jones Theater, the Caldwell-Carvey Foyer, numerous practice rooms, art studios, a black box theater, and an instrumental rehearsal hall.

The Wilhelmina Cullen Admission Center opened in 2009, moving the admissions office out of the Roy and Lillie Cullen Building. It is Southwestern's first "green" building and was designed to receive Gold LEED certification. Some of the building's features include a bamboo floor in the lobby area, skylights in the center of the building, solar-powered sink faucets and reflective roof shingles. Southwestern plans to turn the area in the original Cullen Building formerly occupied by the Admission Office into a museum. The Admissions Center was named after Wilhelmina Cullen, the daughter of Roy and Lillie Cullen.

Student government is primarily handled by the Student Congress, with each member elected to represent students living in residence halls, Greek houses, and at-large for students living off-campus. The Student Congress is headed by a president elected through popular vote. An independent organization, Student Foundation, serves as a liaison between students, faculty, alumni, and the university's administration. A panel of students and faculty maintain the university's honor code, replacing the Student Judiciary which previously adjudicated violations of the honor code.

Southwestern hosts eight national social fraternities and sororities governed by the North-American Interfraternity Council (IFC) and the National Panhellenic Council (NPC). [21] All fraternities occupy houses on the western side of the campus. The sororities do not have dedicated housing, although they maintain chapter rooms in the Lord Caskey Center. Southwestern has a deferred rush allowing incoming students to become familiar with the campus before formal recruitment begins in the early spring. About 1/3 of the student life is involved in Greek life. [22]

The Megaphone, established in 1907, is the official student newspaper of Southwestern University. Published online and biweekly in print, the newspaper focuses on the campus community, including sections on news, features, opinions/editorials, culture, and sports. Throughout its history, the Megaphone has changed formats several times, alternating between broadsheets and tabloid paper. The newspaper publishes an April Fool's Day edition every spring under the title The Megaphool.

Spyglass Literary Magazine is the student literary magazine. The magazine is the oldest publication on campus, established in 1882 as the Alamo and San Jacinto Monthly and renamed the Southwestern University Monthly in 1895, then the SU Literary Magazine, and finally The Spyglass in 2012. Currently published twice a year at the end of each semester, the magazine features student poetry, short stories, artwork, and photography.

The men's lacrosse team became a varsity sport in 2009 after offering lacrosse as a club sport for 25 years. The men's lacrosse team won the Lonestar Alliance Division II Championship for four consecutive years prior to becoming a varsity sport. [24] The women's team is currently non-varsity and is affiliated with the Texas Women's Lacrosse League, although the university plans to field a varsity team in 2014. [25] The women's team won a division championships in 2007.

In addition to lacrosse, Southwestern has a nationally ranked handball team that won the Division II National Collegiate Championship in 2007. In September 2016, Southwestern's volleyball team moved up to 3rd place in the AVCA coaches poll as well. [26]

Southwestern reinstated football in 2013 after a 62-year hiatus. [25] The university previously fielded football teams from 1908 to 1951, reaching national prominence during World War II when the university's participation in the Navy's V-12 College Training Program enlisted talented players from other schools. [27] Southwestern was a founding member of the Southwest Conference and won the Sun Bowl in 1944 and 1945. [28]