Saint Louis School, located in the neighborhood of Kaimuki in Honolulu, Hawaii, is a historic Roman Catholic college preparatory school for boys. It was founded in 1846 to serve the needs of early Hawaiian Catholics in the former Kingdom of Hawaii. Located within the Roman Catholic Diocese of Honolulu, it is affiliated with the Society of Mary, a religious order of brothers and priests called the Marianists who also administer Chaminade University of Honolulu, formerly the college section of Saint Louis School. It is located near Sacred Hearts Academy, a girls' school founded by the Congregation of the Sacred Hearts of Jesus and Mary, and both schools hold joint programs such as cultural festivals and the JROTC. [2] [3] 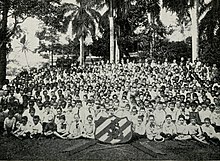 Saint Louis School was originally located in the ʻĀhuimanu area of windward Oʻahu as the College of ʻĀhuimanu, founded in 1846 by the Fathers of the Congregation of the Sacred Hearts of Jesus and Mary. In 1881, the school was relocated to Beretania Street, in downtown Honolulu, adjacent to Washington Place, the home of Liliuokalani, who was Queen of Hawaii from 1891 to 1893. When the school moved to downtown Honolulu, it was called the College of Saint Louis, named after the patron saint of Louis Maigret, Bishop of Honolulu. In 1883, the school moved again for a third time to Kamakela (known today as College Walk), on the bank of the Nuʻuanu Stream, near Chinatown, Honolulu. This remained the campus until the 1920s. [5]

The high school and college sections eventually split up and the emblem for Saint Louis College can be seen above the door of the administration building of Chaminade University on the Chaminade/Saint Louis campus. Marianists assumed control of the school and determined a need to expand facilities to serve the burgeoning Hawaiian Catholic population, who included many Filipino immigrants. Because of the Marianist core mission to educate regardless of ethnic, religious, or fiscal means, the Order purchased land in Kalaepōhaku, a hillside division of Honolulu's Kaimuki community, to enable the school to better serve Hawaii. Kalaepōhaku opened in September 1928 as Saint Louis School.

In the years following World War II, Saint Louis School re-evaluated its mission. Beginning in 1949, it dropped the lower grade levels one at a time, concentrating on a curriculum as a high school serving grades 9 through 12.

Saint Louis School plays competitively in the Interscholastic League of Honolulu (ILH) and the Hawai'i High School Athletic Association (HHSAA). Sometimes it fields members in the Pac-5, an alliance of Honolulu-area private academies.

As the state has no professional sports teams, high school teams in Hawaii are extremely popular with the public. Several generations of Hawaiian residents have become avid fans of Saint Louis School athletics, especially its football team. The Honolulu Advertiser and Honolulu Star-Bulletin newspapers have nicknamed Saint Louis School's team as Hawaii's Team; it has played in invitational tournaments throughout the world.[ citation needed]

Notable alumni include a large number of politicians, military personnel, and athletes, but few other professions: