President Theodore Roosevelt High School is a public, co-educational college preparatory high school in Honolulu, Hawai'i. It is operated by the Hawaiʻi State Department of Education and serves grades nine through 12. Roosevelt High School is accredited by the Western Association of Schools and Colleges. Roosevelt was ranked as the top high school in Hawaii in 2019 by US News and World Report (see State and National Ranking, below). 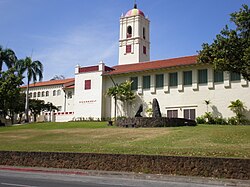 The school avoided destruction when on March 4, 1942, the Imperial Japanese Navy attempted to bomb Pearl Harbor a second time. Weather caused one of the two floatplane bombers to drop its bombs 980 feet from the school.

Roosevelt High School is most famous for its buildings and landmark domed bell tower constructed in Spanish mission architectural style, currently being restored through grants of the Hawaiʻi State Legislature. Its buildings were used as backdrops in several movie and television productions. Adjacent to the historic bell-towered building is the 2001 Hawaiian basalt sculpture "Hoʻokahi" (To Make as One), by Mark Watson.

In January 2014, a police officer shot a knife-wielding runaway teen who was being detained for trespassing and became disruptive at the school. [3]

Roosevelt High School is located in urban Honolulu, Hawaiʻi. It is situated in Makiki's Kalāwahine Valley adjacent to the National Memorial Cemetery of the Pacific overlooking downtown Honolulu and Ala Moana.

There were 1427 students attending Roosevelt High School in the 2012-2013 school year. As of then, the racial composition was as follows: [2]

Roosevelt High School is part of the Hawaii Department of Education Kaimuki-McKinley-Roosevelt Complex Area along with Kaimuki High School and McKinley High School.

The Roosevelt Complex consists of 12 elementary, middle, and public charter schools including Roosevelt.

The orchestra program consists of the Chamber Strings and the Symphony Orchestra.

Roosevelt's Arts and Communication Academy officially began operations in 2002 and in 2004 graduated its first class. Known for involving language, art, humanities, and history in a humanistic approach, the academy is active with the Hawaii Opera Theater and brings students to cultural centers such as Paris, Barcelona, and Madrid. Recently they are also expanding their school trips to Asia, particularly Japan. This academy is usually in charge of hosting Japanese students on their visits to Hawaii to study how schools there operate.