The university is broadly organized into four colleges, and its parent organization, the Church Educational System (CES), sponsors sister schools in Utah and Idaho. Approximately 97 percent of the university's 2,800 students are members of the LDS Church. [4] BYU-Hawaii students are required to follow an honor code, which requires behavior in line with LDS teachings (e.g., academic honesty, adherence to dress and grooming standards, and abstinence from extramarital sex and from the consumption of drugs and alcohol). A BYU-Hawaii education is less expensive than similar private universities since a large portion of tuition is funded by LDS Church tithing funds. [5]

The university partners with the LDS Church-owned Polynesian Cultural Center, the largest living museum in the State of Hawaii, which employs roughly one third of the student body. 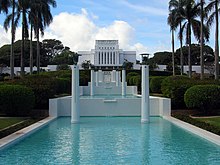 The building of the LDS Church's Laie Hawaii Temple was a key predecessor to the establishment of BYU–Hawaii.

The LDS Church was established in the islands in 1850 following the Edict of Toleration promulgated by Kamehameha III, giving the underground Hawai‘i Catholic Church the right to worship, while at the same time allowing other faith traditions to begin establishing themselves.[ citation needed] By 1919, the church was prominent enough in the area to build a temple in Laie. Two years after the temple was dedicated then- LDS Church apostle David O. McKay stated the church would build a school in the area in the future. In 1951, McKay, as church president, began preliminary plans on the school, and in 1954 ground was broken for the new institution. [6] Classes began at BYU-Hawaii in September 1955 as the Church College of Hawaii to accommodate the burgeoning LDS population in the Territory of Hawai‘i. This was largely a result of McKay's views on both education and strengthening the church outside of its longtime intermountain west U.S. base. The original class consisted of 153 students and 20 faculty meeting in old World War II buildings, with Reuben D. Law as the school's first president. The school's first buildings were dedicated on December 17, 1958. The college was at first a two-year college but was reorganized in 1959 to become a four-year college. By 1961 the college had been granted four-year accreditation by the Western Association of Schools and Colleges. Dormitories, a cafeteria, and other buildings had also been constructed. [6]

LDS elders established the Polynesian Cultural Center in November 1963 as a means of preserving the Pacific cultures that the Latter-day Saints had encountered in their missionary work. In the 1970s, the school was also used to teach LDS missionaries pacific languages and cultures before going out to the islands. The center also provided jobs for students of the college. In 1974, the Church College of Hawaii was elevated to the rank of university by the Church Board of Education and renamed.

BYU-Hawaii is located in Laie on the north shore of Oahu, about 35 miles (56 km) north of Honolulu. The campus covers 100 acres (0.40 km2; 0.16 sq mi) between the mountains and the ocean shore. Dormitories, known as 'Hales', located on the south end of campus are capable of providing room and board for over 1,200 students. The Temple View Apartments provide housing for married students. [9] These apartments are next to the Laie Hawaii Temple which is located directly adjacent to the campus. The school's library is the two-story Joseph F. Smith Library. [10]

LDS students pay less for tuition than non-LDS students. Students who have been on LDS missions and have attended LDS seminary or institute classes are also given particular consideration. However, LDS Church membership is not a requirement for attendance. Students are typically expected to have had at least a B average in high school, and an ACT score of 26 or SAT score of 1130 or above. Non-native English speakers must receive a 61 or higher on the IBT TOEFL (500 on the paper test), a 5.5 on IELTS, or 75+ on the Michigan language test. [11]

On March 28, 2014, the university announced that the athletics program would be phased out over the next three years, with money spent on athletics to be used to provide educational opportunities for an additional 500 students. The transition impacted all eleven (11) intercollegiate teams, including: men's/women's basketball, men's/women's cross country, men's golf, men's/women's soccer, softball, men's/women's tennis, and women's volleyball. [17] Athletics at BYU-Hawaii ended following the spring sports in 2017.

According to BYU-Hawaii's vision outlined by then-LDS Church president David O. McKay in 1955, the school "exists to assist individuals in their quest for perfection and eternal life and in their efforts to influence the establishment of peace internationally." [18]

All students are required to take religion classes as part of their curriculum and to attend Sunday church meetings, both LDS and non-LDS. In addition, class schedules are arranged to allow devotionals to be held weekly for the students to attend. Students from all walks of life are encouraged to learn from and strengthen each other as they all strive to further their education. A variety of clubs and campus organizations are available to participate in.

A sign reminds students of the BYU-Hawaii Honor Code standards

All students and faculty, regardless of religion, are required to agree to adhere to an honor code, officially known as the CES Honor Code, but often referred to as the BYU Honor Code. Early forms of the BYU Honor Code are found as far back as the days of the Brigham Young Academy and educator Karl G. Maeser. Maeser created the "Domestic Organization," which was a group of teachers who would visit students at their homes to see that they were following the schools moral rules prohibiting premarital sex, obscenity, profanity, smoking, and alcohol consumption.

The Honor Code itself was created in 1940 at BYU and was used mainly for cases of cheating and academic dishonesty. Ernest L. Wilkinson expanded the Honor Code in 1957 to include other school standards. (At this time, Wilkinson, as President of BYU, had some authority over BYU–Hawaii as well.) This led to the Honor Code today: rules regarding chastity, dress, grooming, drugs and alcohol. A signed commitment to live the honor code is part of the application process and must be adhered by all students, faculty, and staff. Students and faculty found in violation of standards are either warned or called to meet with representatives of the Honor Council. In rare cases, students and faculty can be expelled from the school or lose tenure. [19] One significant difference between the versions of the Honor Code used at the main BYU campus and BYU–Hawaii is specific prohibition of the drinking of kava by BYU-Hawaii students and faculty. Kava is a traditional Polynesian drink with some drug-like side-effects. [20]