The Honolulu Star-Bulletin was a daily newspaper based in Honolulu, Hawaii, United States. At the time publication ceased on June 6, 2010, it was the second largest daily newspaper in the state of Hawaiʻi (after the Honolulu Advertiser). The Honolulu Star-Bulletin, along with a sister publication called MidWeek, was owned by Black Press of Victoria, British Columbia, Canada and administered by a council of local Hawaii investors. The daily merged with the Advertiser on June 7, 2010, to form the Honolulu Star-Advertiser, after Black Press's attempts to find a buyer fell through.

The Honolulu Star-Bulletin traces its roots to the Feb. 1, 1882, founding of the Evening Bulletin by J. W. Robertson and Company. In 1912, it merged with the Hawaiian Star to become the Honolulu Star-Bulletin. Wallace Rider Farrington, who later became territorial governor of Hawaii, was the editor of the newspaper from 1898 and the president and publisher from 1912 until his death. His son Joseph Rider Farrington succeeded him and served as president and publisher until his own death in 1954. From 1962 it was owned by a local group of investors led by Elizabeth P. Farrington and operated under a joint operating agreement with the Honolulu Advertiser that allowed the two papers to use the same printing facilities and sales personnel (the Hawaii Newspaper Agency) while maintaining separate fully competitive editorial staffs and providing Honolulu with two distinct editorial "voices."

On September 16, 1999, Liberty Newspapers announced that it planned to close the Honolulu Star-Bulletin the following month. [3] The decision was met with fierce resistance in the community and lawsuits were filed against Liberty and Gannett by the state and by concerned citizens' groups. The shutdown was postponed with an injunction by a federal district judge two weeks before the scheduled date of closure.

In April 2000, Liberty Newspapers offered the Honolulu Star-Bulletin for sale. The action once again threatened the closure of the publication, but in November of that year, Canadian publishing magnate David Black announced his intent to purchase the Honolulu Star-Bulletin. When the purchase was finalized in 2001, the joint operating agreement came to an end and Black moved the paper's administration and editorial offices to new headquarters in Restaurant Row near Honolulu Harbor. The newspaper was printed in Kaneohe, on the presses of the Star-Bulletin's sister publication, MidWeek. [4] (Black had purchased MidWeek shortly before the Star-Bulletin deal was closed—and at a time when no one in the local business community was aware that it was for sale.)

On April 13, 2009, The Star-Bulletin made the conversion from a broadsheet to a tabloid format in an effort to retain its readership base, [5] even though the move resulted in the layoff of 17 editorial staffers (about 20% of its unionized workforce). This was done to save costs. However, the format did not help as it continued to lose both money and readership. At the same time, Gannett was looking into selling the Advertiser as the company decided that it did not fit in with Gannett's long-term strategy. This move would lead to Black Press pursuing a deal that would result in buying the Advertiser, a more profitable paper with a daily circulation of 115,000, even though the Star-Bulletin itself was losing money and had a daily circulation of 37,000. 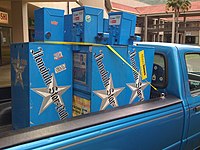 On February 25, 2010, Black Press purchased only the "physical assets" of The Honolulu Advertiser. As part of the deal to acquire the Advertiser, Black Press agreed to place the Star-Bulletin on the selling block. [6] If no buyer came forward by March 29, 2010, Black Press would start making preparations to operate both papers through a transitional management team and then combine the two dailies into one. [7]

On March 30, 2010, three parties came forward with offers to buy the Star-Bulletin, but a month later on April 27, 2010, the bids were rejected because their bid for the Star-Bulletin was below the minimum, liquidation price, resulting in Black Press cancelling any sale and proceeding with transition plans, which came on the same day that they were approved to take over the Advertiser by the Department of Justice. [8] [9]

On May 3, 2010, a new company set by Black Press, HA Management, took over the operations of Advertiser while also overseeing the Star-Bulletin during a 30- to 60-day transition period, in which both papers merged into one daily, The Honolulu Star-Advertiser. The merger took place on June 7, 2010. Existing Advertiser employment ceased. The Star-Bulletin published its final issue as a tabloid on June 6, 2010 before returning to a broadsheet paper under the merger. [10] [11] [12] 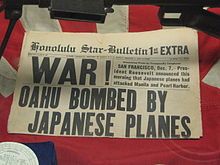