From Wikipedia, the free encyclopedia
Highway in Hawaii

Interstate H-3 (abbreviated H-3) is an intrastate Interstate Highway located on the island of O'ahu in the state of Hawaii in the United States. H-3 is also known as the John A. Burns Freeway. It crosses the Ko'olau Range along a viaduct and through the 5,165-foot-long (1,574 m) Tetsuo Harano Tunnels as well as the much smaller Hospital Rock Tunnels.

Despite the number, signage is that of an east–west highway. Its western terminus is at an intersection of Interstate H-1 at Halawa near Pearl Harbor. Its eastern end is at the main gate of Marine Corps Base Hawaii (MCBH). This route satisfies the national defense purpose of connecting the Marine Corps base with the U.S. Navy port at Pearl Harbor off Interstate H-1.

Orders for the freeway were granted in 1960, followed by planning stages. Construction, amid enormous community protest, was begun in the late 1980s, although the road did not open until December 12, 1997. Environmental complaints and legal challenges halted construction at many points. Construction resumed during the late 1980s after a move by U.S. Senator Daniel Inouye, who in 1986 had the freeway exempted from most environmental laws [2] as a rider on a Department of Defense budget bill. [3] [4]

H-3 was one of the most expensive Interstate Highways ever built, on a cost-per-mile basis. Its final cost was $1.3 billion, or approximately $80 million per mile. [5] 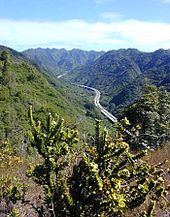 Interstate H-3 in Halawa Valley looking towards the Ko'olau crest 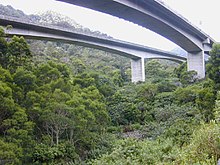 Viaducts of H-3 within Halawa Valley

Since its inception in the early 1960s, the H-3 Freeway has been mired in controversy. The original route was not set to be in the current Halawa valley, but rather, the nearest major valley due east, in the Moanalua ahupuaʻa. The powerful Damon family hurried to create the Moanalua Gardens Foundation in 1970 to join the forces of all political and cultural groups who opposed the freeway's construction through their tract of land.[ citation needed] The Foundation's pinnacle no-build argument was the need to remove a significant historical stone containing ancient petroglyphs, Pohaku ka Luahine, which, to this day, stands intact along the Moanalua valley trail. Success came their way as this freeway route was dropped, but the H-3 would merely be rerouted.

Kanaka Maoli (Native Hawaiian) cultural practitioners continue to call for the highway's removal since it runs through an area of extreme cultural significance, according to their interpretation. The Bishop Museum, which did the historical and archaeological research, has published extensive reports that generally ascribe lower cultural significance to these sites relative to other sites in Hawaii. [6] [7] Many contend that the freeway is "cursed" due to its destruction of religious sites, [8] [9] and is therefore harmful even to those who traverse it. [10] [11] Ongoing environmental concerns include weed encroachment, light pollution, asbestos pollution, water and streamlife problems, and a host of other concerns; among these are the ongoing decline of native owls called pueo, and other native birds. For example, the Oʻahu ʻalauahio (Paroreomyza maculata), whose last known home was Halawa, has had no sightings since H-3 construction was completed. [6] [12]

Some longtime residents of Koolaupoko and other East Shore communities continue to object to the freeway's developmental impacts on their communities. Among their primary fears are urbanization on the scale of Honolulu via the freeway, which has the potential to bring heavy traffic and growth into their traditionally quiet neighborhoods, as well as affecting the value of their homes in the relatively rural (until recently) communities.

Conversely, this road is considered an engineering wonder by its admirers. It is often compared to various cinematic landscapes in Star Wars and other movies, and it does sometimes reduce travel time for cross-island commuters, which has allowed for increased real estate development and prices in Windward Oʻahu. 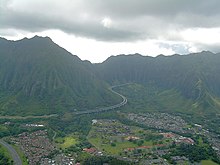 One anecdote relates to the elevated section passing through Haʻikū Valley. In this valley, the viaduct passed beneath the antenna of a United States Coast Guard radio transmission facility. It was thought that the energy field from the antenna could interfere with heart pacemakers—a potential detriment to drivers and passengers on the roadway. A giant metal cage was designed to surround the roadway through the valley. Before H-3 was opened, the U.S. Coast Guard closed their transmitting facility, obviating the need for the cage. Although the full cage was never built, buried within the roadway was the bottom of the cage. HDOT decided to not construct this steel mesh prior to opening of the freeway.

In September 2020, a section of the H-3 Freeway is planned to close for two days to serve as a COVID-19 surge testing site for up to 10,000 people. The freeway was selected to allow for long queuing lanes leading up to testing stations at the Kaneohe and Halawa tunnel portals. [13]