From Wikipedia, the free encyclopedia
Interstate in southern Arizona

Interstate 19 (I-19) is a north–south Interstate Highway located entirely within the U.S. state of Arizona. I-19 travels from Nogales, roughly 300 feet (91 m) from the Mexican border, to Tucson, at I-10. The highway also travels through the cities of Rio Rico, Green Valley, and Sahuarita.

In Nogales, the southern terminus of I-19 is at West Crawford Street, adjacent to the international port of entry, and southbound travelers can continue into Nogales, Sonora, Mexico, via state-maintained surface roads, and connect with Mexico Federal Highway 15 either to the south or west of Nogales, Sonora. [3]

Starting from the southern terminus at kilometer post 0 ( not mile post 0), I-19 initially heads briefly south then west on surface streets, navigating its way through the town of Nogales for 0.2 miles (0.32 km) before becoming an Interstate–grade freeway and making the turn to head north toward Tucson. It has interchanges with two other state highways near the southern end of the route, State Route 189 (SR 189) at exit 4 and SR 289 at exit 12. The interchange with SR 189 at exit 4 both serves to funnel traffic so as to bypass around Nogales, Arizona, and Nogales, Sonora, for travelers bound to or from Hermosillo or Mexico City, and provides for the continuous flow of freight and truck traffic through the larger Mariposa Port of Entry to Highway 15, which has its northern terminus at the US–Mexico border with SR 189 and its southern terminus 2,179 kilometers (1,354 mi) away in Mexico City. [4] After exiting Nogales to the north, I-19 passes near and around a series of sparsely-populated towns and retirement communities along the banks of the Santa Cruz River, including Rio Rico, Tubac, Amado, Green Valley, and Sahuarita. For several miles near Amado and Green Valley, the eastward view from I-19 provides scenic views of Madera Canyon and the Santa Rita Mountains in the Coronado National Forest. [3] 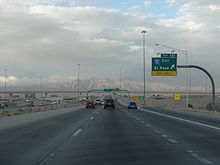 I-19 northbound at the I-10 interchange; the downtown Tucson skyline can be seen on the left.

Just before entering Tucson, I-19 passes through the eastern section of the San Xavier Indian Reservation where it makes its only crossing of the Santa Cruz River. As I-19 enters the Tucson city limits, it has an interchange with SR 86 at exit 99 before reaching its northern terminus at an interchange with I-10. [3]

Nearly the entire route of I-19 follows, or is adjacent to, the former routing of U.S. Route 89 (US 19) and the Santa Cruz River, which flows northward from Mexico, through Tucson and usually disperses into the desert between Marana and the Gila River, southeast of Phoenix. Most of the time, much of the river is dry, but heavy storms can cause it to overflow its banks, flooding farmland before reaching the Gila River. 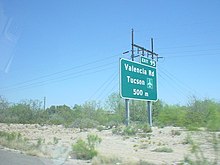 Metric-unit advance guide sign on I-19, installed as part of the Valencia Road interchange renovation

I-19 is unique among US Interstates, because signed distances are given in meters (hundreds or thousands as distance-to-exit indications) or kilometers (as distance-to-destination indications), and not miles. However, the speed limit signs give speeds in miles per hour. According to the Arizona Department of Transportation (ADOT), metric signs were originally placed because of the push toward the metric system in the United States at the time of the original construction of the highway. [5]

I-19 had originally been signed as it was constructed, in a series of small signing contracts that used customary units. [6] In 1980, ADOT awarded a single contract to install new signs which used metric units, to overlay English-unit expressions on some existing signs with metric-unit expressions, to install kilometerposts, and to provide bilingual signing in select locations. The signing scheme used in 1980 provided explicit units on advance guide signs, but not on interchange sequence signs or post-interchange confirmation (distance) signs.

The expressions on advance guide signs were of the form "2 km" for distances over 1 kilometer (0.62 mi) and "500 m" for distances under 1 kilometer (0.62 mi), with no provision for fractional kilometrages. On advance guide signs, the metric unit expressions "km" and "m" were placed on the baseline where "MILES" would otherwise have gone but were sized so that their lowercase loop height matched the uppercase letter height of "MILES" on customary-unit signs.

The exception was a handful of advance guide signs for the SR 86 (Ajo Way) exit, which used "KM" (in uppercase, contrary to SI nomenclature) on the same baseline and at the same letter height as "MILES." The 1980 signing plans also provided design details for speed limit and advisory speed signs using metric units, with the limit values enclosed in a red circle on the speed limit sign and a black circle on the yellow-background advisory signs. These speed signs all had explicit units, with "km/h" below the circle enclosing the limit value. However, the advisory signs were cancelled by change order and not installed.

Had the metric speed limit sign been installed, the signed speed limit on I-19 would have been 88 kilometers per hour (54.7 mph), which is a close soft-conversion of the then-existing 55 miles per hour (88.5 km/h) national maximum speed limit. Information signs, to three distinct designs, were also placed at various locations on or near I-19 to advise motorists that the highway was signed in metric. Notwithstanding the metric legends, the signing plans were dimensioned entirely in feet and inches. [7]

In 1999, ADOT awarded two contracts (administered as a single construction project) to renew the signs along the full length of I-19. The general approach toward metric signing differed from that taken in 1980. Explicit units were given not just on advance guide signs, but also on interchange sequence signs, post-interchange confirmation signs, and community interchange signs (the last-listed had not been used in 1980). On the distance signs, "km" appeared after each kilometer measurement except when one or more of the distances was a fractional kilometer.

In such cases, all the distances were given in meters with "meters" (written out in full, not "m") after each distance value. On distance signs in general, "km" or "meters" appeared on the same baseline and with the same letter height as the distance values, while advance guide signs were formatted as in 1980. Since a typical ADOT freeway guide sign rehabilitation contract also replaces surface road signing near those roads' interchanges with the freeway, metric-unit signs also appeared on local roads near I-19, giving distances in kilometers to tourist attractions such as Mission San Xavier del Bac.

As was the case in 1980, the signing plans were dimensioned in feet and inches. [8] However, a number of signs near the Valencia Road interchange were replaced or amended when it was converted from a partial cloverleaf to a single-point urban interchange in 2000. One of these signs has a fractional kilometrage greater than 1 kilometer (0.62 mi), rendered as "1500 m," while others use "m" rather than "meters" as the unit expression. Metric unit expressions on the advance guide signs installed or modified as part of this contract appear on the same baseline as the metric values, rather than on a raised baseline as on other I-19 advance guide signs. Again, the plans were dimensioned in feet and inches. [9]

Citing motorist confusion arising from the metric signs on I-19, ADOT's Tucson district announced that new signs on I-19 would use United States customary units. To avoid the cost of replacing the metric signs all at once, signs would be replaced in specific areas of the freeway during construction projects in those areas. [10] New signs were put into place between exit 99 (Ajo Way) and exit 101 (I-10) in 2004 after the completion of the new I-10/I-19 interchange.

As of 2010, the remainder of the project has been stalled due to local opposition, particularly from businesses that would have to change their directions. [11]

A recent reconstruction project at the Interstate's northern terminus with I-10 in Tucson (at the interchange commonly called the Crossing) was begun in 2002 and completed in August 2004. [12]

The first sections of I-19 to be opened to traffic were a three-mile (4.8 km) stub, from I-10 to Valencia Road, in 1962 and a two-mile (3.2 km) stretch in Green Valley in 1963. The freeway between Rio Rico and Nogales, Arizona was completed in 1974. The major section between Green Valley and Rio Rico was finished in 1978. The official completion date of the I-19 segment between Tucson (km 100) and Green Valley (actually Helmet Peak Road at km 75) was February 12, 1972. A 1978 project report for ADOT lists entire I-19 project as "completed", which includes segments between Green Valley and Nogales.

I-19 is a very heavily traveled corridor in the Tucson metro area. The freeway is currently two lanes in both directions for its entire length, with the exception of the interchange with I-10, where it is four lanes. Current plans call for widening from Irvington Road to Ajo Way, bringing the freeway to three lanes in each direction. [13] Future plans include expansion to up to five lanes in each direction by 2030 from the crossing with I-10 to San Xavier Road. [14]

Historically, Interstate 19 has had two business loops, both of which are former sections of US 89, SR 93 and SR 789. One is currently active while the other is decommissioned. Both business loops are currently and formerly recognized under the unsigned designation Arizona State Route 19 Business (also known as State Business Route 19).

A map of the Nogales business loop. The route is highlighted in red.

State Business Route 19 (1) (also known as SR 19 Bus.) begins at the Mexican border in Nogales near the southern end of the Interstate. I-19 Business follows Grand Avenue in Nogales and has intersections with SR 82 and SR 189 before terminating at I-19 just north of Nogales. [2] The route follows the former alignment of US 89, SR 93 and SR 789, back when all three highways traversed through southern Arizona. [17] The route has been commissioned as I-19 Business since US 89 was decommissioned from southern Arizona in 1992. [16]

Major intersections
The entire route is in Santa Cruz County.

A map of the Tucson business loop. The route is highlighted in red.

State Business Route 19 (2) (also known as SR 19 Bus.) began at I-19 Exit 69 in Green Valley at West Duval Mine Road and South Nogales Highway. I-19 Business followed Nogales Highway north through unincorporated Pima County and Sahuarita into Tucson. In Tucson, I-19 Business curved from Nogales Highway onto South 6th Avenue where it served as the eastern terminus of SR 86 at West Ajo Way, before terminating at I-10 Exit 261 and South 6th Avenue in South Tucson. [2] The route follows the former alignment of US 89, SR 93 and SR 789, back when all three highways traversed through southern Arizona. [17] The route was commissioned as I-19 Business since US 89 was decommissioned from southern Arizona in 1992. [18] In 2002, the state handed maintenance of I-19 Business between Los Reales Road and I-10 to the city of Tucson. [20] The rest of the route was handed over to Pima County and the city of Sahuarita in 2004. This also meant the designation was retired from the state highway system completely. [19]

Major intersections
The entire route was in Pima County.