From Wikipedia, the free encyclopedia
Place in Texas, United States

Downtown Dallas is the central business district (CBD) of Dallas, Texas, USA, located in the geographic center of the city. The area termed "Downtown" has traditionally been defined as bounded by the downtown freeway loop, bounded on the east by I-345 (although known and signed as the northern terminus of I-45 and the southern terminus of US 75 ( Central Expressway), on the west by I-35E, on the south by I-30, and on the north by Spur 366 (Woodall Rodgers Freeway).

The strong organic growth of Downtown Dallas since the early 2000s and continuing into the present has now resulted in Downtown Dallas, Inc.'s expansion of the term "Downtown" to include the explosive growth occurring immediately north of the Woodall Rodgers Freeway in the Victory Park and Uptown/Turtle Creek Districts, as well as past Central Expressway to the east in the Deep Ellum and Bryan Place Districts, past Interstate 30 to the south with the Cedars District, and jumping over Interstate 35E to the west to include the Design District and Lower Oak Lawn. In total, 15 districts now form "Downtown". [1]

Downtown Dallas is now viewed as an interconnected grouping of dense and urban center city districts, that while unique in their own right, also share strong urban linkages to each other and collectively participate in their role as Downtown Dallas. [2]

Downtown Dallas achieved notoriety on November 22, 1963, with the assassination of President John F. Kennedy. Both President Kennedy and Texas Governor John Connally (who survived) were shot as their motorcade passed through Dealey Plaza in what is now the West End Historic District. Part of the former Texas School Book Depository is now the Sixth Floor Museum, with exhibits about Kennedy and the assassination. Nearby is the John Fitzgerald Kennedy Memorial.

The building boom of the 1970s and 1980s produced a distinctive contemporary profile for the downtown skyline influenced by nationally prominent architects. At the same time, the establishment of the West End Historic District in the 1980s preserved a very large group of late 19th-century brick warehouses that have been adapted for use as restaurants and shops.

With the construction of the Dallas Center for the Performing Arts in the Arts District of Downtown, Dallas will be the only city in the world that has four buildings within one contiguous block designed by four separate and distinguished Pritzker Architecture Prize winners.

Downtown Dallas has also gained more recent national attention, as it was the location of the 2016 shooting of 14 Dallas police officers.

View of Downtown Dallas from across the Trinity River

The area has been undergoing a transition as dozens of residential conversions and new high-rise condominiums bringing more permanent residents to the downtown area. (See: North Central Texas Council of Governments (NCTCOG). [3]) As of 2017, an estimated 10,766 residents lived within the area. [4] Its redeveloped Main Street has recently become more of a place for Dallasites to play after several restaurants, hotels, and residential towers opened their doors along the strip. Downtown's growth can partially be attributed to Dallas Area Rapid Transit's four light rail lines and one commuter line Trinity Railway Express that run through Downtown and an aggressive stance taken by the city to drive development at all costs. The city has invested $160 million of public funds in Downtown Dallas for residential development that attracted $650 million of private investment. [5] 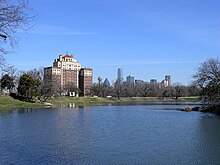 Downtown Dallas as seen from Lake Cliff in Oak Cliff

Two of the first new-construction office building projects downtown in over 20 years broke ground in 2005— One Arts Plaza, a 24-story mixed-use office, retail, residential development in the Arts District, which is the new home of 7-Eleven's world headquarters; and the vibrant, 17-story Hunt Consolidated office building, with its spectacular, state-of-the-art LED exterior lighting, which is the national headquarters for and fully occupied by Hunt Oil. Additionally, the $200 million, 42-story Museum Tower residential skyscraper in the Downtown Dallas Arts District was completed in 2013.

Importantly, the Trinity River Corridor is poised to undergo a significant transformation (the Trinity River Project) into a giant urban park. The park is expected to include an equestrian center, lakes, trails, and three bridges designed by Santiago Calatrava. Funding over the years, however, has been a constant problem, though serious work on the project now appears eminent, with the first two bridges having received significant private backing.[ citation needed] 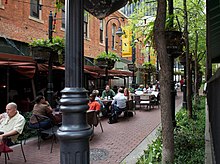 Downtown Dallas has undergone a series of important changes that city officials believe will drastically improve the city's core. These changes are located in four downtown areas: Victory Park, the Arts District, the Trinity River, and the Convention Center corridor.

Victory Park, named one of the nation's most successful brownfield reclamation projects, is home to the American Airlines Center, built in 2001, and several new high-rise hotels, residential towers, and office buildings, including the 33-story "W Dallas Victory Hotel and Residences" (2006), the 28-story "Cirque" residential tower (2007), the 29-story "The House" residential tower (2008), and the 20-story "One Victory Park" office tower (2009). Also currently under construction in Victory Park is the new "Perot Museum of Nature and Science", a $185 million, 14-story, ultra-modern addition to Downtown Dallas that opened in late 2012.

The Dallas Arts District, already one of the world's largest, recently completed the final stages of a massive 10-year construction project that resulted in a 2,300-seat opera house, a series of theaters, residential space, retail, parks, and a gleaming, 42-story residential tower known as Museum Tower that opened in 2013. One of the prominent attractions in the Arts District is the Dallas Museum of Art.

Of all the changes in downtown Dallas, the Trinity River corridor is undergoing the most dramatic. Currently, the river runs in an artificially straight line a large distance from any part of downtown, but Dallas is in the process of returning the river to its natural course, creating two large lakes to border the downtown area, and has commissioned two large cable-stayed bridges to be built across the river and new lakes. Dubbed the Trinity River Project by local officials, plans are also in place for improved levees to protect downtown from possible flooding.

Separated from Victory Park and the Arts District by the Downtown CBD is the Convention Center corridor, which hosts the over 2 million-ft2 Dallas Convention Center. The Omni Dallas Hotel is a new, 23-story, convention-center hotel that opened in 2011. Dallas hopes these changes will bring more permanent residents into the downtown area; as of the 2010 Census the downtown population has grown to 5,291 from the 1,000 citizens who lived in downtown at the end of the 20th century.

The City of Dallas, along with several nonprofit organizations, constructed a $110 million urban deck park over Woodall Rodgers Freeway to create a physically seamless Uptown/Downtown District; the urban deck park opened in 2012. The 5.2-acre urban green space, named the Klyde Warren Park, further strengthens the existing synergy between the Uptown real estate market and the booming development occurring in the Downtown Dallas Arts District, which together help further the continuing growth and redevelopment of Downtown Dallas. The park is often called an "urban oasis" due to its unique location and features. 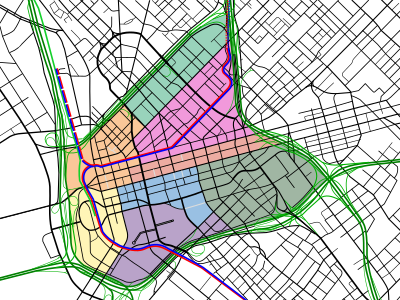 The McKinney Avenue Transit Authority operates the M-Line, a free trolley service that runs down St. Paul Street from Uptown and terminates at Ross Avenue. North from downtown, it travels to McKinney Avenue from St. Paul, runs through the LoMac neighborhood, and finally loops around the West Village along Blackburn and Cole Avenues. A spur adjacent to the West Village runs to Cityplace Station. [24]

Greyhound Lines operates a terminal at 205 South Lamar Street. [25] DART operates the West and East Transfer Centers as hubs for its public bus system. [26] The Denton County Transportation Authority operates an express commuter bus route that serves two stops in Denton, one stop in Lewisville, and another that makes two stops, one in Denton and another in Carrollton.

The Dallas Pedestrian Network is a system of grade-separated walkways covering 36 city blocks under Downtown Dallas. The system connects buildings, garages, and parks through tunnels and above-ground skybridges. The network contains an underground city of shops, restaurants, and offices during weekday business hours. 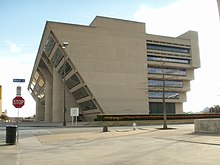 The Texas Fifth District Court of Appeals is located in the George L. Allen, Sr. Courts Building in Downtown Dallas. [30]

Downtown Dallas is served by the Dallas Independent School District. [32]

Luna Academy, a K-3, 6 charter school of Uplift Education, is in Downtown Dallas. [44] It used to be called Laureate, but there were other schools with the name and if they did not change it they would have been sued.[ citation needed]

Residents are also served by First Baptist Academy of Dallas, a college preparatory Pre-K through 12 school located in the city center district of downtown Dallas. Holy Trinity Catholic School is a nearby centrally located private school providing early education to three-year-olds through eighth grade. [45] It is supported by the Roman Catholic Diocese of Dallas. 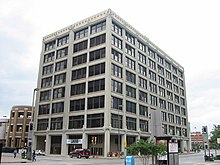 El Centro College of the Dallas College is in downtown.

The University of North Texas, located 40 miles (64 km) to the northwest in Denton, opened a law school downtown. [46]

Pacific Plaza, a park on 3.7 acres (1.5 ha), opened in 2019. The organization Parks for Downtown Dallas provided the funds for it. Sharon Grigsby of The Dallas Morning News stated that the park replaced a " no-man’s land". [48] A grand opening ceremony was held on Monday October 14, 2019. [49]