Westchester County Airport ( IATA: HPN, ICAO: KHPN, FAA LID: HPN) is a county-owned airport in Westchester County, New York, [1] three miles (6 km) northeast of downtown White Plains, [1] with territory in the villages of Rye Brook and Harrison. It is sometimes referred to as the White Plains Airport and is so identified by the Official Airline Guide (OAG). [3]

The first scheduled airline flights were by American Airlines in late 1949 with a weekday morning flight from New York LaGuardia Airport to HPN continuing to Syracuse Hancock International Airport and beyond and returning in the evening. Mohawk Airlines replaced American in 1955; Mohawk and successor Allegheny Airlines served HPN until 1979. The first scheduled jet flight was a Mohawk BAC One-Eleven in 1965. Before the federal Airline Deregulation Act in 1978, the airport was served in 1976 by Allegheny Airlines BAC One-Elevens and by several commuter air carriers including Air Speed, Command Airways and Commuter Airlines. [7] Air Florida arrived in 1980 and United Airlines during the mid 1980s. American Airlines also resumed mainline service. On January 5, 2006, the last flight operated by regional carrier Independence Air left HPN for Washington, D.C. at 7:26 pm. [8]

In the summer of 1981 Air Florida's timetable listed international nonstop Boeing 737-200 service to Bermuda from the airport. [12]

In June 2005 the airport made headlines when a drunken teenager, with two friends, stole a Cessna Skyhawk from nearby Danbury Municipal Airport around 1AM and landed on a taxiway at Westchester County Airport around 4AM. The aircraft was low on fuel and allegedly flying erratically. HPN airport was closed at the time and no runway lights were illuminated. Police arrived on the scene and reported beer bottles falling out of the aircraft as they arrested the teens, all of whom were charged with various felonies relating to the unauthorized use of the aircraft, theft, and alcohol impairment. [13]

JetBlue began service at the airport in 2007 and is now the airport's largest carrier with eleven daily round trips to five destinations. JetBlue and Delta are the only airlines operating mainline jet aircraft at HPN at the present time.

In June 2009, Cape Air commenced service to Westchester with flights to Nantucket and Martha's Vineyard in Massachusetts. Cape Air introduced service to Lebanon Municipal Airport in New Hampshire in early 2010. All Cape Air flights depart and arrive from the Signature Flight Support facility south of the Main Terminal due to a lack of ticket counter space in the main terminal building.

In June 2010, a regional airline affiliate for Air Canada announced it would cease all flights into the airport. Commuter code sharing service with Beechcraft turboprop aircraft was flown on behalf of Air Canada for several years between the airport and Toronto. [10] This ended international flights until service to the Bahamas began in 2011. However, the airport currently does not have any international nonstop service.

In 2013, Delta Air Lines announced that it would begin seasonal service to Orlando starting in December of that year. This service is currently operated on a seasonal basis by regional code sharing affiliate Delta Connection.

In December 2015, Tradewind Aviation began service to the Morrisville-Stowe Airport in northern Vermont. [14]

In August 2016, American Airlines announced nonstop service to Miami via its American Eagle subsidiary. Flights would depart twice-daily from HPN at 7 AM and 1:59 PM on Embraer E-175 aircraft operated by Republic Airways. [15] Service commenced on December, 15 2016, only to cease in late 2017. This was the first commercial airline service addition since AirTran Airways folded.

Between December 2 and 20, 2017, Delta Airlines upgauged 1–2 flights on select days to Boeing 717 aircraft to test increased payload feasibility to HPN. This was necessitated by the airport's limit of 240 arriving and departing passengers per half-hour; operators who exceed this cap are fined. (Officially, this is said to improve service, but likely exists to pacify anti-airport residents in neighboring communities. [16])

As of February 2020, Delta continues to use this equipment for flights on the HPN-ATL route along with the Bombardier CRJ900.

On April 27, 2020, the airport was closed to general aviation traffic for one week and commercial airlines for about a month so Runway 16/34 could be repaved, a project originally scheduled to span four months with construction only occurring from midnight to 6 AM. This decision was made in the midst of COVID-19 pandemic-related air travel cuts, which drastically reduced commercial airline service to the airport. Some operators were forced to ferry their aircraft to nearby airports where they could continue flights. This was the first total shutdown of a U.S. commercial airport for reasons relating to the COVID-19 pandemic. [17]

In 2021, several capital projects are planned, including a new US Customs and Border Protection facility and a new ARFF Station.

In its effort to mitigate aircraft noise pollution into neighboring communities, HPN maintains six major noise abatement programs that are in effect daily.

One of them is its Voluntary Restraint from Flying Program (VRFF), sometimes referred to as a voluntary curfew, [18] that helps assuage anti-airport complainants by requesting--not mandating--that operators refrain from flying into the airport between midnight and 6:30 AM. Those that breach the VRFF are reminded of the initiative and notified of any noise complaints that may have resulted from their operations.

The airport's Airport Noise and Operations Monitoring System (ANOMS) collects noise data from remote noise-monitoring terminals, and both registered aircraft and community noise levels are published in the Airport Monitor. This system works in conjunction with the High Range Noise Event (HRNE) Program; ANOMS staff can identity any operator who causes a maximum noise level event of 90.0 decibels or higher at any of its remote noise monitor terminals and advise them in order to prevent future noise level transgressions. As of September 2020, there are no fines, penalties, or aircraft restrictions associated with this program.

Additionally, HPN prohibits intersection takeoffs from its runways and restricts maintenance runups and use of reverse thrust. It also employs Advanced Authorization for operations. [19]

Following several renovations and discussions about the airport's viability, [20] HPN is currently served by six passenger airlines with flights to sixteen destinations throughout the United States. Although there has long been controversy over the airport and its proposed expansions, [21] concerns have also arisen regarding travelers seeking relief from long delays at the other New York metropolitan area airports, such as John F. Kennedy International Airport (JFK) and LaGuardia Airport (LGA).

More recently, these concerns pertain to flight paths [22] and vehicular congestion. The latter has been addressed by the County of Westchester with Bee-Line Bus System (bus #12 from downtown White Plains) [23] service to the airport and the encouragement of travelers to share rides to the airport. [24]

In May 2011, the New York State Department of Transportation published the "New York Statewide Airport Economic Impact Study," highlighting the economic impacts of public-use airports in New York state for fiscal year 2009. The study noted that HPN was one of only three airports in the state that increased its enplanements, surpassing the U.S. benchmark. It also noted that the cumulative economic activity for the airport was approximately $736 million. [27]

The airport can be accessed from I-684's Exit 2 onto New York State Route 120. More directly, the terminals are accessed by NY Route 135.

The IATA code for Westchester County Airport is HPN. However, the origins of this code are controversial. Some believe it is derived from the name of the city, White Plains (IATA codes normally do not begin with W because those are reserved for radio signals), while others maintain the IATA code represents the first letter of the airport's three neighboring communities, Harrison, Purchase, and North Castle. [28] The full ICAO code for Westchester County Airport is KHPN. 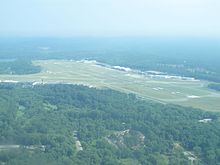 There are three flight schools. Performance Flight operates out of the Million Air at Hangar M, while Academy of Aviation operates out of Ross Aviation West at Hangar T. Wings Air offers helicopter flight training out of Hangar T. Additionally, the Westchester Flying Club, a private organization of pilots, is based at the airport as well as the Westchester Aviation Association, a not-for-profit organization which promotes aviation education and understanding on the part of government authorities and the public.

Aircraft Rescue Fire Fighting (ARFF) is provided by Airport Operations Crews. The airport owns three ARFF apparatuses (three Oshkosh Striker 1500s), two of which are in service full-time. The ARFF Crews only respond to aircraft emergencies. All structure-related fire and rescue calls are deferred to the local fire departments. The Purchase Fire Department, for example, handles all structure calls on the southern part of the airfield, the Armonk Fire Department handles calls on the northern part and the Rye Brook/Port Chester Fire Department handle all calls on the east end, including the main terminal. EMS calls are handled by Port Chester-Rye-Rye Brook EMS, Harrison EMS and Armonk Fire/EMS depending on location of call. 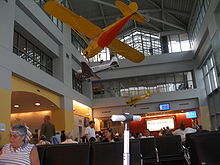 The gate area in the main terminal

Westchester County Airport has one small, three-level terminal with six gates, of which only four can be used simultaneously because only four aircraft can be scheduled to use the terminal's ramp at any given time. The $35 million terminal was built in 1995 and designed by Lothrop Associates. [31] Gates A, B, C, and F have jetways. The terminal also has a luggage carousel, a baggage reclaim office and two Transportation Security Administration (TSA) screening lanes. Passenger amenities include a gift shop, departure lounge, and food concessions such as a Dunkin' Donuts. [32]

In November 2015, the airport began a $30 million construction project to expand the terminal and ramp areas. The project will expand the terminal by 20% and include additional check-in, screening and passenger waiting areas. The expansion will also include the addition of four new jet bridges. A separate terminal with "lodge-like ambiance" [33] to serve passengers of private jets opened in 2019. [34]

Expansion of the airport has raised concerns over adverse environmental impacts by numerous community advocacy groups and area residents. The facility lies between the Blind Brook watershed and the Rye Lake watershed/ Kensico Reservoir. The Citizens for a Responsible County Airport which count the Sierra Club Lower Hudson and Federated Conservationists of Westchester as supporters have raised safety concerns about the stormwater runoff directed towards Westchester and New York City's drinking water supply. They are especially alarmed about PFAS discovered in groundwater tests between the Airport and the Kensico watershed. [41]