From Wikipedia, the free encyclopedia
Airport in Norfolk, Virginia
"Norfolk Airport" redirects here. For airports in the English county of Norfolk, see List of airports in Norfolk. For the airport in Massachusetts, see Henan-Menon Memorial Airport.

Norfolk International Airport ( IATA: ORF [3], ICAO: KORF, FAA LID: ORF) is seven miles (11 km) northeast of downtown Norfolk, an independent city in Virginia. [2] It is owned and operated by the Norfolk Airport Authority: a bureau under the municipal government. The airport serves the Hampton Roads metropolitan area of southeast Virginia (along with Newport News/Williamsburg International Airport in Newport News) as well as northeast North Carolina, and despite the name the airport does not have any international destinations.

As of 2017 [update], Norfolk International was ranked as the 70th-busiest airport in the United States and the fourth-busiest in Virginia in terms of passengers served annually following Richmond International, Dulles International Airport and Reagan National Airport. [6] United Airlines, Delta Air Lines, and American Airlines are the predominant users of the airport. 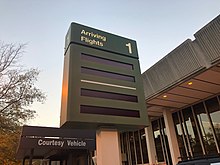 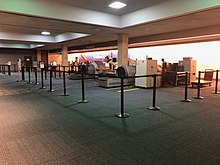 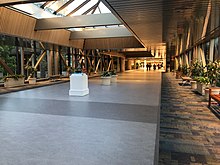 Bridge that connects the Arrivals and Departures building 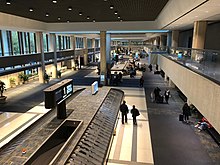 The crosswind runway (14–32) was closed for renovations on December 19, 2009, and reopened in Spring 2011. The airport's long-term plan calls for this runway to be destroyed to make way for a parallel runway (5R-23L) east of runway 5–23, but the FAA grounded the plan in summer 2016 due to diminishing demand, limited space, and environmental impacts.

General aviation services, or fixed based operations, are provided by Landmark Aviation with full-service facilities for maintaining and housing private and corporate aircraft. The modern 54,000-square-foot (5,000 m2) terminal facility offers everything from aircraft rental to sightseeing flights and aircraft repair.

Built in 1995, the FAA Norfolk Air Traffic Control Tower stands 134 feet (41 m) high. Operated and managed by the Federal Aviation Administration, the Norfolk Tower handles about 1,100 aircraft per day, 24 hours per day and 365 days per year. Radar coverage is provided by the ASR-9 terminal system with a six-level weather detection capability. Also available for use is an Enhanced Target Generator (ETG) lab with two radar scopes to accomplish training objectives, as well as the IDS4 system, a specialized microcomputer network system designed to distribute and display both static and real-time data regarding weather and other rapidly changing critical information to air traffic controllers.

Norfolk International Airport has two passenger concourses: Concourse A (gates A1-A11), and Concourse B (gates B16-B30). American Airlines and Southwest Airlines occupy Concourse A while Allegiant Air, Delta Airlines, Frontier Airlines, and United Airlines occupy Concourse B. International flights are handled at gate A1, however, there are currently no scheduled international flights. Specific gate locations are the following: American A2, A4, A6-A11, Delta B21-B25, Southwest A3 and A5, United B27-B30, with Allegiant and Frontier using common gates of B16, B17, B18, B20. Concourse B gates B22 and B26 are no longer in use.

About 70 million pounds of air cargo are shipped in and out of Norfolk International Airport each year. [7] NIA houses one of the most modern and efficient air cargo facilities in the state. Its two modern air cargo terminals have 88,000 square feet (8,200 m2) of space. A ramp provides direct access from plane to warehouse.

There are no bus or shuttle services to and from Norfolk International Airport. The nearest bus (HRT Route 15) connection is 1.5 miles (2.4 km) away at the intersection of Military Highway (Route 165) and Norview Avenue (Route 247). [19] All ground transportation services are located in the arrivals terminal. There are several on-site rental car companies, an authorized shuttle service providing door-to-door service to the entire Hampton Roads area, and taxis available through several companies. Additionally, both Uber and Lyft service the airport through an agreement with the airport authority. 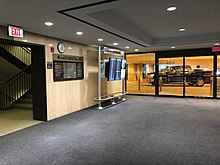 The main entrance to the parking garage at ORF.

A nine-level parking garage adjacent to the new arrivals terminal opened in July 2002. It provides 2,800 covered spaces for short term, long term and rental parking. Overall, NIA parking facilities can accommodate 7,000 vehicles. [20] In February 2019, the airport announced it would begin construction of a brand new 1.09 million square foot parking garage. Construction started in July 2019. This new parking garage will consolidate all parking lots at ORF. It will also replace the employee shuttle that costs over $600,000 a year to operate. [21]