Montauk Point is 72 miles (116 km) to the east and Manhattan is 60 [3] miles (97 km) west; MacArthur Airport serves Nassau and Suffolk counties as an alternative to the JFK and LaGuardia airports – both in Queens in New York City. [4] Shuttle buses connect the airport to the Ronkonkoma Railroad Station.

The FAA designated LIMA an Official Metro Airport in early 2011, [5] meaning it is now grouped with LaGuardia, JFK and Newark in travel and informational searches for New York airports, providing better exposure. MacArthur Airport does not share the congested airspace of the city-centric airports and has an exceptional record of on-time performance. In 2009, 83.6% of flights arrived on time and 85.6% of flights departed on time. [6]

In April 1942 the Town of Islip contracted with the federal government to build an airfield on town-owned land for military use. [7] Within months the Civil Aeronautics Administration – predecessor to today's Federal Aviation Administration – funded construction of three paved runways. Originally named Islip Airport, at the suggestion of Charles H. Duryea, a local elected official, the airport was renamed MacArthur Airport after General Douglas MacArthur, whose dramatic escape from the Philippines had captured the attention of the world. [7]

In 1960 Allegheny Airlines was the first scheduled passenger airline at Islip, flying to Boston, Philadelphia and Washington, D.C.. The March 1961 Official Airline Guide lists five weekday Convair 440 departures: a nonstop to Washington National, one to Baltimore, and three flights direct to Boston via several stops. The General Douglas MacArthur Terminal was completed in 1966. In 1967 Mohawk Airlines began two Fairchild Hiller FH-227 flights a day, to Bridgeport and Albany and beyond with one flight continuing to Toronto. By 1969 Mohawk was flying BAC One-Elevens nonstop to Syracuse. [8] In 1972 Mohawk had nonstops to Albany with direct service to Buffalo and Rochester. [9] Mohawk would soon be merged into Allegheny Airlines.

In 1971 American began flying nonstop Boeing 727-100s to Chicago O'Hare Airport. By 1974 Allegheny had started BAC One-Elevens and McDonnell Douglas DC-9-30s nonstop to Albany and Washington D.C. National Airport, and direct jets to Burlington, VT, Cincinnati and Detroit. Allegheny continued Convair 580s nonstop to Albany, Boston, Bridgeport and Washington D.C. in addition to direct Convair 580s to Buffalo and Rochester. [10] Allegheny would be renamed USAir which then became US Airways with these respective airlines operating service into the airport for many years before US Airways was merged into American.

Most of the above airlines ceased serving Long Island MacArthur, but between 1999 and 2009 passenger traffic grew with the airport now serving about two million passengers a year on three airlines: Southwest, Frontier and US Airways Express with the latter now operating as American Eagle Airlines after the merger of US Airways with American

In later years Continental Express continued to serve the airport with nonstop regional jets to Cleveland while Continental Connection scheduled nonstop turboprops to Albany, NY; both services ended in 2005. Spirit Airlines scheduled flights to several Florida cities and Detroit, before moving to LaGuardia Airport in 2001; in May 2008 the airline resumed service to Fort Lauderdale from MacArthur, dropping it soon after. [17] [18] Delta Express, which had nonstops to Orlando and Fort Lauderdale, dropped MacArthur Airport in 2003 after a decline in traffic. Delta Connection regional jet service to Atlanta flown by Atlantic Southeast Airlines (ASA) on behalf of Delta Air Lines ended on May 1, 2008 following a mid-April announcement that Delta and Northwest Airlines were planning to merge – a move that led to changes for the merged airline.

As of January 2014 Southwest was operating year-round non-stops to Baltimore, Fort Lauderdale, Orlando, Tampa, and West Palm Beach, and seasonal service to Fort Myers. Allegiant Air previously operated two weekly flights on a seasonal basis to Fort Myers/Punta Gorda, FL. with McDonnell Douglas MD-80s but no longer serves the airport. PenAir began operating two daily nonstop flights to Boston in July 2013, but stopped flying to MacArthur a year later. The only legacy carrier serving Islip now is American Airlines with Embraer ERJ-145 code share flights operated by its American Eagle Airlines regional affiliate Piedmont Airlines to Philadelphia. Service to Washington–National ended on July 2, 2014, after the merger between US Airways and American. The newly merged airline had to cut service to 17 cities from Washington–National because of an antitrust lawsuit preventing the airline from monopolizing slots at National Airport. American Airlines reapplied for nonstop service between MacArthur Airport and Washington–National when two slots opened up, but in early 2015 the airline lost the bid for these two slots. [19]

Growth in the 21st century 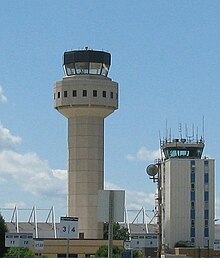 Established about midway through the 20th century, by the end of the century MacArthur Airport had been transformed. Growth and expansion continued in the early years of the 21st century, but by 2014 the airport was experiencing financial difficulties. [22]

A major proponent of the airport's 2004–2006 expansion projects was Peter J. McGowan, then the Islip Town Supervisor; the new concourse was named after McGowan. The terminal was renamed Veterans Memorial Concourse in homage to Long Island's distinction as home to more military veterans than almost any other community in the United States.[ citation needed]

The 2004 expansion was built without state approvals and in violation of fire and safety codes, which resulted in a scandal. [23] [24]

A new control tower was completed in 2010 and opened in 2011 to replace the tower built in the early sixties. In 2010 a new state-of-the-art Fuel Farm will increase the jet fuel supply. The airport has plans to reconfigure the roadway in front of the terminal; another taxiway is planned along with other projects using FAA airport improvement program funds. Development of the West Side, home to a thriving general aviation sector, will get underway in late 2010.

While the airport continues to expand it has added numerous amenities, including free courtesy cell phone parking (located in the rear of Lot 6B). In November 2009 MacArthur Airport became the only airport in the Tri-state region to offer free wireless in the entire terminal and in the courtesy cell phone parking lot. [25] In addition, the airport launched several tools designed to provide up-to-date information to travelers, including: the airport's first official Website – www.flyLIMA.com. All passenger food catering within the airport terminal is provided by HMSHost, which operates five restaurants.

In March 2017, plans were announced to build a U.S. Customs Station at MacArthur Airport by the end of 2019 with help from financial assistance from New York State Governor Andrew Cuomo. This will be an attempt at making MacArthur an international destination and at enticing airlines to add MacArthur to their destinations. Beginning in late March, a marketing campaign is to be undertaken by the Town Of Islip to announce the revival of the airport. This will include advertisements on public transportation, digital marketing, and radio spots. In years past, previous campaigns have targeted airlines. This time, the $180 million campaign focus will be on potential passengers and commuters. A new logo and slogan will be announced in the future, as well. The thought process is that by attracting more passengers, the airport will attract more airlines, including international flights.

On July 17, 2017, Frontier Airlines announced service to 10 new cities using aircraft as large as the Airbus A321 which approaches the Boeing 757 in range and passenger capacity, a first for the airport in the past decade. [26] [27]

MacArthur Airport currently has two concourses in one main terminal. Concourse A has nine gates, concourse B has two gates with jetways and multiple gates that board from the ramp. 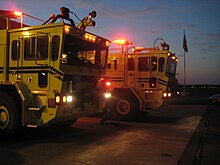 Long Island MacArthur Airport is owned and operated by the Town of Islip. The Department of Aviation is led by the Commissioner of Aviation and Transportation, who works closely with the Town Board to manage and steward the airport. Departments include Airport Operations, Custodial, Fire Rescue, Law Enforcement, Maintenance, Construction, and Administration.

The Suffolk County Police (SCPD) Aviation Section has a Law Enforcement and MEDEVAC helicopter based at MacArthur Airport. The base is staffed 24 hours a day by Police Pilots, as well as Flight Paramedics employed by the Stony Brook University Medical Center.

Until the early 1990s, the 2nd Battalion (Attack), 142nd Aviation Regiment of the N.Y. Army National Guard's 42nd Infantry Division Aviation Brigade, was based at MacArthur Airport, equipped with Bell Helicopter AH-1 Cobra (F model) gunships. In 2006, the 3rd Battalion (Assault), 142nd Aviation Regiment moved its headquarters from Latham, N.Y. to Long Island MacArthur Airport, bringing its Sikorsky UH-60L Black Hawk helicopters. In May 2007, following yet another reorganization in which the battalion was re-configured, the unit received its mobilization alert order to participate in Operation Iraqi Freedom. Over the course of their deployment, the unit – which came to be known as Task Force Jester – flew more than 15,000 flight hours. The last of the battalion's troops returned home to Long Island MacArthur Airport in May 2009.

MacArthur Airport is connected with the nearby Long Island Rail Road station at Ronkonkoma by shuttle buses and taxi service. The LIRR offers passengers transportation to nearby New York City. The LIRR currently offers a discount package for airport passengers, which includes the cost of shuttle service between the train station and airport terminal.

The Hampton Jitney's Westhampton, Montauk, and North Fork lines stop along the Long Island Expressway (Interstate 495) at Exit 60. It is called the Islip Airport Connection, and is a short cab ride away from the airport terminal.

Long Island MacArthur Airport has been used several times as a filming location: