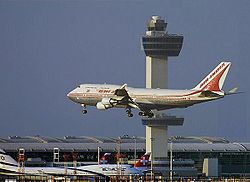 An Air India Boeing 747-400 arrives at JFK, with El Al Israel and Swiss International jets at Terminal 4 in 2004. JFK is the largest entry point for international arrivals to the United States.

The New York metropolitan area has the busiest airport system in the United States. It is also the most frequently used port of entry and departure for international flights. In 2011, more than 104 million passengers used the airports under the auspices of the Port Authority of New York and New Jersey (PANYNJ). [1] [2] The number increased to 117 million in 2014. [3]

The class B airspace used by the three airports is extremely congested. Despite caps placed by the Federal Aviation Administration (FAA) limiting the number of flights per hour, they rank among the top five in the United States for delays. [5] [6] In 2012, travel guide Frommer's rated three terminals in the region as the worst in the world: JFK Terminal 3, Newark Terminal B, and LGA's US Airways terminal. It rated Terminal 5 at JFK as the best in the US. [7] [8] The metro area airports also ranked low in 2017 consumer surveys. [9]

In addition to JFK, EWR, and LGA, there are satellite or reliever airports in the metro area which provide additional commercial air carrier service, albeit on a much smaller scale, [10] as well as numerous general aviation airports, heliports, and seaplane bases.

While other localities had municipal airports, New York City had a multitude of private airfields, and thus did not see the need for a municipal airport until the late 1920s. [11] [12] Flushing Airport opened in 1927, quickly becoming the city's busiest airport; it closed in 1984. [13] Newark Liberty International Airport opened in 1928. [14] It was followed by Floyd Bennett Field in 1930; New York City's first municipal airport, it built largely in response to the growth of commercial aviation after World War I. [15] LaGuardia Airport was opened in 1939, [16] and Floyd Bennett Field was closed for general aviation two years later. [17] John F. Kennedy International Airport opened as Idlewild Airport in 1948. [18]

Regulations are in effect in the airspace where flight is permitted under visual flight rules (VFR), the East River VFR corridor and the Hudson River VFR corridor. The southern end of both begins at the Verrazano-Narrows Bridge. The corridor along the Hudson River allows VFR flight along the entire length between Manhattan and the New Jersey Hudson Waterfront north to the Alpine Tower, while that along the East River ends southwest of LGA airspace at the northern end of Roosevelt Island. [20] [21]

As of 2014, about 1% of flights to the Port Authority-controlled airports use the Next Generation Air Transportation System, which relies on the Global Positioning System instead of radar. [22] 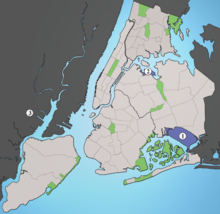 Opened in 1928, Newark Liberty International Airport (EWR) is considered the first major commercial airport in North America. Amelia Earhart dedicated the Newark Metropolitan Airport Administration Building in 1935. It is the fifth busiest international air gateway. [27] and the busiest in the region in number of flights. In 2003, Newark became the terminus of the world's longest non-stop scheduled airline route, Continental's service to Hong Kong. In 2004, Singapore Airlines broke Continental's record by starting direct 18-hour flights to Singapore. The airport is located in Newark, New Jersey, about 12 miles (19 km) west of downtown Manhattan. The top three international destinations from Newark are London, Toronto and Tel Aviv. [28] It connects to NJ Transit commuter trains and Amtrak intercity trains via the AirTrain Newark monorail.

LaGuardia Airport (LGA), the smallest of New York area's primary airports, handles domestic air service and flights to Canada. It is named for Fiorello H. La Guardia, the city's Depression-era mayor known as a reformist and strong supporter of the New Deal. The airport is located in northern Queens, about 6 miles (9.7 km) from downtown Manhattan.

In 1984, a "perimeter rule" was introduced to reduce congestion, which prohibits incoming and outgoing flights that exceed 1,500 miles (2,400 km) except on Saturdays, when the ban is lifted, and to Denver, Colorado, which has a grandfathered exemption. As a result, most transcontinental and international flights use JFK and Newark (although there are short-haul international flights to the Canadian cities of Toronto, Montreal and Ottawa). [29]

Plans were announced in July 2015 to entirely rebuild LaGuardia Airport itself in a multibillion-dollar project to replace its aging facilities, and this project would accommodate a new AirTrain LaGuardia connection. [30] [31] [32]

Long Island MacArthur Airport (ISP) is located in the town of Islip in Suffolk County, New York, about 44 miles (71 km) east of Manhattan. It is owned by the Town of Islip, and has been designated by the FAA an official New York airport. [33]

Stewart International Airport (SWF) is located about 60 miles (97 km) northwest of the city in Orange County, New York. In 2007, the Port Authority of New York and New Jersey took control of operations at Stewart and has committed $500 million to its upgrade and expansion. [34] From June 2017 to September 2019 Stewart was the only secondary airport in the New York metro area offering flights to Europe. This was enabled by a main runway of over 11,000 feet.

Trenton–Mercer Airport (TTN) is located in and owned by Mercer County, New Jersey, near Trenton. It began to see a return of scheduled passenger service in 2013, which has been inconsistent over the airport's history.

Westchester County Airport (HPN) is located in and owned by Westchester County, New York, about 33 miles (53 km) north of the city, along the border with Connecticut. It sees service to a dozen destinations, and has seen increases of nearly 100,000 enplanements in the period from 2008 to 2010. [35] [36]

Teterboro Airport (TEB) is a general aviation reliever airport located in the Boroughs of Teterboro, Moonachie, and Hasbrouck Heights in Bergen County, New Jersey. It is operated by the Port Authority of New York and New Jersey. The airport is 12 miles (19 km) from midtown Manhattan in the New Jersey Meadowlands, which makes it very popular for private and corporate aircraft.

In addition, there are many smaller general aviation airports, as well as several seaplane bases in the port district and the adjoining region. Among them are:

There are numerous heliports located around the New York metro area. [37] Three of the busiest are located in Manhattan:

An average of 40% of passenger aircraft delays in the U.S. originated in the New York metropolitan area, some in the area and others due to cascading effects. [39] One-third of aircraft in the national airspace system move through the New York area at some point during a typical day. [40] The three major airports rank among the worst airports for delays the USA despite FAA caps limiting the number of takeoffs and landings per hour to 83 at both JFK and EWR and 71 at LGA. [41] While an increased demand for passengers and freight is foreseen limited land availability in the heavily urbanized area and prohibitive costs constrict expansion of JFK, EWR, and LGA. Approaches to mitigate delays and increase capacity include costly runway expansion projects and greater use of reliever airports. Before the establishment of the Great Swamp National Wildlife Refuge in 1960 the PANYNJ had proposed to build an airport at the location in Morris County, New Jersey but was widely opposed. Studies conducted by the Federal Aviation Authority, the Regional Plan Association, the PANYNJ, and others have identified few sites within the region which would satisfy the requirements for a major airport and evaluated potential dispersion of flights to outlying commercial airports, including Atlantic City International Airport (ACY), Lehigh Valley International Airport (ABE), Bradley International Airport (BDL), and Tweed New Haven Regional Airport (HVN). [42] [43] [44] In July 2013, the PANYNJ took control of ACY. [45]

The first municipal airport in New York City was Floyd Bennett Field, developed to lure business away from Newark, but it was ultimately unsuccessful as a general aviation airport and closed in 1941. [17] It is now a historic, recreational, and sporting area and part of the Gateway National Recreation Area, which is in turn part of the National Park System (NPS). The New York City Police Department leases facilities for their helicopter operations from the NPS there.