The first airplane landed at what is now Trenton–Mercer Airport in 1907, in what was then Alfred Reeder's farm field, just off of Bear Tavern Road in Ewing. Twenty-two years later in 1929 Skillman Airport opened to the public.

During World War II the nearby General Motors Inland Fisher Guide Plant ceased producing civilian vehicles and began making Grumman TBF Avenger carrier-based torpedo bombers for the United States Navy. Skillman Airport expanded to accommodate test flights of this aircraft, and after the airport returned to county control following the end of the war it was renamed Mercer County Airport. [note 1] After the war, the navy reestablished a presence with the construction of Naval Air Warfare Center Trenton adjacent to the airport, which remained open until 1997. [note 2]

Airport Air Traffic Control operations based in the control tower were 6 AM to Midnight during the 1980s and early 1990s. Since January 1994, tower operations have been shortened to 6 AM to 10 PM.

In 1995 the airport's name was changed to Trenton–Mercer Airport in an effort to identify it with the city of Trenton (the capital of New Jersey and county seat of Mercer County).

For many years the county has planned to expand the airport and attract more commercial airlines. These plans have been opposed by residents along the flight path living in Ewing, Lawrence, Hopewell, and Pennington. Opposition has also been expressed in Pennsylvania among residents living along the flight path in Yardley and Lower Makefield.

In 1994 as a cost-cutting measure, the Mercer County Airport Police and Fire Department was disbanded and replaced by the Mercer County Sheriff's Office (police) and ProTec Fire Services (Aircraft Fire Rescue).

Aerial view of the airport from the west 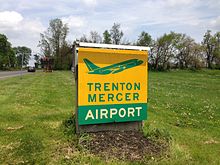 Mercer County has a variety of taxi cab companies that operate from the Trenton Transit Center, which services the Northeast Corridor via Amtrak, New Jersey Transit and SEPTA railroads. [13]

No public transportation options pick up or drop off passengers in front of the terminal, but nearby bus and train routes exist. There are no sidewalks, nor shoulders, along the roads that lead to the passenger terminal.

The Trenton–Mercer Airport is within walking distance (1.5 miles) of the West Trenton train station. This train station serves Philadelphia and points south, but not New York or points north.

On weekdays, NJ Transit's 607 bus stops just outside the airport grounds, at Bear Tavern Rd and Cardinal Dr. The 608 bus, which connects to the Hamilton NJT Train Station and Trenton Transit Center, stops less than a mile from the airport terminal at the intersection of Grand Ave and Upper Ferry Rd. [14]

Frontier Airlines Airbus A319 boarding at the airport 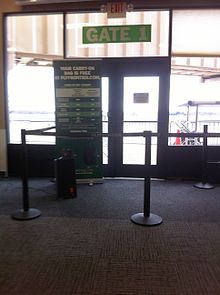 The airport is home to Army Aviation Support Facility #2 and the 1st Battalion, 150th Aviation Regiment, otherwise known as the 1-150th General Support Aviation Battalion of the New Jersey Army National Guard. Equipped with UH-60 Blackhawk helicopters, the battalion provides ground force commanders of the 42nd Infantry Division (Mechanized) with additional air assault, transportation, re-supply, and command and control assets. In its state role under Title 32 United States Code, the unit also provides emergency logistical support in response to disasters or any other emergency support as may be directed by the Governor of New Jersey. [18]

The airport is also home to the Twin Pine Composite Squadron (NER-NJ-092) of the New Jersey Wing of the Civil Air Patrol. [19]

Trenton–Mercer Airport has one terminal with two gates. Gate 2 is divided into 3 sub gates labeled Gates 2–4. On the upper level of the terminal (before security) is an observation lounge as well as a restaurant, Sky Lounge at Ewing, serving pub food. Sky Lounge has another location past security near Gate 1 that serves drinks and pre-packaged sandwiches and wraps. Parking is $2 per hour and $8 per day.

On November 8, 2013, Mercer County opened a renovated terminal, including a new modular trailer baggage claim outside the terminal, restrooms in the gate area (there were previously no restrooms past security), and—in the area originally occupied by the baggage claim—additional passenger seating and a new gate. [20]

In August 2014, the Airport was awarded $2.2 million to rehabilitate 3 taxiways. A spokesperson for the county said that this was the first phase of a three-year plan to make further improvements. [21]

In a study commissioned by the county released in 2013, a new passenger terminal, a corporate office park, medical offices and laboratories, and commercial space would be part of a plan to develop available land at the airport. [22] On September 29, 2016, Mercer County in conjunction with firms Urban Engineers and McFarland Johnson held a public meeting at the nearby West Trenton Ballroom meeting hall. Several aspects of the proposed master plan for the airport were revealed. Plans call for a new terminal sized at 115,000–125,000 square feet. The current terminal is 24,780 square feet. The rental car area will house up to five rental car agencies and with concession, restrooms and gate area expanding to four times the current area. [23]