With over 700 daily flights to 135 domestic and international destinations, FLL has become an intercontinental gateway since the late 1990s, although Miami International Airport still handles most long-haul flights. FLL serves as a primary airport for the Miami, Fort Lauderdale, Pompano Beach, and Boca Raton areas. The airport is the primary base for Spirit Airlines and is also a base for Allegiant Air, JetBlue Airways, and Norwegian Air Shuttle. FLL is classified by the US Federal Aviation Administration as a "major hub" facility serving commercial air traffic. [1]

Merle Fogg Airport opened on an abandoned 9-hole golf course on May 1, 1929. At the start of World War II, it was commissioned by the United States Navy and renamed Naval Air Station Fort Lauderdale. The base was initially used for refitting civil airliners for military service before they were ferried across the Atlantic to Europe and North Africa. NAS Fort Lauderdale later became a main training base for Naval Aviators and enlisted naval air crewmen flying the Grumman TBF and TBM Avenger for the U.S. Navy and U.S. Marine Corps aboard aircraft carriers and from expeditionary airfields ashore. NAS Fort Lauderdale was the home base for Flight 19, the five TBM Avengers that disappeared in December 1945, leading in part to the notoriety of the Bermuda Triangle.

Commercial flights to Nassau began on June 2, 1953, and domestic flights began in 1958–1959: Northeast Airlines and National Airlines DC-6Bs flew nonstop to Idlewild, and Northeast flew nonstop to Washington National. In 1959 the airport opened its first permanent terminal building and assumed its current name.

Low-cost airline traffic grew in the 1990s, with Southwest opening its base in 1996, Spirit in 1999, and JetBlue in 2000. Spirit Airlines made FLL a hub in 2002. In 2003, JetBlue made FLL a focus city. US Airways also planned a hub at Fort Lauderdale in the mid-2000s as part of its reorganization strategy before its merger with America West. [7]

Low-cost competition forced several major legacy airlines to cut back service to FLL, with United pulling out of the airport entirely in 2008 [8] and American Airlines moving its New York and Los Angeles services to West Palm Beach in 2013. [9]

During the 2005 hurricane season FLL was affected by Hurricane Katrina and Hurricane Wilma. Katrina struck land in late August as a Category 1 and made landfall on Keating Beach just two miles from the airport (near the border of Broward and Miami–Dade counties) with 80 mph (130 km/h) winds but caused only minor damage; however, the airport was closed for about a 48-hour period. However, when Hurricane Wilma made landfall in October roof damage was reported along with broken windows, damaged jetways, and destroyed canopies. The airport was closed for a period of 5 days. Hurricane Wilma was a Category 2 when its center passed to the west of FLL.

On October 11, 2016, Emirates announced that they would operate a flight from Dubai to Ft. Lauderdale daily using a Boeing 777-200LR. The airline decided on Fort Lauderdale instead of Miami, which has longer runways and better facilities for widebody aircraft and long haul flights; FLL was chosen because of Emirates's codeshare agreement with JetBlue. [10] The service ended in 2020. [11]

In 2018, NORAD announced that it would be stationing fighter jets at the airport during President Donald Trump's trips to Mar-a-Lago. [12]

Silver Airways has its headquarters in Suite 201 of the 1100 Lee Wagener Blvd building. [14] [15] When Chalk's International Airlines existed, its headquarters was on the grounds of the airport in an unincorporated area. [16]

Fort Lauderdale–Hollywood International Airport has four terminals. Terminal 1, commonly referred to as "The New Terminal," opened in stages between 2001 and 2003 and was designed by Hellmuth, Obata and Kassabaum [17] and Cartaya Associates. [18] The other three terminals were constructed in 1986 and designed by Reynolds, Smith & Hills as part of a $263 million construction project. [19] Terminal 4, commonly referred to as the International Terminal, was inaugurated by a Concorde visit in 1983. Since 2005, T4 has been undergoing renovations and a major expansion designed by PGAL/Zyscovich joint venture. The airport announced that Terminal 1, common known as "The New Terminal", underwent $300 million makeover. Construction began in late 2015 and was completed in June 2017. [20] 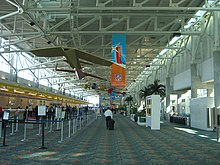 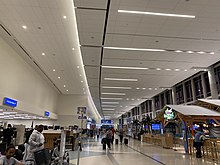 Terminal 1, known as the Yellow Terminal contains Concourses A, B & C and 23 gates. Concourse A mainly serves international travelers. United Airlines operates a United Club in Concourse C, which opened with the new Terminal in May 2001 as a Continental Airlines Presidents Club.

Terminal 4, known as the Green Terminal contains Concourse G with 14 gates. Concourse H closed in December 2017 and has since been demolished. The former Concourse H was reconfigured and redesigned by the architectural firms of PGAL/Zyscovich joint venture. The new three-story facility renamed Concourse G has 14 new gates, 11 of which are international/domestic capable and one arrivals area for bussing operations. New concessions and approximately 50,000 s.f. of administrative offices for the Aviation Department are being designed on the upper levels of the facility. An expanded Federal Inspection Services facility will also be included in the new Eastern Expansion construction.

Fort Lauderdale–Hollywood International Airport is near the Fort Lauderdale/Hollywood International Airport at Dania Beach train station, served by Amtrak intercity trains and Tri-Rail commuter trains. The latter provides a shuttle bus service from the station to three locations at the airport, all on the lower level: the west end of terminal 1, between terminals 2 and 3, and between terminals 3 and 4. The shuttles operate 7 days a week and are free for Tri-Rail customers.

The terminals are accessible by U.S. Route 1. Other major roads that border the airport include Florida State Road 818, Interstate 95, and Interstate 595. U.S. Route 1 includes an underpass under Runway 10R/28L.

Ride-sharing companies can also be used to and from the airport in designated pickup and drop-off places found between Terminals 1 and 2 and Terminals 3 and 4.

The airport also offers airport parking and operates a consolidated rental car facility which can be accessed from Terminal 1 by a short walk and from the other terminals by a free shuttle bus service.

Internationally known artist and sculptor Duane Hanson created an installation for his work "Vendor with Walkman" at the Departure Level of Terminal 3 at the airport. Hanson, who retired and died in nearby Boca Raton, created a seated middle-aged man wearing a red T-shirt, blue pants, baseball cap and listening to a walkman during a break. The installation accessories give additional clues to the narrative of the artwork: toy airplane, various signs, and announcement for the shop, janitorial supplies. [23] The artwork has since been moved to Terminal 1 Arrival Level.