From Wikipedia, the free encyclopedia
For other uses, see Shinjuku (disambiguation).
Special ward in Kantō, Japan

Shinjuku (新宿区, Shinjuku-ku) is a special ward in Tokyo, Japan. It is a major commercial and administrative centre, housing the northern half of the busiest railway station in the world ( Shinjuku Station) and the Tokyo Metropolitan Government Building, the administration centre for the government of Tokyo. As of 2018, the ward has an estimated population of 346,235, and a population density of 18,232 people per km2. The total area is 18.23 km2. [4] Since the end of the Second World War, Shinjuku has been a major secondary center of Tokyo ( fukutoshin), rivaling to the original city center in Marunouchi and Ginza. It literally means "New Inn Ward".

Shinjuku is also commonly used to refer to the entire area surrounding Shinjuku Station. The southern half of this area and of the station in fact belong to Yoyogi and Sendagaya districts of the neighboring Shibuya ward.

Shinjuku is surrounded by Chiyoda to the east; Bunkyo and Toshima to the north; Nakano to the west, and Shibuya and Minato to the south. [5]

The current city of Shinjuku grew out of several separate towns and villages, which have retained some distinctions despite growing together as part of the Tokyo metropolis.

"Shinjuku" is often popularly understood to mean the entire area surrounding Shinjuku Station, but the Shinjuku Southern Terrace complex and the areas to the west of the station and south of Kōshū Kaidō are part of the Yoyogi and Sendagaya districts of the special ward of Shibuya.

Naturally, most of Shinjuku is occupied by the Yodobashi Plateau, the most elevated portion of which extends through most of the Shinjuku Station area. The Kanda River runs through the Ochiai and Totsuka areas near sea level, but the Toshima Plateau also builds elevation in the northern extremities of Totsuka and Ochiai. The highest point in Shinjuku is Hakone-san in Toyama Park, 44.6 m above sea level. [7] 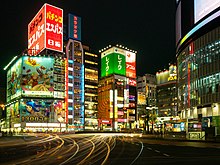 In 1634, during the Edo period, as the outer moat of the Edo Castle was built, a number of temples and shrines moved to the Yotsuya area on the western edge of Shinjuku. In 1698, Naitō-Shinjuku had developed as a new (shin) station ( shuku or juku) on the Kōshū Kaidō, one of the major highways of that era. Naitō was the family name of a daimyō whose mansion stood in the area; his land is now a public park, the Shinjuku Gyoen. In 1898, the Yodobashi Water Purification Plant, the city's first modern water treatment facility, was built in the area that is now between the park and the train station. [8]

In 1920, the town of Naitō-Shinjuku, which comprised large parts of present-day Shinjuku (the neighbourhood, not the municipality), parts of Nishi-Shinjuku and Kabukichō was integrated into Tokyo City. Shinjuku began to develop into its current form after the Great Kantō Earthquake in 1923, since the seismically stable area largely escaped the devastation. Consequently, West Shinjuku is one of the few areas in Tokyo with many skyscrapers.

The Tokyo air raids from May to August 1945 destroyed almost 90% of the buildings in the area in and around Shinjuku Station. [9] The pre-war form of Shinjuku, and the rest of Tokyo, for that matter, was retained after the war because the roads and rails, damaged as they were, remained, and these formed the heart of the Shinjuku in the post-war construction. Only in Kabuki-cho was a grand reconstruction plan put into action. [10]

The present ward was established on March 15, 1947 with the merger of the former wards of Yotsuya, Ushigome, and Yodobashi. It served as part of the athletics 50 km walk and marathon course during the 1964 Summer Olympics. [11] In the 1970s, the Yodobashi Water Purification Plant closed and was replaced by skyscrapers. [12]

In 1991, the Tokyo Metropolitan Government moved from the Marunouchi district of Chiyoda to the current building in Shinjuku. (The Tokyo International Forum stands on the former site vacated by the government.) 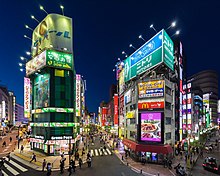 Northeastern Shinjuku has an active publishing industry and is home to the publishers Shinchosha [26] and Futabasha. [27] The main store of the Books Kinokuniya bookstore chain is also located in Shinjuku. 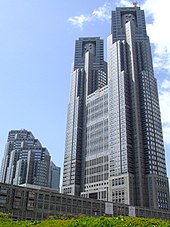 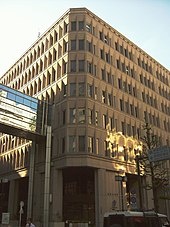 Like the other special wards of Tokyo, Shinjuku has a status equivalent to that of a city. The current mayor is Kenichi Yoshizumi. The ward council (区議会, kugikai) consists of 38 elected members; the Liberal Democratic Party and New Komeitō Party together currently hold a majority. The Democratic Party of Japan, Japanese Communist Party and the Social Democratic Party are also represented together with four independents. Shinjuku's city office (区役所, kuyakusho) is located on the southeastern edge of Kabukichō.

Shinjuku is also the location of the Tokyo Metropolitan Government. The governor's office, the metropolitan assembly chamber, and all administrative head offices are located in the Tokyo Metropolitan Government Building. Technically, Shinjuku is therefore the prefectural capital of Tokyo; but according to a statement by the governor's office, Tokyo (the – as administrative unit: former – Tokyo City, the area of today's 23 special wards collectively) can usually be considered the capital of Tokyo (prefecture/"Metropolis") for geographical purposes. The Geographical Survey Institute (Kokudo Chiriin) names Tōkyō (the city) as capital of Tōkyō-to (the prefecture/"Metropolis"). [29]

Shinjuku is a major urban transit hub. Shinjuku Station sees an estimated 3.64 million passengers pass through each day, making it the busiest station in the world. It houses interchanges to three subway lines and three privately owned commuter lines, as well as several JR lines.

A list of railway lines passing through and stations located within Shinjuku includes: 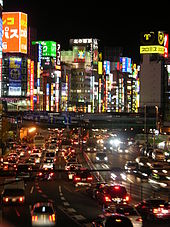 Public elementary and junior high schools in Shinjuku are operated by the Shinjuku City (the Shinjuku Ward) Board of Education (新宿区教育委員会).

There are several major hospitals located within the city limits.