From Wikipedia, the free encyclopedia
Special city in Chūbu, Japan 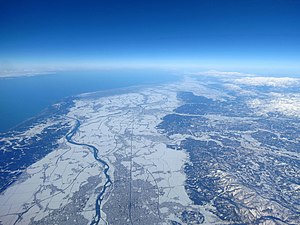 Nagaoka in winter from the sky

Nagaoka is in the center of Niigata prefecture and the surrounding Chūetsu region of Japan, between longitude 138°E and latitude 37°N. It is 80 minutes from Tokyo by way of the Joetsu Shinkansen or three hours on the Kan-Etsu Expressway and is considered a strategic traffic point in the region. Nagaoka was an inland city until January 1, 2006, when the city merged with four municipalities; two were touching the Sea of Japan. The Shinano River flows through the city from south to north and industrial development is on both banks of the river. The Higashiyama mountain range lies to the east.

Sado Island is connected by sea and air routes.

Per Japanese census data, [4] the population of Nagaoka peaked at around 1995 and has declined steadily since.

The area of present-day Nagaoka was part of ancient Echigo Province. Under the Tokugawa shogunate, a castle town was constructed by Hori Naoyori lord of Nagaoka Domain in 1616. However, as the initial castle was located in an area prone to flooding by the Shinano River, a new castle was built at the site of present-day Nagaoka Station in 1617. Nagaoka flourished as under the reign of the 13 generations of the Makino clan during the Edo period. In the Boshin War of 1868 during the Meiji Restoration, Nagaoka Domain was a member of the Ōuetsu Reppan Dōmei against the imperial forces, and the city was reduced to rubble during the Battle of Hokuetsu. A gift of one hundred sacks of rice from a neighboring province was sold to finance a new school during the reconstruction of Nagaoka, from which the anecdote of Kome Hyappyo was born.

With the Meiji period creation of the modern municipalities system on April 1, 1889, the towns of Nagaoka and Nagaoka-honmachi were established. The two towns were merged on November 1, 1901 with the towns of Senju, Kusouzu, Ara, and village of Ouchi to form the modern town of Nagaoka, which was then raised to city status on April 1, 1906.

Nagaoka has a mayor-council form of government with a directly elected mayor and a unicameral city legislature of 34 members. The city contributes six members to the Niigata Prefectural Assembly. 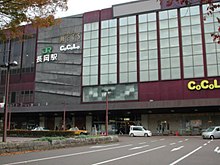 Local bus service in Nagaoka is managed by Echigo Kotsu. The bus terminal located at the east entrance of Nagaoka Station serves as the hub for the route network. Service extends to all parts of the city as well as many outlying suburban areas and villages. A bus service connecting Nagaoka Station to Niigata, Niigata Station runs at intervals of approximately 30 minutes. Additionally, long-distance bus services are available to all major cities in the prefecture as well as Tokyo.

Nagaoka is twinned with: [6]